Will our hopes prevent the collapse? 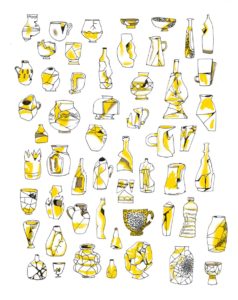 We humans are probably at an advantage. We experience many sorrows, our hearts are fragile and often bruised, but what ecstasies accompany our lives! The stories of the poets have testified for thousands of years to our ability to rise, to free ourselves from the constraints of the world, from its frustrating materiality, from its finitude. If we are so close to our chimpanzee brothers and their babies play just like our children, do they also take pleasure in voluntarily inventing stories from scratch, simply to travel to other worlds, as far away as possible from the frustrations of their daily lives?

What a privilege, what happiness!

While the real world, the one we are forced to interact with, confesses more and more every day its difficulty to bend to the shape of our dreams, we must now question ourselves on what these stories we tell ourselves could hide from what we would not master. The manic climate, the dying oceans, the devastated forests, the fields being sterilized, the plant and animal species disappearing faster than we can keep track of them… We have to consider that something is overtaking us, against our good will and in spite of our most fervent ecological activism. In the projects that we have envisaged for the future, sincere projects that may have aroused great personal enthusiasm, have we not forgotten to consider some constraints, some of which are nevertheless elementary?

Our investment in the climate issue, for example, suffers from a very large scotoma (a blind spot). Climatologists estimate that the climate inertia, i.e. the time it takes for the atmosphere to warm up following an increase inCO2 levels, could be around 40 years (between 25 and 50 years depending on the study)(1). This means that our investment in climate protection is necessarily out of step with reality. If the value of 40 years of inertia is retained, the climate of today, which rightly worries us, corresponds to the atmosphericCO2 rate of the 70s, whereas the climate of the 2050s is… already written! From the 70’s of the last century to the 2050’s… our psychological and emotional gap on the reality of the problem could be 80 years.

What about economic competition? Of course, we can hope that international actors will massively reduce greenhouse gas emissions, especially following COP21. But today, 80% of the world’s energy supply comes from fossil fuels, which have the best Energy Rate of Return(2), renewable energies are developing even more slowly than fossil fuels, and the decoupling of renewable energies fromCO2 emissions has never really been observed on a global scale. So if we accept that some mathematical formulas (Kaya equation) do describe real phenomena and that the strong link between energy, CO2, GDP and demography remains relevant(3)Which country will be the first to decide, for a distant ecological benefit, to take a step backwards in the economic competition by reducing its energy consumption, which will lower its GDP and make it take the immediate risk of losing its integrity or its sovereignty?

So we hope to reduce our greenhouse gas emissions, despite this perhaps irrevocable link between energy, pollution and the possibility of defending our interests. But by how much? And what exactly will that do? Have we considered that a reduction in emissions always continues to increase atmosphericCO2? If, for example, we were to reduce our emissions to the level of the 1970s,CO2 would still be increasing at a rate comparable to that of the 1970s, a rate that was already too fast, as we have seen, not to disrupt the climate.

One last point. We sometimes consider converting our supplies from fossil fuels to biomass (wood, plants, etc.). But life is heterotrophic. It feeds on itself (except for plants and certain bacteria at the base of the food chain). Burning forests for heating, building a wooden frame or garden chairs (which will have to be treated with insecticides), is preventing millions of micro-organisms from feeding. These will disappear little by little from the place of forest exploitation and will no longer be able to be eaten by insects, which will also disappear, which will no longer feed the birds whose reduced population will no longer allow the dissemination of seeds, which will prevent the natural renewal of the biotope… and this until the risk of systemic collapse leading to desertification. There is no virtuous cycle to the exploitation of biomass by humans, it is always more or less starving life.

It may be that some of the stories we tell ourselves about the ecological future opportunistically shield us from what might worry us most. Whatever we do, even less, even better, we participate in a process that leads to a reduction of possibilities and to the destruction of the vital ecological balance on which we depend. Unless we become hunter-gatherers once and for all tomorrow — and what about this possibility for 8 billion humans in the heart of an extremely impoverished nature? — we will continue to impact our environment, in one way or another, in a cumulative and irreversible way.

Our societies will therefore collapse, but not because of physical determinisms, with which living beings before us were able to cope very well, as our chimpanzee brothers still testify. Our societies will collapse because when we have a problem, we tell ourselves a story that we believe more strongly than the perceived reality. Once we have passed the « ecological singularity », that is to say the moment of our existence from which it will no longer be possible to deny that our development is complete, we will be ready to put in place the necessary arrangements — not the solutions — to make things work out for the best, despite everything. A slogan has emerged spontaneously in recent weeks that illustrates the transition we must make in all areas. We like to laugh at this slogan, but with a slightly tense laugh. Thanks to the efforts that we will all make together from now on, another end of the world is possible.

Adrastia is an association of citizens who wish to work together to anticipate as well as possible a risk of collapse, considered as inescapable in the long run and probably much less distant than we would hope. http://adrastia.org