Kairos, a cooperative and voluntary project, relies on a committed team, is fed by various and varied contributions, and is above all a newspaper of opinion, resistant, open and collective. It is not linked to any party or union. Journal promoting the values of the objection of growth, it defends the freedom and the critical spirit, and thus the sense of limits and the respect of the living Nature.

Kairos wants to break with the dominant ideologies of society: consumerism, growth, development, progress, commodification of the world and of the living, labourism and employability, competitiveness, competition and « free trade »… which seem to us to be so many mechanisms of exploitation by man of Man and Nature, and negations of what makes life beautiful, good and true. Our journal is written with the awareness that life is strong but existence is fragile, that everything is ephemeral.

Kairos denounces the spirit of the machine: productivism, the logic of always more, of infinite and indefinite accumulation to satisfy the growth of the GDP, without questioning the meaning and the necessity of the production, without respecting consequently the Nature and the human.

Kairos seeks to understand, and therefore searches for the past, present, and future forces and logics that make the world what it is and what it is becoming.

Kairos knows that the individual cannot do everything, but that together everything is possible, the best and the worst. Our questioning does not concern only the distant structures of power, but also the possibility of acting of each one, alone and associated, here and now. 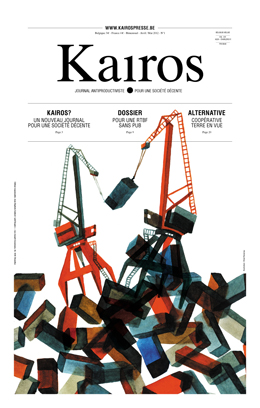 Kairos proposes other possibilities, which often already exist or have existed. To leave the only denunciatory pessimism and to find the ways of decent societies, societies which do not humiliate, and of simple happiness. Decent societies in which justice is earnestly sought by all, including leaders and institutions. Societies in which the strongest do not exploit the weakest, in which people are not reduced to their functions of production and consumption; societies that go beyond the binary categories (worker/unemployed, young/old, foreign/indigenous, …) and their associated stereotypes. Societies at the heart of which the brotherhood of Man is recognized and cultivated as a condition of their individual and collective autonomy and as a basis for solidarity. Societies that know how to limit themselves, that refuse to accept the « one-size-fits-all sense of history » and cherish the precious knowledge of the past, which is indispensable for the future.

Kairos is part of its time, which is an « opportune moment », that of the conjunction of crises and the hope of an upheaval of consciousness.

Kairos exists only because of its readers. Who, like us, think that it is already late, and that now is the time to act.