Electromagnetic waves: a scourge that pays off 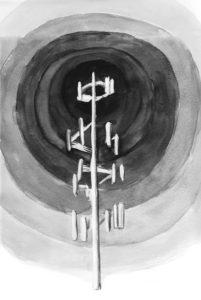 On New Year’s Eve 2013 in Belgium, over 72 million SMS messages were sent. Every year, this figure swells, relentlessly demonstrating the growing success of mobile telephony and the communication technologies that make it possible. To allow its maximum deployment, the relay antennas have therefore colonized our cities and our countryside in a few decades, modifying our electromagnetic environment in a considerable way: in the urban space, the electromagnetic radiation, in a range of frequencies going from 300 MHz to 300 Ghz, often reaches levels 10 million times higher than the natural radiation…

In a society that prides itself on being on the cutting edge of progress and prides itself on being guided by reason, one would have thought that this technological evolution would be accompanied by research on the possible risks of this new electromagnetic environment. This will not be the case, the lobbies, the telecommunication companies, the governments and the media being too much intoxicated by the unprecedented accumulation of gains, everything was launched without any study of the effects on the human body.

The first alerts will come from those sentinels that are the birds and the bees, which use the variations of the magnetic field and the ambient electromagnetic vibrations to orient themselves. Among the recent studies, those of Marie-Claire Cammaerts-Tricot focused on the effects of the electromagnetic radiations of the mobile telephony on the colonies of ants (Article’What do rats and ants tell us’). His results are without appeal: ants placed in an electromagnetic environment like the one of the GSM, have a very high mortality rate and behave abnormally: impossible movement, curling up of the antennas, impossibility to return to the nest, to feed, to communicate, stop the larval development… Ants are a bio-indicator and these results illustrate the impact of mobile telephony on all living beings. The study supervised by André Vander Vorst on rats showed a mortality rate twice as high in rats exposed to microwaves and major memory disorders.

The most worrying aspect of the project is the blocking and intimidation of those who try to establish the scientific facts, disregarding any historical teaching (Article ‘Profession? Manufacturer of polemics’). We have the data, it’s there! (Article’Wireless radiation protection standards protect industry, not humans’) But scientific truths don’t always mix well with our acquired technophile certainties and the sacrosanct belief in renewed growth. We would not shut down cell phone manufacturing plants for a moratorium, especially in times of crisis! Their production was not stopped even though those who sell them knew very well the blood, wars and pollution that their production required (Article’Deadly extraction’).

The others, i.e. « the people », are mostly kept away from these « bad » (because disturbing) news, the press being too much in need of the advertising revenues for the cell phones and other associated gadgets they sell us in their pages. Left in ignorance, the habit of use has thus given way to dependence: the mobile phone has become for many an indispensable technical prosthesis (Article’The cell phone: mirror of our societies’). And the more this society kills the possibilities of choice, the more it touts the subject as free to choose.

However, it is not less than our capacity to think that is at stake here. A young child — when the work of indoctrination at school has not yet been able to produce its effects — in the presence of all the elements of information on the object: the manufacturing process of a cell phone, the studies on the harmfulness of electromagnetic waves, the effects on sociability and the relationship with others, etc., this child could therefore quite easily make the relevant choice when faced with the question of whether or not it is necessary to continue to produce the harmful object.

In order to change, we must first recover a sense of what is essential and distinguish it from the incidental. It will be difficult… « More than 60% of Nigerians have access to cell phones, a feat in a country three times the size of California, with poor roads, unreliable postal service and two phone lines per thousand people. The price of the cheapest cell phone would allow a Nigerian to buy twelve and a half kilos of millet, enough to feed a family of five for five days. Nevertheless, the number of subscriptions has exploded in Africa, from 12 million in 2000 to 376 million in 2008 (1).

Alexandre Penasse, Coordinator of the file
- In collaboration with the Dé-Mobilisation collective
Notes et références