Virus and other modern joys 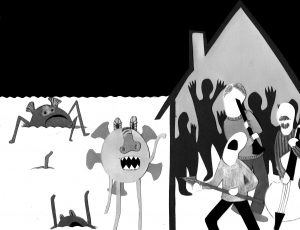 I will say very little about the virus; we know enough about it in the cottages and in the ministerial cabinets of our amazing little kingdom. I won’t say too much about the extraordinary decision-makers of the right, the center or the left of the various places of power that the country has and whose prowess is rightly hailed by a growing number of citizens. I’ll tell you about the future instead; you’ll laugh.

Because let’s be clear: we’re not in a bit of trouble, to put it as plainly as possible. This little thing, which is not even a quarter or a hundredth of a cell, which did not even invite itself and fell on us without warning, could very well, if it felt like it, continue its little way and even take a highway for a while, perfectly at ease among us. In which case, second, third, fourth wave, what have you, we’ll have to deal with it, as they say, which is not easy and even perfectly problematic, to say the least. It is impossible to say or even to imagine the innumerable ravages to be expected if we stick to this hypothesis. But, considering the other side of the coin, we can just as easily say that, by miracle or by fatigue, the thing gets tired of us and, at the end of the race, withdraws on the tips of its little feet. OUF! Let us say then. And there will be parties everywhere, thousands of people laughing in the streets, on the squares and boulevards, the bistros will be taken by storm and will not be empty for weeks on end, or even more if you like, in short, it will be a lot of fun.

Now, we will remember that, at the height of the first wave, many voices rose above the fray, a bit like in rugby, when a player grabs the oval ball, slips it to a teammate who goes off to score an anthology try — voices, therefore, shouts, even, to say that, once this crisis and the wounds were healed, it was necessary, by all means, to move on. To make a long story short, the message was the following: the world of before is over, the world of now is over; we can’t go on « like this » anymore. Very well. We hear some nice ones here and there and we read just as many, coming from highly educated people, specialized in this or that field of life in general, economics, social sciences and all those kinds of things. From which it emerges that we must put an end to the ravages of capitalism and, therefore, purely and simply abolish it; which is, in itself, a very good idea, which I share with enthusiasm. BUT who, what, how, where, when, with what tools or weapons? Similarly with this other great suggestion: it would be enough to decrease. Very well; the questions raised above are valid for this case, so I won’t repeat myself.

Let’s summarize. If the world could seem hostile in a thousand ways to our distant ancestors, prehistoric men, Gauls and other poor serfs of the Middle Ages, victims of the whims of their lords, of hunger, of epidemics of all kinds — yes, already! — of wars and other distractions of the time, we will have to recognize that ours has nothing to envy to those that preceded, or then, so little. Because, beyond the current viral invasion, much more serious problems, or just as much, if one prefers, are looming on our horizon, while we are busy trying to see clearly what is happening to us. It is not that the end of the world is imminent or for next week, no, of course, but it is quite obvious that the survival of our miserable species is only held by very fragile and thin threads. Whether one is alarmed or considers it unimportant, it is up to each one to appreciate it. For my part, I must confess that, given the immense damage inflicted on our good old earth and the millions of living species that have accompanied us since the dawn of time and that we continue to massacre in a thousand ways, for my part, as I was saying, the possible disappearance — I don’t say desirable! — of the human race would not seem to me to be a catastrophe if one wants to place oneself from the point of view of the immensity of the infinity of the Universe where we barely appear as the millionth part of a grain of sand.

But the fact remains that, in addition to the inquisition, the pyres, the torture chambers, Auschwitz, the atomic bomb and other distractions, we also invented the violin, the slide trombone, poetry, literature, oil painting; in short, so many things that are not unimportant and that embellish our daily life. And then, isn’t it, there is love in all its forms: the tenderness, the beauty of the looks and the loving gestures, the little old men who trot together and hold hands under the moved look of the onlookers installed at the terraces of the cafés (when they are open). In short, everything is not to be thrown away, finally; and there are thus, in spite of everything, some reasons to like to be of this world; and to hope that it lasts a little more.

But there is a great urgency to get it back on track, we will all agree on that. And that it can be an exciting project, we will also agree. But, by golly, we’ll have to roll up our sleeves! And one of these days, we’ll have to move from books and newspaper articles full of good intentions and brimming with the best ideas, to practical work. So, once again, who, when, how, a date for the big night? Huge crowds everywhere, invaded palaces, overthrown governments, endless parties, free access to the essentials as Paul Jorion suggests, a fair sharing of all the wealth that the world of the wealthy has appropriated? I don’t know; I’m like you, I dream of seeing and living such wonders before I leave this world; and dancing on its ruins