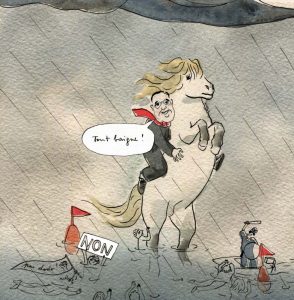 There is one who will have really finished to annoy everyone and the others with, it is the very ineffable and unplayable François Hollande, former and — except cardio-vascular accident or scooter — for one more year, president of the French Republic. His last public interventions, on television, on the radio or in front of some lectern and some assembly, show to what degree of idiocy and blindness the practice of power can lead. In the latest polling estimates, the character is credited with the support of some 14% of the potential electorate; his prime minister, the shady Valls, for his part, is not outdone in terms of the number of those who appreciate his action. This does not seem to worry or surprise the President of the Elysée and his neighbor in Matignon who, against strong winds and tides (social) do and continue to do as they please in all areas.

Let’s skip the details of the denials and blunders that have accumulated since Flamby took office, the list is too long and indigestible. What we will remember is the nerve of the character who repeats everywhere with a pathetic stubbornness that « France is doing better », that « the recovery is here », that « Unemployment will eventually go down » since he keeps saying it and the law that is supposed to modify the Labor Code « is an excellent thing ». The proof: it had to be fi nally adopted with the disinterested help of the famous article 49,3 and in the general enthusiasm, in flagrant contradiction with the state of the opinion and the demonstrations which multiplied everywhere in a more and more detestable, even worrying, climate. Because if, from their point of view, the police officers of France and Navarre had good reasons to protest on May 18 against the mistrust and hatred that they inspire to the irreducible villain-cassaders (among whom some see clever provocateurs under orders), it remains that the numerous images of bludgeoning and various blows in the face of people of all ages and both sexes, widely disseminated by social networks, testify to an aggressiveness and a violence often disproportionate on the part of the civil servants of the « maintenance of order. By the way, we have the right to wonder what comrade Hollande — and his social minister of the interior — thought of the support of the elected members of the Front for the angry policemen in the Place de la République, both of them having fun to have their portrait drawn in a frank, funny and beautiful camaraderie. What emerges from all of this is, of course, that the policies implemented over the past four years bear little resemblance to the « left-wing » policies that many expected from the candidate I am the President who continues to play his little political score with the sole perspective of his hypothetical renewal at the head of the country, just to finish the job. And, certainly, it will not be a pleasure game in view of the latest developments in a conflict that opposes a growing number of employees, all sectors combined, to an executive that does not intend to let go of decisions that have been taken with the brutality and contempt that we know. As for the probable outcome of this arm wrestling match, it is nothing less than uncertain and, by the time you read this column, the die will have been cast and it will not be down to chance, but only to the determination and obstinacy of one of the two opponents.

If this column seems to focus too much on the situation of our big cousin rather than on the affairs of the little piece of territory we share, don’t see any lack of interest in what may rightly seem to you to be neglected here. It is simply that what is lived and debated on both sides of the thin border that separates us offers similarities that must be taken into account. On both sides, we are witnessing a significant and increasingly combative rise in the forces of challenging the policies of regression and frontal attacks on social gains, implemented by the two executives. That the motives and reasons for this radicalization are, again and again, caricatured and misrepresented by commentators and editorialists in the orders shows that the crisis that is shaking the two countries is no longer based on strictly sectoral questions, but that, more and more, the awareness of the fact that it is a whole system that needs to be put down, is asserting itself. Some enlightened consciences, all over the world, indicate new paths to take; starting with the thought of and about the world, which must be radically turned around. Then, very concretely, it is imperative to bring up to date other ways of producing what we have At thesame time, it is necessary to promote a new art of living detached from the contingencies and diktats of a pseudo-economic science that we know is exclusively at the service of the dominant classes. There are many knots to be untied; the task is immense, as we also know. And it is only collectively, universally that we must, as soon as possible, tackle this historic work. We are in front of a blank page on which everything, absolutely everything, has to be rewritten and the present struggles, as long as we give them a resolutely new meaning, far from the dominant clichés, will perhaps be part of the radical upheaval to come.