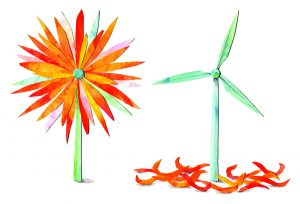 Many environmentalists, long-time or more recently acquired to the cause, develop a total confidence in the so-called renewable energies in opposition to the Evil that constitute the fossil energies. Renewables would be virtuous and the solution to the « ecological transition » or « energy ». However, the different energy sources often have as their objective the production of electricity.

During a weekend spent with the association Technologos at the Amassada (which means assembly in Occitan), a place of struggle against the construction of an electric super-transformer, we noted with regret that among the ecological struggles around energy and infrastructures in the world (mega-dams, coal, shale gas…) none of them went as far as questioning the electric purpose. Electricity production, as well as the extractivism associated with it, follows an exponential curve and despite this, the electricians are never pinned down by environmentalists. Especially since China Energy, for example, emits four times the amount of GHG emissions of the world’s four largest oil companies.

STORY OF A STRUGGLE AGAINST THIS GREEN CAPITALISM IN PERMANENT RECOVERY

At the Amassada, Saint-Victor-et-Melvieu in Aveyron, one can read  » RTE dégage! The Réseau de transport d’électricité is a subsidiary of EDF, a public company in charge of high voltage electricity transmission, under a public service contract, but despite this it passes on all its costs to users. His intention is to install a giant electrical transformer as well as an industrial wind farm. The transformer would occupy no less than 5 to 6 hectares of agricultural land, which is the best on the plateau. However, the Alur law, as well as the Parc régional des Grandes Causses, prohibit the removal of agricultural land. RTE, like EDF with nuclear power, therefore buys land with the agreement of the municipalities by paying them a sum of 600,000€ per year, as is the case for the municipality of Saint-Victor-et-Melvieu.

In early 2010, the mayor validated the project without consulting farmers and residents and falsified a record of the City Council’s deliberations where the issue was not discussed.

Two councilwomen are not happy with this decision and are resisting. The Plateau survolté association is created and seeks to inform the local population. 80% of the inhabitants of the commune sign a petition which is sent to the prefect but this one will remain dead letter. The association organizes public meetings and actively mobilizes during the public utility inquiry.

In the 2014 municipal elections, a new mayor was elected on a list opposing the project. But the mobilization against the project remains complicated because of the hostility of the other mayors of the community of communes. During the winter of 2014–15, with the owner’s consent, a house is built in the heart of the impacted land. In 2017, 134 « indivisibles » signed the deed of undivided ownership of the occupied parcel, as was done in the past in Larzac, with the aim of slowing down the expropriation. In 2017 is also created another association, The Rural University of South Aveyron, with the objective of  » developing a capacity to better think and act in favor of the life and safeguarding of rural territories . »

Despite the opposition, Nicolas Hulot signed in June 2018 the decree of public utility that authorized the transfo. In August 2018, an appeal was filed, with the arguments of lack of impact study, non-consultation and non-utility of the project. In 2019 the investigation has just been completed and the case will be tried in late 2020.

ACCUMULATION RATHER THAN TRANSITION

In December 2018 the prefect had ordered the eviction of the inhabitants of the place in question, the Amassada or assembly in Occitan. Then he ordered a new one in June 2019. The result of the repression: arrests, charges for  » criminal association « ,  » obstruction of traffic « , summary proceedings with requests for deportation and fingerprinting and DNA testing. In general, the relationship with official environmentalists is complicated. According to them, wind energy, like all « green » energies, must be defended without distinction. On the fight against industrial wind power, Europe Ecologie Les Verts as well as the Confédération paysanne, positions are divided. José Bové ended up taking a position in favor of the project in the name of the defense of wind power in opposition to nuclear power.

Beyond the political and financial maneuvers, there is also an ecological and energy cost that is far from negligible. 1,500 tons of buried concrete are needed to build and install these wind turbines. Numerous metals of varying degrees of rarity, whose extraction is polluting, are essential, as are batteries for storing energy.

The debates around ecology and climate are now framed under the banner of the expression « energy transition ». Jean-Baptiste Fressoz has shown in numerous texts and speeches that the expression « energy transition » is a source of confusion. At the Amassada, many people also denounced these projects of « transition » organized by the various powers, highlighting that there is no transition but rather an accumulation, as so many energy projects, such as the giant transformer that RTE wants to install in Saint-Victor-et-Melvieu.

The logic is always the same: more production for more consumption and electricity would be a primary need that cannot be discussed, but when we think about the uses in industry as well as in the domestic and service sectors, consumption could be much lower and avoid this kind of devastation of the territory.

The promotion of renewable energies could be accompanied by a reduction in consumption in parallel with their relocation, and not pursue an imaginary and a functioning calling for more and more production. As François Jarrige wrote in La Décroissance of February 2019,  » Wind power will be useful and even necessary, but it will never be able to produce the energy abundance that cheap coal and oil have offered us for decades. It will have its place in a decentralized energy mix, adapted to local needs, but it cannot be the miracle solution that so many actors are frantically seeking « .