TO PUT AN END TO SYNTHETIC PESTICIDES 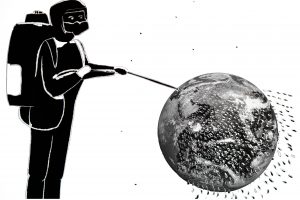 Since the beginning of industrial agriculture, the use of pesticides has gradually become commonplace in the world. While they are presented as phytosanitary products, i.e. responsible for the protection of plants, it appears more and more obvious that the term pesticide with its suffix « cide » is the most appropriate. Because herbicides kill plants, insecticides kill insects, fungicides kill fungi and yeasts and not only the allegedly targeted individuals.

As early as 1962, the American biologist Rachel Carson launched a paving stone in the pond with the publication of SilentSpring. This premonitory book announced the ecological catastrophe to come with the programmed disappearance of the birds. It questioned Monsanto’s flagship product, DDT, and all organochlorine pesticides accused of threatening living organisms and, at the end of the ecological chain, man himself. It is true that the toxicity of organochlorines is very high and that they are not easily biodegradable so that they accumulate in food chains.

However, it was not until 1978 that Europe took a decision that was long overdue (Directive 79/117/EEC of 21/12/1978). This ban only occurred because of the availability of substances presented as less problematic for the environment, the organophosphates, synthetic compounds containing carbon and phosphorus. Unlike organochlorines, they do not have significant persistence in the environment; however, they have a very high acute toxicity. They are therefore very dangerous for the farmers and their relatives. Similarly, carbamates, both insecticides and fungicides, have a mechanism of action comparable to that of organophosphates. The effect on the nervous system is faster but less persistent.

The risks associated with these two families of insecticides have led to the development of substitutes presented as less toxic, or even as quasi-ecological, pyrethroids, whose structure is inspired by that of pyrethrin, a natural insecticide, present in pyrethrum, a plant related to chrysanthemum. But while natural pyrethrin breaks down under the effect of light, pyrethroids have a much longer half-life. Moreover, their neurotoxic properties make them very dangerous for humans in case of inhalation or skin absorption. However, the creativity of the scientists of the phytopharmaceutical industry remained efficient: the neonicotinoids appeared to fight against the pests. No luck: it soon became apparent that they were also targeting bees and other pollinating insects .…

In the area of herbicides, after the chlorophenoxyacetic acid derivatives 2,4‑D and 2,4,5‑T , synthetic phytohormones infamous for their massive use as defoliants by the American army during the Vietnam war and for their contamination by dioxins, triazines have been widely used, especially for corn cultivation. These are atrazine, simazine and terbuthylazine. These highly persistent herbicides widely contaminate surface and groundwater. After simazine, atrazine, known since the 1990s as an endocrine disruptor, was finally banned in 2007 in the European Union. It should be noted that desethylatrazine, the main metabolite of atrazine, and atrazine are still detected in high concentrations in groundwater in Wallonia, due to their persistence and mobility in soils and aquifers.

Less often questioned because of their action on less familiar living beings, fungi and yeasts, fungicides have just been put under the spotlight by a group of French scientists and doctors. These scientists blame the new generation of fungicides, the SDHIs (or succinate dehydrogenase inhibitors). These are new representatives of this family known and used since the 1960s-1970s, and are more effective. Now used on a large scale, these SDHIs end up on our plates through food contamination and are thus likely to cause cellular disorders in humans.

Based on the inadequacy of toxicological tests prior to their marketing authorization, these scientists are calling for a suspension of the use of SDHI. This saga of pesticides, which spans 7 decades, is marked by a succession of techno-scientific innovations that have given rise to new families of pesticides each time presented as more effective and less problematic for the environment and human health. In each case, unfortunately, unanticipated destructive effects have been uncovered after the fact.

WHAT IS THE REALITY?

The evidence shows that the warlike vision of industrial agriculture that insect pests, weeds, molds and fungi that disrupt crops and reduce yields must be eliminated with an arsenal of chemicals designed for that purpose is not realistic. It causes irreversible ecological and sanitary damage. The collapse of biodiversity, which has been going on for many years, is now reaching a critical level, as denounced by many recent studies.

The damage to health, which has been widely documented for many years, is generally contested both by pesticide companies and by institutions in charge of public health, which are adamant about the need to demonstrate a conclusive cause-effect relationship. But the evidence is mounting, and 2018 has seen the certainties of the experts who supposedly guarantee the safety of pesticides on the market crumble.

There is, of course, the August 10, 2018 ruling by a California court ordering Monsanto to pay $289.2 million to an American gardener Dewayne « Lee » Johnson. A 46-year-old father of two, he has terminal cancer of the lymphatic system, which he attributes to exposure to the glyphosate-containing herbicides Ranger Pro and Roundup Pro marketed by Monsanto. This judgment is all the more important since Roundup is the most widely used herbicide to date. It also seriously questions the position of EFSA (the European body in charge of the pre-market assessment of a pesticide) which considers glyphosate as non-carcinogenic, in total contradiction with the IARC (International Agency for Research on Cancer) which classified glyphosate as « probable carcinogen » in March 2015.

Another blow, even more decisive because it definitely shakes the certainties of the supporters of a « reasoned » use of pesticides, is the publication of the journal Environmental Health Perspective on June 27, 2018. Researchers from INRA and INSEN, two institutions not suspected of militant environmentalism, have demonstrated the combined effects on rodents of a diet contaminated with a cocktail of 6 pesticides, at levels considered harmless:

This confirms the results of the study of a cohort of 69,000 people who follow their eating habits: the biggest consumers of organic food have a lower risk of suffering from overweight and obesity and of developing a metabolic syndrome (precursor of type 2 diabetes).

The presumption of a causal link between permanent exposure to pesticide residues in food and the risk of metabolic disorders is clearly strongly reinforced.

Today, it has become very clear that the policy of « sustainable » use of pesticides and the alleged reduction of their use is a total failure. Not only is there no reduction, but pesticide residues in the environment and food are still as present as 30 years ago. The most realistic conclusion to be drawn from these damning facts has been offered to Swiss citizens over the past year. A petition demanding a ban on all synthetic pesticides has gathered 100,000 signatures. According to the Swiss law, this result leads to the organization of a referendum which will decide in all legality.

This opens the way for all neighboring countries to ban the systematic poisoning of our living environment and our children in the name of an illusory competitiveness of agriculture.