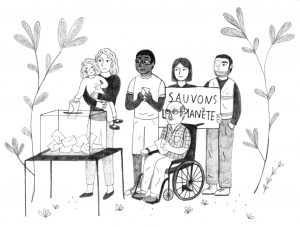 « In the spring, what were you dreaming about,
Old world closed like an orange,
Make something change,
And we met strangers
Laughing at the angels ».

Last year, many of us were eagerly anticipating the spring of ’68. All this, this expectation of « something » in memory of this legendary month of May, even if it was anything or almost anything, was basically quite childish, I am perfectly aware of it. But, as the popular wisdom says, « you can’t change your mind »; and there are dreams and hopes that are hard to erase. And sometimes, without warning, « something » happens that no one could have expected; like a comet coming from nowhere, illuminating the night and spreading a fresh and joyful light everywhere.

Thus of these tireless yellow vests, which since already long weeks, from Saturday to Saturday in all the cities, on the traffic circles of France and Navarre, on the front page of the gazettes, on the television sets and the social networks, occupy the front of a scene where was played, since so a long time, too a long time, a spectacle become by too much against all expectation, it happens that dreams take back body, that events appear, as if coming from nowhere Many are those who observe, analyze and deconstruct with the greatest seriousness a movement which has no equivalent except in the great revolution of 1789, the popular front or the months of May-June 1968. All of them also agree to denounce a large-scale repression which is not only due to the multiple exactions of the police forces, but also to the increasingly authoritarian character of a power which does not cease to promote laws and instructions which have for object the criminalization and the judicialization of any form of social protest. In some ways, it is even funny when we see that the simple fact of removing the portrait of the president from the walls of the town halls is punishable by absolutely disproportionate penalties, one would come to wish that the ridiculous would kill. But, certainly, the blows, the wounds, the threats of all kinds have little effect on the determination of the yellow vests who are imagining, during gatherings where the word is king, a host of actions in parallel to the street demonstrations that remain on the agenda, despite the intimidation of all kinds. There is no doubt — despite the fancy figures of the Ministry of the Interior — that the movement is far from running out of steam; the images coming from everywhere and visible on social networks are there to testify. But let’s wait for the rest. When you will have this chronicle in front of you, time will have passed, President Macron will have made great and, who knows, surprising declarations and promises, following the synthesis of the Great Debate, the European elections will be in sight with, perhaps, there too, surprises of size, which will reduce to nothing the innumerable polls which will have preceded, in short, we will have something to rejoice in; or not.

THEY TAKE US FOR FOOLS!

In the meantime, let’s get back to « home » and to our little business… We will have witnessed, with relief for many of us, the end of the infamous Michel-De Wever government and, concomitantly, the launch of the campaign for the next legislative and, incidentally, European elections, with its share of comicalities and outrages of all kinds. Where we see that these  » people  » literally take us for fools, even for idiots, but this is not new. Look at the Mouvement Réformateur, which is making a 180° turn — the more the merrier — from hyper-liberalism to the most unbridled leftism, as if by magic (the details can be seen on the Internet, while waiting for the leaflets, posters and other paper supports that will invade our mailboxes). It is to be hoped that the voters will not have forgotten the countless attacks on the most fragile, the sick and other welfare recipients and the unravelling of what was left of public services. But finally, according to them, it’s all over! Make room for social justice, increased aid to those who need it most, an end to all kinds of discrimination, a war on tax evasion by the evil rich, and so on — and forgive me if I add another layer, but it’s all really too funny! And I will be honest and not pass over in silence the no less funny campaign of the party with the rose in the fist-but-not-in-the-mouth, let’s remain courteous in spite of what differentiates us — so little — from these nasty liberals; we will return to the fundamentals and become again THE party of the workers and it is not these dangerous Marxist-Leninist-Mao-Spontex of the PTB which will take our place, it is not necessary to exaggerate. Although, there will surely be some surprises. For the rest, let’s not fail to point out to our readers the comfortable pantouflage to come of many elected representatives of the MR and the cdH, who will be immediately rehoused in such and such public structures.

In conclusion, congratulations and expression of my deepest contempt to these  » The « decision-makers  » who, recently and everywhere in the cities and villages of the Kingdom, along the railroads and highways, have undertaken with uncommon ardor, the cutting down of hundreds or even thousands of perfectly innocent trees. This, in the wake of the demonstrations of the young and not so young in favor of a Climate Law which, by the way, would have been only a possible and eventual runway for important projects and decisions of which we hardly see how our dear elected officials, always late for a war, could have measured the extent.

Come on! Go to the polling booths, make the best possible choices in your souls and consciences; we’ll talk about all this in the 40th issue of our dear and irreplaceable Kairos !