THE WORDS OF THE « PACT 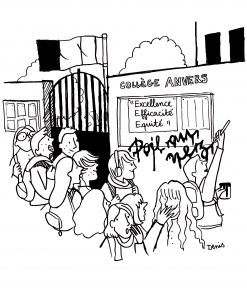 Unless you’ve spent your time watching lobster bands or listening to stories about pizza being delivered to a presidential house in France, the Pact for Excellent Education in the Walloon-Brussels Federation can’t have escaped your notice. Especially if, you lucky∙e∙s, you’re one of the privileged∙e∙s whose toddlers, entering kindergarten, will get to wipe the slate clean with their chubby little arms. You’re in luck! Let’s put our children to work to make them fit for jobs as soon as possible. The managerial revolution is underway.

All the newspapers talked about it. The media brought out their big artillery daily, on a music of John Barry tendency Jaws. But who is afraid of this wonderful pact? Who is questioning it? Who dares to criticize it, when this marvelous product of « negotiations », « meetings » and « opinions » is a reform whose unusual conception (2 years of concertation under the aegis of the minister Marie-Martine Schyns) has the affirmed vocation of putting an end to school pandemics: repetition, less and less differentiated teaching, inequality from one school to another…

The drama took place essentially behind the scenes of the parties (even if the « actors » of education were invited to give their opinion to make the « process » more « efficient » in order to increase the profitability of a system in which, great gods, there is no competition, no irruption of the « market », no « control », since the efficiency of the system is not to be questioned at all. Oh, really? To see more clearly, one may be tempted to visit the website dedicated to this major reform(1). Among other documents, reports, we are invited to read the text of the pact. We will learn more, throughout the 350 pages and counting that make up this masterpiece, about a process that will cover the re-entry for a decade, the time, no doubt, of « progressiveness ».

Wonderful site where, on the right of the most important information, appear — in a totally expected way — the keywords. Happiness on earth. Between the tabs on  » administrative assistance « ,  » consultation « ,  » repetition « ,  » art and culture « , the sacrosanct  » digital  » and  » consultation « , new words appear, including a group of three letters,  » DCO « . What is it? It is a Delegate to the Contract of Objectives. What does he (or she) have that you don’t? Of course, he (or she) is trained to tell you if you fit within the bounds of what is required in the Walloon-Brussels Federation to please the expectations of the Pact. In other words, no, you won’t get a slap on the wrist if you don’t make it, but you will be made to feel very strongly that you haven’t met your goals (bad guys that you are). All in a spirit of total collaboration, of course, since this contract will be in the form of a  » The « piloting plan  » has caused many overtime hours to the teaching teams (at the same time, everyone knows that they spend their lives squandering their sumptuous salaries on activities that serve no purpose).

Let us quote the words of one of the communicators of this site, Olivier Laruelle: « Ps a reminder, the draft decree on the new steering framework defines the objectives to be achieved by the school system as a whole, i.e. the « improvement objectives », as well as a framework for the elaboration of steering plans/objective contracts for each school. « (2)

The  » objectives  » (seen 316 times in the final opinion, preparatory to the Pact!) to  » In other words, the benefits or positive elements generated by the school system (42 times). (Note that this word appears 197 times in the final note, approved by the FWB government). The school system, i.e. all the  » actors  » (157 times in the Pact) of this  » process  » (98 times). Is that not clear? But it is written anyway, and the  » actors  » will bend to these objectives (or, more nicely said, they will have to  » objectify the needs  »), by beauty or by ugliness. With what tools? In the jargon used by the (courageous) writers, we note for example the overabundance of  » digital  » (84 times in the document). Wasn’t that enough for you? The explanation of these objectives to be achieved? Improvement goals. And in other words? The temptation then arises to consult the document to find the words  » improve  » or  » improvement  » which are found, in total, 49 times for the verb and 47 times for the noun. All this through devices (198 times), a term as interesting as it is imprecise.

Tomorrow will be better, we are told. The number of teachers will be increased (we know that the shortage of teachers is a chestnut in the media which insists 3 days later on this profession which attracts more and more young people, forgetting to specify that a significant part leaves the profession for other reasons than the economic value, the well-being for example, or the social recognition, while many persist in talking about « planqués »…). More consideration will be given to reasonable accommodations for all students with learning disabilities. The consultation between teachers will be strengthened. And many other beautiful things that promise a bright future (not forgetting that the  » budget « , a word cited 166 times in the final document of the Pact, is a parameter, let’s say, essential to take into account). Doing more, then, with more money? No, let’s get organized so that education improves by not spending more money (don’t scare right away,  » economy  » is only present 19 times). But damn, it’s sure! There must be more and better control over what we do with the money. Verification of the textbooks used, of the money spent on culture and travel, of the content of the courses, of the respect of the programs, … in short, the  » control  » appears 18 times and it is said that it must be reinforced. Stop the abuse! Money must be better spent. You didn’t think that you would be paid to do nothing, did you? However,  » confidence  » is still there, and appears 19 times. Phew. As long as some teachers practice their profession with passion and competence … The situation may not be over.

» This new governance is fully in line with the spirit of the Pact, which aims to move our education towards a more efficient and equitable school, together with all the stakeholders ‚ » adds Laruelle in the same article.

Oh, really? Let’s check the text of the final notice.  » Fair  » gloriously appears 3 times (two of which are in the findings at the beginning of the document) and  » effective  » 18 times, often with another beautiful word,  » manage . » Let us add that the noun  » efficiency  » (which must be measured, improved…) appears 36 times and the adverb  » efficiently  » only once in the (toxic) company of the word  » manage « .

Will the school become more efficient or more equitable? Will it achieve this  » excellence  » (which is called for 41 times in the final notice. The placebo effect, no doubt)? Will inequality be reduced? Will children, especially, keep their cool in this world of efficiency? Will the teachers and members of the educational teams manage to keep their identity, their strength, their passion for what remains the most beautiful profession in the world?

With such a productivist inventory, it is not absolutely sure. A positive bet is possible, if in practice this impersonal and overwhelming language is abandoned in favor of human, supportive, equitable, reasonable and, above all, fair practices.