THE VICTORY OF THE PIN-UPS 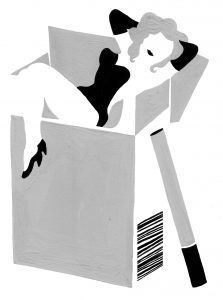 The term appeared in 1941 when American soldiers, waiting to go to the front, decorated their rooms with pictures of actresses or starlets rather pretty. But, the philosopher DanyRobert Dufour dates the spectacular appearance of pin-ups much earlier, in March 1929. In his book The Perverse City(1), Dufour describes the spectacular demonstration organized by Edward Bernays, who had announced to all the media an action in which « torches of freedom » would be waved. And in fact, on the day, a troop of pretty pin-up girls demonstrated, proudly displaying lit cigarettes. This very effective advertising action is the perfect symbol of the tactics of the first advertising theorist, Bernays(2). This nephew of Freud had well learned the lesson of his uncle who had affirmed that the hidden motive of most human actions is the sexual drive. Thus, in order to convince women to overcome the social stigma that a woman who smoked was depraved, Bernays made it the symbol of women’s liberation. By allowing them to steal the miniature phallic symbol of the cigarette from men, he made them believe that they were fighting for their liberation. In fact, they were preparing themselves for an addiction to a drug with very harmful effects for their health, but one has to sell, doesn’t one, even products that bring death. This reversal of values, vice turned into virtue, is the very basis of all liberal ideology and psychological manipulation, of which Edward Bernays, that malefactor of humanity who lived 103 years, is the incarnation.

Since those first pin-ups that languorously pumped their cigarette-phallus, the short-clothed young ladies have become the central accessory of many advertisements. It is generally believed that putting a nearly naked girl on the hood of a car is the model of sexist advertising aimed at guys. But, often, linking a product to a pretty woman in a pleasant environment is intended to make the female victims of the ad believe that by acquiring product X or Y, they will be attractive and desirable.

With time, sexist ads have become increasingly hard, with the soft porn that Dolce & Gabbana has become the specialist: borderline outdated … Let’s face it, there are sometimes sexist ads that can make you smile. For example, Candia’s Babette semi-thick cream says, « Babette, I mix it, I whip it, and sometimes it goes into the pan. Daring, but at least there is humor. Feminist movements still have a lot of work to do and an alliance with anti-advertising collectives would be useful because it is in this sector, which is essential to the obsession with growth, that we find the most manifestations of what makes Dany-Robert Dufour say, in his book The Perverse City, that we live in pornocracy. In 2009, he denounced the victory of the pin-up girls, regretting that the first lady of France was a starlet, a little too much a woman-object for his taste. One wonders what he thinks of the totally object woman who is the wife of Supermacho, the one who became president of the United States…