THE SEDUCTION OF EVIL 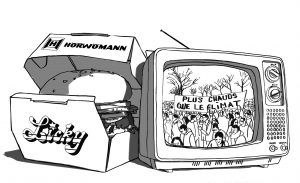 We thought they understood. The publicists were trying to make people believe that they had become decent and that they would no longer despise women and use the beauty of their bodies to sell anything and everything… Well no, in the middle of an awareness campaign against violence against women, some advertisers dare to represent a bastard who beats up a woman under the pretext that she didn’t bring him the hamburger of the desired brand.

The avalanche of indignant reactions required to denounce these fools of Ricky. But do you think that the media will finally denounce the cultural and sociological ravages of all the ads. Not at all! We will seek the opinion of  » advertising specialists « , i.e. players in the sector who will obviously defend the profession. So the debate becomes:  » Will Picky profit from his package or not? To appease the very angry feminists, they are led to believe that the evil Dutch company would not take it to heaven and that it will lose customers.  » Say good or bad, but talk about it  » (a recipe that also applies to politicians on the podium) would no longer work. But still, we advise not to talk about this filthy Sticky Burger anymore in order not to make… their advertisement: we are not at all close to a contradiction to defend « the advertisement soldier ». Finally, the most relevant comment was, for once, from a commenter on social networks:  » Your ad is as disgusting as your burgers look. Really big assholes to produce this kind of visual rag!  »

While it was a good opportunity to denounce the ravages of advertising, the majority of the media was content to stigmatize the macho excess of Licky’s ad and not the perverse logic of the whole advertising discourse.

SUBMISSION TO THE POWERS OF MONEY

One would think that journalists are getting fed up with advertising that directs what they can or cannot say and diverts huge amounts of airtime or paper space from the news. But no, the Stockholm syndrome seems to strike once again and the victims pact with their executioners. While the majority agreement of the Walloon-Brussels Federation plans to reduce (very, very little) advertising on the Rtbf, don’t some of the « in-house » journalists think that advertising is « creative » and that it doesn’t bother them. So, removing the unbearable ads that interrupt the news on Matin Première between 6:00 and 8:00 am does not bring joy to those who should be relieved to see the end of these ads that continually contradict the content of so many editorial pieces that suggest that the  » Theplanet is going bad  » because of the overconsumption of a large part of our contemporaries who have the chance to live in rich countries…

One searches in vain for what can motivate such a contradiction between the duty to inform and the reverence for advertising. Could it be because of the fear of seeing the Rtbf’s revenues decrease and therefore the fear of losing his privileged job. It is true that at a time when the public authorities are deprived of financial means (it is necessary to reduce the taxes of the multinationals and the rich who, according to the neo-liberal doxa, are the ones who make the economy work and increase the sacrosanct GDP), it is necessary to beg private firms for a few pennies in exchange for the invasion of advertising. And to think that these are the same people who boast about their independence… Radio, TV, written press: everywhere submission to the market which holds the strings of the only well-filled purses. And then we are surprised by the loss of credibility of these dominant media and the flight of citizens to social networks or the alternative press without advertising that you are reading right now.

THE PROMOTION OF ALL VICES

If Micky tries to make people laugh (unsuccessfully!) with violence against women, there are other ads that surf on other bad feelings. Many people found the advertising for Hörreurmann garage doors unworthy. There, it is the jealousy, the stupid and nasty envy of this couple of rancid bourgeois that one values to push to the sale of garage doors:

» Did you see darling that our neighbors have a new Hörreurmann garage door?  »

No problem darling, we’ll buy a bigger one too, and on top of that we’ll buy a new front door for our villa… What they will drool…  »

It looks like a caricature of what Richard Gregg denounced as early as 1936 in his prophetic book, The Value of Voluntary Simplicity(1). Gregg showed that consumerism works through what in the US is called the Keep up with the Jones syndrome. We buy useless objects, not because we need them but to compete with our neighbors (the Joneses) and show them that we are richer than they are. Conspicuous consumption, which was reserved for the leisure class in 1899(2), then spread to the American middle classes before infecting the whole world.

Certainly, there are ads more « to vomit » than others, but when we relay the calls to  » change your lifestyle « to How can we understand the complicit silence of the dominant media in the face of the surge of crime-promoting advertising and the « saving of the planet « , i.e. drastically reducing our consumption, starting with the most useless? greenwashing that only aims to incite us to buy more and more beyond our real needs?