THE RESISTANCE TO ADVERTISING IS GETTING ORGANIZED 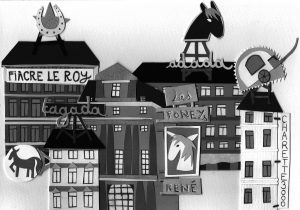 Despite the accumulating evidence of the devastating effects of overconsumption in our affluent societies, the majority of our contemporaries continue to gorge themselves without restraint. The balance sheets at the end of 2019 are frightening: record year of airplane flights (35 million in Belgium); maximum car sales (550,000, and mostly heavy SUVs). Those who try to postpone the catastrophe realize that behind these irrational behaviors is the harmful influence of advertising. They are therefore mobilizing to fight against its omnipresence.

January is the month of the car show and in early December Febiac (the Belgian automobile and cycle federation) launched its promotional campaign. A flood of pro-car ads saturate the media. But the resistance is getting organized and a coalition of associations and active citizen movements denounce this bludgeoning. Their goal? To make it clear that  » The objective of this promotional campaign is to generate the desire to buy one of the « flagship products » of the car manufacturers, i.e. those which ensure them the most comfortable profit margins. This desire to buy is deliberately fuelled by the symbolic added value attributed to the vehicles, and in particular to the most fashionable vehicles of the moment, the SUVs. They promote virility, power, freedom and protection against « external dangers ». « (1).

The collective has transmitted its demands to the « competent authorities »:  » At best, remove all advertising for cars; if progressiveness is necessary, ban all advertising for internal combustion engine vehicles emitting more than 95g/CO2/km and for any vehicle whose weight, power and speed are excessive and whose front end shape is dangerous to others. (…). The ultimate goal is that marketing standards be set for « unreasonable » vehicles so that they are no longer produced.  »

This action ridicules the advertising visuals of dream cars in dream settings, far from the sad reality of daily traffic jams. What is pleasing is that it is carried by a coalition uniting organizations from various sectors not used to act together: GRACQ (daily cyclists), Bruxsel’Air, Inter-Environnement Wallonie, BRAL, Fietsersbond, Extinction Rebellion, Welkom op de Kleine Ring, Réseau ADES, Critical Mass Brussels, Les Bloemekets, Inter-Environnement Bruxelles, UrbaGora, 1060/0, Pro Vélo, Tous À Pied, Mundo‑n… Would the anti-advertising fight be a motor of the convergence of the struggles?

The invasion of advertising which is intensifying today by the multiplication of street TVs and other screens pushes to consumption and made François Ruffin, French deputy and also editor-in-chief of our honored confrere, jump Fakir :  » In the « little corner » of this Parisian café, I was urinating when, surprise, amazement: at 20 centimeters from my eyes, above the vespasian, a screen imposes its certainties. « It’s impossible to miss your ad. And indeed: how to escape this message, bright, in color and in movement, which is displayed above each urinal, on each door of this basement? It’s hard to escape, unless you close your eyes and risk a liquid accident… As the ads for Uber, Bnp-Paribas, Fnac scrolled by, I thought: « Even here! » Even here, advertisers are invading our available brain time! They come to hunt us down in the toilets! Even this thousand-year-old contentment, and even more, which comes to us from the mists of time, even that, they will manage to dirty it!  »

And it is true that in recent years, in the streets and in all public places, advertising screens saturate the public space (first scrolling, then illuminated and finally digital). Outdoor advertising companies are lobbying hard to place them everywhere, sometimes even illegally.

BIG BROTHER IS WATCHING YOU

Some of these machines, which consume as much electricity as 2 households (7,000 kWh/year), even become spies: equipped with cameras, these screens scrutinize us in order to read on our faces our reactions to their advertisement: is the message received or not, on which « target »? This BigBrother will spy on you more and more: the Digital Out-Of-Home (DOOH), as advertisers call it, makes them salivate:  » It’s a revolution for advertisers to be able to program their campaigns themselves, in a centralized way, and to be able to associate data targeting with them ‚ » explains the general manager of a company specialized in branding and retargeting.

Francois Ruffin and nine other members of the France insoumise party have tabled an amendment in the French National Assembly to a law on the  » Prevention of risks related to noise and light pollution  » to ban screens in bathrooms and workplaces. It is not sure that the little soldiers of La République en marche will support this text which nevertheless protects our physical and mental health.

And we, simple citizens, what can we do against this invasion of our private lives? Should we encourage the most radical of the « ad-hiders » to start sabotaging intrusive devices?