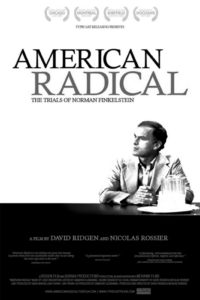 « To be radical is qualitatively more than the usual discontent that a person feels in contact with the world. I see this as something radically unfair so it needs to be radically changed. Other people think it’s wrong, but also that inequality is not radically wrong. Whose eyes do you choose to look through, whose eyes do you choose to look at the world through? It is a radically unfair world. And it requires a radical change ». Norman Finkelstein, an American Jew and specialist in the Israeli-Palestinian conflict, is not just a protestor. he is a man who commits his life to the demonstration of truth and the fight against injustice. but what his fight reveals, and that the reportage formidably highlights, is the question of identities, and the hatred that arises from the ignorance of others.

Norman Finkelstein criticizes the instrumentalization of history and the affected sentimentality that selects past sufferings in order to better evacuate present ones. Thus, responding after a debate to a person bursting into tears and reproaching him for not taking into account the suffering inflicted by the Nazis on the Jews, Finkelstein will answer, categorically: « I don’t like to play the Holocaust card in front of an audience, but now I feel obliged to do so: my late father was in Auschwitz, my late mother was in the Maijdenek concentration camp. Every member of my family on both sides was exterminated. My parents were part of the Warsaw Ghetto uprising. And it is precisely because of the lessons my parents taught me and my two brothers that I will not remain silent when Israel commits crimes against the Palestinians. And I consider that there is nothing more despicable than to use their suffering and their ordeal to try to justify the torture, the brutality, the demolition of houses that Israel is putting Palestinians through on a daily basis. So I refuse to be intimidated by tears. If there were any real feelings in you, you would be crying for the Palestinians ».

In this way, Norman Finkelstein profoundly questions identity and introduces the essential principle of going beyond it to « see through other eyes ». because of his Jewish origin, he creates uneasiness in « both camps ». Thus, he would only confess to a Palestinian friend a few years after their meeting — when she had learned to love Norman Finkelstein for what he was and not for what he represented his Jewish identity, in the form of a subtle and shocking question: « Do you like Jews »? « No, » she answered quite naturally. « Well, I’m Jewish, » Norman told him. « At that moment, » her friend explained later, « I realized that I had just talked to someone who I had admitted just before that I hated. However, Norman Finkelstein does not play on this identity in his defense against the injustices done to Palestinians: even though it is omnipresent and essential, he wants to be recognized for what he says and the truth he defends. paradoxically, because his own history is intimately linked to his struggle, he only confirms that the struggle for justice must be carried out independently of one’s identity: one should not denounce the bullying, destruction of houses, torture that the Palestinians undergo daily because one is an Arab, a Muslim, a Jew… but because these bullying, destruction and torture are in themselves unjust.

Norman Finkelstein, through his struggle, his determination, his disgust for injustice, pushes us to be radical ourselves. at the obvious risk of being prosecuted by those who are disturbed by the search for truth: Finkelstein will be expelled from his university and refused in others; in 2008, the Israeli government refuses him entry to the territory even though he is there to visit his Palestinian friend, and forbids him to enter Israel for 10 years, for « security reasons »; the Jewish defense organization has recently launched a campaign « Kick out the Jewish traitor » against Norman Finkelstein, putting up posters in his building and asking the landlord to evict him.

What Norman Finkelstein propagates is nothing less than the will to think freely, against the heralds of formatted and consensual thought, and to overcome the fear of expressing the politically incorrect. He lives his struggle and it is an exhilarating breath to see a man who is not afraid to say what he thinks… as long as it is for the betterment of mankind.