THE NEW GMO HAS ARRIVED 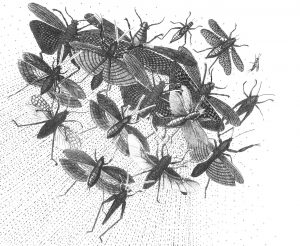 In 2015, a new technique for manipulating life was developed at Harvard University. This technique, which creates new DNA using particularly efficient molecular scissors (CRISPR-Cas9), cuts a DNA sequence deemed undesirable and replaces it with another to give the organism a property deemed beneficial. Unlike transgenesis and other GMO production techniques, the process is highly accurate, apparently easy to implement and inexpensive. It has also allowed the development of gene drive, a new manipulation with enormous potential for application.

Genetic forcing consists not only in introducing a new gene into a living organism (bacteria, plant, animal) but above all in guaranteeing its transmission to all its descendants. This is made possible by the fact that the genetic forcing destroys the competitors of the new gene. As a result, even if the genetically modified organism mates with a partner carrying a different version of the gene in question, all of its offspring will carry that gene and express the associated property.

I quote here the words of two French scientists who recently called for a public debate in their country. « In theory, if 10 individuals genetically modified by insertion of a gene drive DNA cassette are introduced into a natural population of 100,000 individuals, then on average more than 99% of them will carry the gene drive cassette after 12 to 15 generations. The gene drive manipulates to its advantage the three pillars of natural selection: mutation, heredity and adaptation.(1)

Humanity, or rather a part of its members, thus holds the power to transform the species according to its will and in fine to remake the whole living world and to domesticate it.

The most ambitious projects are mentioned and are already being studied in the laboratory: making locusts sterile and thus preventing them from devastating crops, making invasive plant species incapable of surviving in their new habitat or modifying the sex cells of mosquitoes to prevent them from carrying the parasite responsible for malaria.

However, the enthusiasm of genetics researchers for CRISPR-Cas9 and its performance in the laboratory should not lead to a hasty conclusion about the practical value of applying this technique in the field. An ecosystem is not an aseptic laboratory where all parameters are well known and controlled.

The case of malaria and its hypothetical eradication would require a thorough prior assessment of the ecological impacts of a sudden intervention on an insect population. As some scientists point out, the role of the mosquito in the food chain is still not well understood. The risk of depriving some predators that regulate the populations of other crop pests is real. We could therefore cause famines. Moreover, it is illusory to believe, as the entomologist Frédéric Simard, director of research at the Institut de recherche pour le développement (IRD), points out, that genetic control can be a panacea. « The mosquito populations that we’re going to attack in the wild are extremely variable at the genetic level, which gives them a fantastic potential for adaptation.(2) In fact, our knowledge of the real functioning of ecosystems is still largely insufficient to allow the release of genetically modified species into the wild that could cause irreparable and irreversible damage.

Even those who are seduced a priori by technological innovation and who have invested heavily in research on genetic forcing are cautious. Thus, DARPA (The Defense Advanced Research Projects Agency) and the Bill and Melinda Gates Foundation (again!) funded a study, published in June 2016, by the National Academy of Sciences(3) to assess the risks, investigate the state of knowledge and investigate the means for a « responsible use » (sic). We should therefore rejoice in the solicitude of these benefactors of humanity.

But as the ETC Group has pointed out with its usual pertinence(4), the NAS study, although interesting, ignores three fundamental aspects of the issue of genetic forcing:

Another aspect of the use of CRISPR-Cas9 that is of great concern is its application to human beings. Chinese researchers (Sun Yat-Sen University in Guangzhou) tested the technique on a human embryo and published their study on April 18, 2015 in the journal Protein and Cells. This publication, refused by the journals Nature and Science for ethical reasons, has agitated the scientific community.

Some warn against the risks of modifying an entire genetic line and thus the human race and call for a pause in research. Others, already engaged in the manipulation of the genome of certain animals, such as pigs or cattle, do not hesitate to predict a certain future for this technology in human medicine. For some, it could eliminate serious genetic diseases such as cystic fibrosis and even provide lifelong protection against infections or Alzheimer’s disease. But, it is hard not to see that the door is opening wide for eugenics.

Are CRISPR-Cas9 and genetic forcing not to biology what controlled nuclear fission is to physics: a technology of such power that it threatens humanity?