THE NATIONAL LOTTERY: A FORMIDABLE INSTRUMENT OF SOCIAL CONSERVATISM 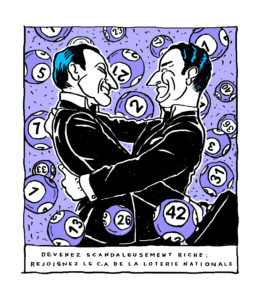 THE LOTTERY: A LONG PAST… FULL OF FUTURE?

Leaders, the magazine of the Cercle de Lorraine, devoted a dossier in 2013 to the National Lottery, « creator of opportunities loaded with history. » The Cercle de Lorraine knows what it is talking about, as it reserves its prestigious venue « for business leaders, professionals, diplomats and European civil servants as well as personalities from the academic and political world ». With a one-time entrance fee of 1,750 euros and an annual membership fee of 1,530 euros, you will need a few winning tickets to get through the doors and obtain the membership card, « the precious sesame that will give you access to the Circle »(1).

After more than 80 years of existence, the National Lottery is an established institution. Philippe-Edgar Detry, who is none other than the grand-nephew of the founder of the National Lottery and a member of the Cercle de Lorraine, is the manager of the patronage department, the first in the country in this field. It is that the Lottery, in addition to being of considerable ideological power, surrounds itself with an armor of symbolic protection without common measure that is the patronage. Because why attack the wealth if you distribute some of it? Why blame the members of the Lottery Board of Directors for winning obscene amounts of money, when they « Theymake dreams come true, support sportsmen and women, help cultural initiatives to develop and give young people a maximum of chances (…) Partly thanks to you, because every time you play, you help!

We do not bite the hand that feeds us. When we support financially the National Council for Animal Protection, small producers in southern countries, PAN Europe and its actions in favor of the use of alternative solutions to pesticides, Be Gold which helps young athletes, the Belgian Paralympic Committee which helps athletes with a physical, visual or mental disability, Veterinarians Without Borders in Rwanda, the non-profit organization Take Off which provides sick children with free computer facilities to enable them to attend classes, etc., when you are one of these structures that receives part of the 185,300,000 euros in subsidies, or the 14,500,000 euros in sponsorship, there is little chance that you will criticize the National Lottery(2)It is not a matter of a single person’s being able to afford to pay, but rather of being asked to eradicate it on the grounds that promoting wealth in a system that works to create misery is an anti-democratic indecency. There is thus a tacit agreement between the big established fortunes, most often family fortunes, the politicians, the players and the beneficiaries of the patronage. Attacking the country’s leading patron is not without the risk of a front of outraged reactions from various quarters.

Behind this tacit agreement is implicitly built the opinion that it is only a freedom of each one to become rich, that those who are already rich have worked for, create jobs, are indispensable to society. Of course, this is a vast joke and the socio-economic reality easily demonstrates it: the big fortunes are parasites of society, who distribute downstream what is not taken from them upstream, entrepreneurs strutting around in Viva For Life or multi-millionaire stars with bank accounts in a tax haven showing off at Restos du Coeur, attracting the glories of charity. Thus, no worries, while the members of the Lorraine circle create misery, their colleague Philippe-Edgar Detry works to create dreams. And they buy the silence of the politicians by paying them handsomely for useless positions in the Board of Directors of the National Lottery, from where they shower their colleagues in the Ministries who receive « an envelope with which they will play Saint Nicholas »(3).

THE HISTORY OF THE NATIONAL LOTTERY

Let’s go back a bit. We are in 1934, the finances are bad following the great recession of the 30s and René-François Detry, then chief of staff of the minister of the colonies, proposes to set up a lottery whose receipts will feed the colony. Battle broke out: posters, advertising films, illuminated signs, colonization of the press and radio, postcards, coasters… the success is there. Put on hold during the Second World War, the institution was revived and transformed into the Winter Relief Lottery whose objective was to help the post-war Belgian population. Taking back its original tasks, intended for the colony, it gradually turned to a patronage activity to help « Belgians in need ». In February 1953, following a deadly tidal wave, the Belgian Red Cross received half of the profits from a special draw.

With the « independence » of the Congo in 1960, from Colonial, the Lottery becomes National(4) and gains its success, its turnover growing every year and redistributing gains to various organizations, such as the King Baudouin Foundation, the Anti-Poison Center, Child Focus, the Mint, Bozar, Europalia… It also provides subsidies « through calls for projects aimed at sustainable development, the fight against poverty and the achievement of the Millennium Development Goals ». Finally, it also interferes in the communes and districts, helping financially to build playgrounds, to organize a village festival or a sports competition.

« Today, more than ever, the National Lottery is concerned about its image and is at the forefront of communication.(5)He has to make people accept this fabulous paradox of having the poorest people voluntarily finance the training of a few new rich people, and thus participate in a form of reverse taxation where many give for one. Endowed with an all-round notoriety, benefiting from an aura corresponding to the image it wants to give, the National Lottery has the means to buy the silence of the others, allowing this formidable trick of prestidigitation which consists in extinguishing the protest against the scandalous wealth by deluding subjects that they will be able to become it. Yet, given the odds of winning the jackpot, the National Lottery is mostly a creator of bad luck, which players and those who watch the « big winner » show evade simply because of a hope that ignores reality.

AUTOPSY OF THE NATIONAL LOTTERY: AT THE HEART OF THE PROPAGANDA AND LEGITIMIZATION ORGAN OF THE MONEY KING

The national lottery is a vast machine with a well-tuned gear. Governed by the law of April 19, 2002, it has a turnover of around 1 billion 200 million per year. Its Board of Directors (BoD), appointed by the King (i.e. the federal government), is composed of 14 members appointed for 6 years and renewable(6).

It is by diving into the mysteries of the National Lottery that the workings of a total system are revealed, which rewards its administrators, maintains the illusion of « what if it were you! » with omnipresent marketing , distributing subsidies and sponsoring, and ensures a lock on thought. It is then difficult to perceive the principle that smolders within it, namely the deeply indecent ideology of individual enrichment at the expense of others.

First of all, it is the managing director, who chairs the Management Committee, Jannie Haek, who breaks the record for apnea, receiving a cool 290,000 euros per year. Jannie Haek hasn’t been on Cumuleo’s radar(7) since 2005, but a little research goes a long way to understanding the character. The one whose mentor is Etienne Davignon(8), has been involved with several Socialist Party pundits (Louis Tobback, Luc Van de Bossche, Johan Vande Lanotte) and has been involved in various ministerial cabinets. The last mandates of 2005 show that he was at the same time remunerated for the functions of director of a strategic and general policy unit, managing director of ASTRID SA (Telecommunication) and managing director at SNCB. The individual, who has a degree in political science and lives in Bruges, started his political career as an inspector in the Ministry of Finance. Before ASTRID, he was President of BIAC (which manages Brussels airport). In 2013, he jumped from the position of Managing Director (CEO) of SNCB-Holding, which he had held since 2005, to that of Managing Director of the National Lottery… No unemployment for Haek. He is or has been a member of the board of directors of various organizations (NV LSO, BOIC, NVB, PMV, Executive Committee of the European Lottery)(9). On September 23, 2013, at the Guberna Members Forum hosted by the National Lottery, Jannie Haek titled her speech « Get Scandalously Rich, » to an audience most of whom are already rich.

THE MAFIA OF THE NATIONAL LOTTERY BOARD

The members of the National Lottery Board of Directors are, in 2017:

Clearly, the appointments are very political… because you don’t promote just anyone to the National Lottery Board’s « win for life ».

WHAT DOES A NATIONAL LOTTERY ADMINISTRATOR EARN?

In total, the political management of the lottery alone costs a little over 700,000€ per year, with the structure’s turnover being the most expensive. « The National Lottery spent €425,000 on its CA in 2014 (…) The cost of its CA exceeds even the median level of costs calculated by Guberna. »(16) That’s what it takes to be a « creator of hope »… for others. And it is known, hope makes you live!

Certainly, administrators must adopt in practice what they invite their players, less fortunate than themselves, to become: « outrageously rich! » Question of balance.