The lure of media diversity 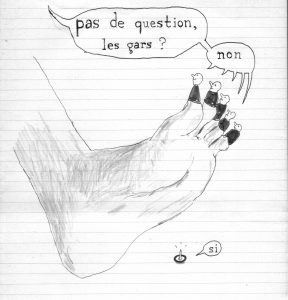 The various titles and channels alone would give proof of media diversity, without having to think further: « if there are many, it is because it is different ». CQFD ? For these same media, the answer is self-evident. But what about the politicians? Also. Analyze the presence
The various media « brands »(1) are owned by a small handful of media groups that all propagate the same ideology. Welcome to the reign of the single thought, which does not presage any « world after » if we do not put
democratic control of information.

Between March and June, the list given to us by the government in the context of our trial for obstruction of the freedom of the press (which has refused our presence for more than 7 months), shows that 16 « major media » are present at the press conferences following the National Security Council. These are La Libre, La DH, LN 24, Belga, VTM, RTBF, VRT, Le Soir,
Sudpresse, De Standaard, Knack, Het Nieuwsblad, RTL, L’Avenir, L’Echo, Kanaal Z/Canal Z.

By establishing ownership of these different media, diversity is already being eroded significantly, from 16 to 5:

RTL Belgium, owned by IPM, is at the heart of cross-shareholdings and is also indirectly linked to Rossel…, just as Belga is linked to IPM, a 16% shareholder in the agency, and to RTL, via Audiopresse. The Belga agency, which is present at every press conference following the NSC, is not a media outlet per se, but provides images and texts to other media, and counts among its clients the governments(8).

CROSS-HOLDINGS AND MULTIPLE SEATS ON BOARDS

The graphs alone show the cross-holdings of the different media, one of which owns the other via an intermediary structure which itself is owned by the different groups. The directors themselves sit on the boards of other related groups or organizations. In the Board of Directors of RTL, we find for example Bernard Marchant (CEO of Rossel) and Patrice Le Hodey (owner, together with the Le Hodey family, of the IPM group); in the Board of Directors of Belga, we find Philippe Delusinne (Managing Director of RTL), Bernard Marchant (Rossel), François Le Hodey (IPM); in the Mediahuis group, we find Thomas Leysen (IPM) as Chairman of the Board of Directors, Bruno de Cartier d’Yves (L’Avenir, RTL, Audiopresse). Etc.

There are three media outlets that do not belong to any press group(9).

- LN24, launched on September 2, 2019 at 8:00 pm live from the Brussels Capital Parliament. After barely a year of existence, the government already considers the channel to be  » a major player in the Belgian media landscape « . Perhaps because its co-founders, Joan Condijts and Martin Buxant, are well connected: the former is the former editor of L’Écho ; the second one went through La Libre, friend of the former editor-in-chief Francis Van de Woestyne, columnist at L’Écho, journalist for the morning show of Bel-RTL, in 2014 in a political program of RTL, journalist at the Morgen. Man has relationships.

The coronavirus will have allowed LN24 to considerably increase its audience(10), having been welcomed at all the press conferences following the NHA (unlike RTBF or VRT in particular). Not much information about the company LN24 on the CSA website(11). On Wikipedia, we find that the latter has as partners Belfius, Ice-Patrimonials (the investment company of Jean-Pierre Lutgen, the brother of the other, who owns Ice Watch), Besix and Giles Daoust (managing director of Daoust and Title Media) who together will put in €4.2 million in seed capital; the rest will be completed in equal parts by the three founders (the last of whom has since retired): Joan Condijts, Martin Buxant and Boris Portnoy(12).

- RTBF: we know the conflicts of interest that run through the public channel, whose Board of Directors is made up of representatives of the main political parties in the French-speaking world: MR, PS, Ecolo, cdH…, the PTB being an exception with its two members. The general administrator, Jean-Paul Philippot, has friends in high places and a long arm(13), he whose salary had been revealed, higher since 2014 than that set by the Wallonia-Brussels Federation. The « whistleblower » has since been dismissed, the decision having been noted by the CA(14). However, the file would be much heavier and the acts reproached to the boss numerous. Silence however since: the dismissal will sound like a warning for those who could in the future nourish such desires…

In addition, Régie des Médias Belges, the second largest advertising sales company in the south of the country, 99.98% owned by RTBF(15), markets the main advertising space for TV and radio channels and media-related websites. These include: La Une, La Trois, LN24, AB3, NRJ, Be Tv, RTBF Auvio, RTBF.be, La Première.be, Vivacité, Classic 21, Musiq 3, RTBF.be, Cinebel… This inevitably creates links with those who own them, I named the groups described above.

AND THE AJP IN ALL THIS?

The Association of Professional Journalists, which is supposed to defend journalists, what does it do, but more importantly, who does it represent? It is interesting to see the members of its Board of Directors: its President represents Belga, its Vice-President Le Soir, its secretary RTBF, the Treasurer L’Avenir, the others are from RTBF (3), L’Avenir (1), Belga (1), Persgroep (1) No Tele (1), BRF (1), RTC Télé Liège (1), RTL (1), or are independent (6)… but depend on the media mainstream for their remuneration.

Those who are supposed to represent and defend us are therefore mostly from the world of the dominant media, the very ones that the government press services call « the major media players in the Belgian landscape », some of whom label all dissident voices as « conspiracy theorists ».(16)… Doesn’t this qualifier of « great » simply serve to hide the process of co-optation that allows a media to become great, which once qualified as such will benefit from certain prerogatives that will not push it to bite the hand of the master. Once you enter the circle, you don’t spit in the soup and you don’t criticize the person who brought you in. In our societies, « mainstream media » means « media of power ».

The Mediahuis group (formerly Corelio)(De Standaard, Het Nieuwsblad, Nostalgie…) owns, together with other groups, a bit of Belga, a bit of RTL which, in a set-up worthy of the Bel20 or Cac40 companies, buys, acquires, takes over, in short: concentrates. Mediahuis Partner NV, owned by Thomas Leysen (Belgium’s 373rd richest man), owns 50.6% of Mediahuis; Concentra, which owns 32.7%, is part of the Mediahuis group.

This leaves IPM, which is wholly owned by the Le Hodey family (438th largest Belgian fortune).

It is therefore not surprising that this summer La Libre and Paris Match (IPM), as well as Le Soir (Rossel), praised the former Prime Minister(19). We sell policies like we sell a product.