THE HUNT FOR THE MAN* IS ON 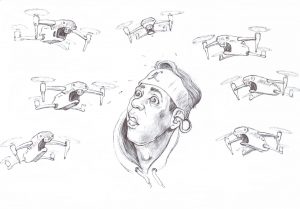 *Let the ladies be reassured: they are also targeted, but  » The manhunt » which inspired our title is also the one of about twenty movies, TV series, comics which all tell the story of the hunt for a human. Fortunately, the aim of the hunt is not to kill the runaway (although it is), but to prevent him from getting too close to his fellow creatures.

Faced with the need to contain the serious epidemic caused by Covid-19, it was necessary to devise devices to limit the contagion. Not surprisingly, the use of technology, especially digital technology, was among the weapons offered. Beyond the observation of the illusions of « artificial intelligence », this raises the serious question of the relationship between security and freedom. Indeed, one sometimes has the impression that it is not a virus that is being hunted down, but rather the humans who are carriers of it.

One could think that a new competition has started in the last 3 months: each country is ranked in a table that counts the number of infected people, the number of deaths and the evolution of the curve of cases (that must be flattened). Obviously, these good or bad results are attributed to the effectiveness of policies, and therefore of the leaders responsible for determining these policies, and more broadly, of the way societies are organized. These rankings are highly questionable, as they do not take into account genetic factors within populations, the sequence of the epidemic’s spread which allowed some (if they were lucid) to prepare, and most importantly, the honesty of the dissemination of the numbers. But the governments of each country do everything possible, and often with more than dubious technical means, to ensure that potential virus carriers keep a certain physical distance from their fellow human beings (called  » social distancing « , an imbecile translation of the English social distancing  » which should be translated as health removal « . But doesn’t implying that « social » is dangerous suit some people?).

THE TECHNOLOGICAL TOOLS OF TRACKING

In Europe, the containment of the entire population was necessary because, due to a lack of preparation, a lack of detection means (tests) and a lack of rapid reaction, it was not possible to isolate the first carriers of the virus. Containment varied in severity from country to country (and according to the spread of the disease), but almost everywhere the same technologies were used. The forces of law and order, often not very nuanced (euphemism), were then in charge of identifying and putting delinquents out of action. Let’s see what tools were used.

To spot the « runaways » who dared to walk in the parks, fields or on the beaches(1), they used the new technical jewel / toy of which all the big children that are military and police officers dream: the drone (from the English  » false drone  »). Not content with just spotting the « unwary », the drones were equipped with speakers that told the offenders to go home, disperse (or surrender?). Fortunately, they do not appear to have been equipped with the machine guns or rockets that enabled the American army to eliminate so many « dangerous terrorists » in Afghanistan or Iraq.

We are talking about the most authoritarian regimes, but the widespread use of millions of cameras monitoring all public places, coupled with facial recognition, makes it possible to punish anyone who commits a crime in the absence of law enforcement. Obviously, the gigantic database where everyone’s faces are recorded must be built for this to be effective. And, lo and behold, what was until recently an offence (walking around masked, especially for Muslim women) has become an obligation that renders the whole tracking system obsolete. But maybe they are developing recognition systems based on half a face…?

Intended until now for people placed under house arrest, one can imagine attaching this tracking device, which triggers an alarm at the nearest police station when the « prisoner » leaves home, firmly to the ankles of people obliged to remain strictly confined. When we know that this positive alternative to prison is very little developed because of the lack of means for the thousand of convicts who could benefit from this system, we wonder how to equip millions of people…

As you have seen, at the entrance of many public places, a gun is pointed at the forehead of those who want to enter to check that their body temperature does not exceed 37.5°C. At a distance, without contact, it seems ideal to locate the pestiferous (we find dozens between 30€ and 100€ on Amazon)(2)… This is to forget that half of Covid-19 patients are asymptomatic and that even those who have symptoms do not always have a fever. But this is reassuring and allows factories and offices to start working again,  » for the greater good of the economy « .

The alarm at the approach

The latest little gadget in fashion: since we can no longer be less than one meter (or 1.5m depending on the country) away and we are so distracted, a small box using Bluetooth technology (see box) starts to chirp if you cross this distance threshold from another human equipped with the same box. Used in factories or museums, this alarm does not yet go as far as distributing a small electric shock like the collars that are put on dogs that cannot leave their master’s garden.

THE MADNESS OF THE TECHNO-FURIOUS…

It was inevitable: faced with the need to track the chains of contamination to know who is likely to transmit the disease(3), digital technology merchants rushed to the more than juicy market. They therefore imagined equipping smartphones with applications that would track the movements of « hipsters » over a long period of time. If a person turns out to be a carrier of the virus, we would be able to trace his or her movements in the previous days and alert those who have passed by, if they too have this movement tracker.

Called tracking This method has logically aroused the indignation of all those who are attentive to human rights: this total and constant tracking of everyone’s life is the ideal tool of any totalitarian power, the algorithmic Big Brother that would make of each of us the chipped sheep that the totalitarian shepherd could bring back at any moment into the bleating flock(4).

All organizations concerned with privacy and human rights have vigorously opposed technologies that deny any possibility of keeping an intimate life that is not subject to control by the authorities. Even the most naive, who  » because they have nothing to hide », would be ready to accept a lot of loss of freedom for security reasons, trembled in front of this  » Eye of Sauron »(5) which would follow at every moment the most intimate life of each one.

Faced with this outcry, the public authorities backed down and did not go any further in their desire to develop the « This isthe technique, unfortunately already used in many undemocratic countries, of keeping track of people’s movements via the geolocation of their smartphones on the pretext of health security. And yet, different voices had been heard to defend this option and digital companies had offered their services to develop such applications totally indiscreet.

However, the high tech worshippers did not admit defeat. They fell back on the proposal to use Bluetooth (see box below, the origin of this term) so that everyone would know, at some point, if they had approached infected people, but that this would not be revealed to anyone at first. Thus, the person who has downloaded an appropriate application on his smartphone, thanks to the short distance communication allowed by Bluetooth, would have a list of all the other smartphones with the same application that have passed within a radius of 2 to 10 meters during the previous days and weeks. If any of these tested positive, all phones in the « log files » would receive a notification that would instruct their users to get tested quickly. For the supporters of this technique, it is  » elegant « , because it does not keep track of your movements: what is recorded (the log) is not the places you have been, but only which other user of the application you have approached (when two people are together for a while, their phones exchange anonymous data). Later, when someone learns that they have tested positive for Covid-19, their phone will be able to send notification of the potential danger to all the people they frequent and record in the log file.

This kind of digital tracking continues to be considered: in France, StopCovid is being studied by INRIA (National Institute for Research in Computer Science and Control) and half a dozen companies are collaborating in this project (Capgemini, Dassault Systèmes, Lunabee Studio, Orange, Nodle and Withings) as well as three government agencies (ANSSI, INSERM and Santé Publique France).

However, for this technique to be of any use, it requires prerequisites that cannot be met. At least 60% of the members of a company must use this « app ». But even in a disciplined, technology-savvy society like Singapore (which is often used as an example), only 20% of citizens have downloaded the process. So, in our country, with individualistic citizens, with a significant proportion of people who do not have and do not want a smartphone of the latest generation supporting this ultramodern technology (everyone should activate his Bluetooth permanently, which strongly solicits the battery and discharges in a short time all smartphones a little old). Excluded therefore are the old, the poor, those resistant to the obligation to follow the costly innovations that innovate to innovate. Moreover, Bluetooth also works through walls and you can be perfectly well confined to your home, locked in your apartment and be alerted because your next-door neighbor is Covid-positive even though you haven’t spoken to him in 2 months… and therefore asked to confine yourself or to go see an emergency doctor. Similarly, if you have brushed up against a future infected person in the street, you would be suspected of contamination when you have only glimpsed his back.

Since this seems impossible, we don’t tell you the anxiety and paranoia that this would generate. We would thus have the realization and the generalization of the horror that Norbert Ben Said feared, already 40 years ago in The Medical Light(6), when he predicted that the multiplication of self-monitoring and self-diagnosis technologies would create a society of mass hypochondriacs.

BACK TO THE HUMAN

Electronic tracking has been used in countries where it was implemented at the very beginning of the epidemic, when the number of infected people was small, the means were available to test them immediately and to quarantine them if they tested positive. But nothing like that in our country and epidemiologists are well aware that technology brings nothing, except a vain promise intended to reassure a population more and more angry about the unpreparedness, the multiple failures, the variable geometry lies, the cruel lack of drugs, masks, tests to detect the virus.

We get it, it will take humans to manage the deconfinement and prevent a rebound. Anguished technophiles will be able to play with their algorithms (artificial stupidity), but the saving acts will be done by humans. The monitoring of new outbreaks and the detection of contacts will be carried out by flesh and blood beings. They will speak, exchange, explain, and advise those who will be the next people affected by Covid-19. The only technology needed will be a telephone and, as we have been seeing for months in our hospitals, those who save are not computer programs, but men and especially women with hearts.