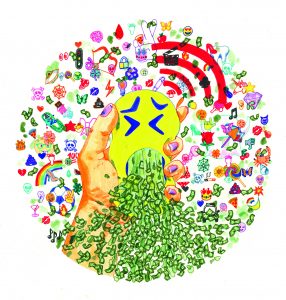 As we know, a growing part of the money that advertisers spend to convince us to buy more of their products goes to online advertising. Beyond the drying up of the media which made the mistake of looking for an important part of their means in advertising(Kairos n°46, p.19), it turns out that on the internet, thanks to more and more elaborate techniques, we no longer try to seduce, we manipulate.

Back in 2012, Facebook conducted a mind control experiment with 683,003 users of its social network. For a week, Facebook increased or decreased the number of positive or negative messages read by its members in their News Feed and analyzed the effect these changes had. Analysts have thus been able to verify that there is a form of contagion of emotions: seeing happy people makes us happy, even if we do not speak to them directly. Conversely, seeing angry people makes you angry. It is on the basis of such findings that the online manipulation strategy was developed.

It was in March 2018 that the general public realized that social networking was a source of effective mind manipulation. Christopher Wylie, a whistleblower, revealed that Cambridge Analytica, his former employer, had used Facebook to influence political campaigns in the United States and Britain. Cambridge Analytica, a company specialized in political marketing , had been hired to serve Donald Trump’s election campaign. Steve Bannon, a future Trump advisor, commissioned the company to illegally retrieve the Facebook data of 87 million U.S. citizens and then produce targeted messages on the Facebook network to inflame the racist climate and dissuade African-American voters from taking part in the election. And it worked…

Initially, Cambridge Analytica was studying the modus operandi of Islamic extremists who were recruiting, conducting propaganda campaigns and raising funds online. And then, one day, instead of fighting radicalization, analysts-programmers were asked to use the same knowledge and algorithms for the opposite purpose: to identify and radicalize young Americans, to stir up a racist and hateful mindset in them. Despite the scandal, many of the analysts worked for the Vote Leave organization that brought about the Brexit, continue to work on projects for the British Conservative government, or supported Trump’s recent presidential campaign (under the label of daughter companies, AggregateIQ or SCL Group).

They irritate many, these ads that pollute everything we try to see on the Internet. On the left, on the right, underneath, ads try to distract our attention from what we would like to read (this is called banners or display). Even more unpleasant, they even allow themselves to precede (pre-rolls) or interrupt the videos we are watching. This is, it seems, the price to pay for free internet. Free, but not for everyone… Obviously, advertisers have paid a lot of money to have the right to interfere with your interests, but this is far from being the source of income for the net giants.

Indeed, these highly visible advertisements are not the only means by which those who control the Internet can make money. There are also maps such as Google map on which you can see small signs that inform you about hotels, restaurants, shops and even private individuals who are a little narcissistic… All of them pay to appear… Finally, even less visible, the search engines. Each time you type one or a few words to find information, Google suggests sites in a specific order. This order is the result of keyword auctions. The highest bidder on a given keyword wins the auction and sees his link appear above all the other links that include this word(s). Sure, there are algorithms that know your preferences and take them into account a bit, but the results are geared to the amount of money the sites have paid. The competition is fierce… and expensive.

Google sets the tone in this digital jungle. Thanks to its Display & Video 360 (DV 360) tool, the multinational company allows advertisers to make bids to reach surfers with specific profiles and interests. Auctions are introduced in advertising exchanges that offer space on thousands of websites via automated electronic bids. Many bids go through Google’s ad exchange known as AdX, the largest in the world, with half of the market share. Similarly, publishers make advertising space available on their sites via exchanges, and this through ad servers, a category where Google has a market share of over 80%.

And it’s working like a charm: of the $162 billion in revenues Google recorded in 2019, the majority comes from online advertising, a market in which the firm is the dominant player. This niche called programmatic buying is expected to represent 88% of the online advertising market in 2021.

What we don’t realize is that, thanks to these sophisticated tools, the expenses that advertisers make around the world no longer go to local firms, but are automatically directed to American accounts, in Silicon Valley or rather in states like Delaware (where Biden was a senator for decades) which are very complacent from the point of view of taxation or the secrecy of financial exchanges. Just like e‑commerce, online advertising and programmatic buying are highly effective tools for draining local economies from the periphery and repatriating profits to the capitalist center. Or when Europe becomes the victim of digital neo-colonialism…

For years now, Facebook has been subjected to numerous criticisms: lack of protection of personal data that are sold to the highest bidder, growing hold of the and on the advertising market, discovery of practices that aim to stifle competitors to ensure a juicy monopoly … As a result, the company is under investigation in several states in the US and is in the sights of European authorities. The technology giant was recently sentenced by the

Federal Trade Commission to fine $5 billion for privacy violations. However, the wealthy Facebook octopus continues to expand and has acquired Instagram and Whatsapp, which is necessary given the number of people closing their accounts, as more and more people realize that  » if it’s free, you’re the product . » In addition, competitors are emerging, coming (oh horror) from China as Tiktok. In the USA, the hypothesis of dismantling the social network is regularly raised. Mark Zuckerberg, the CEO with the wax face (maybe it’s a 4th generation robot?) fights like a devil to defend his monopoly.

THE MANIPULATION IS DEMOCRATIZED

It has become obvious that social networks are a place dedicated to manipulation. So you can find for sale (online, of course) books such as I know who you are: the guide to spying on the Internet. We are not going to describe here these proposed rogue techniques(1)But the « teachers of online manipulation » say it clearly: they are inspired by advertisers who have understood that the web is the ideal place to manipulate with the sheep effect. Thus, they refer to ads that say  » and you, are you more or less stupid than other people in your area?  » It’s the  » If everyone else is doing it, you must be doing it too  » technique.

The naivety of our contemporaries seems to have no limits and the confinements or semi-confinements that await us will further increase the presence of online ads and other techniques that push to buy, not by need, but by imitation or will to distinguish oneself. Becoming aware of the mental and psychological manipulation techniques that are behind it is becoming more and more urgent.