THE DUBIOUS PRACTICES OF ECOLO SCHAERBEEK 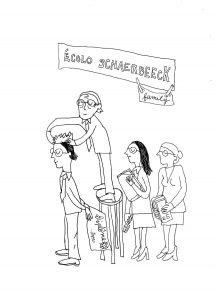 If Écolo has always placed ethics at the center of its program, at Écolo Schaerbeek, integrity and ethics do not seem to matter. However, even when informed of this local situation, the president of Écolo did not react. If the Écolo parliamentarians have done an exemplary job of parliamentary control in the Publifin, Kazakhgate and Samusocial cases, it seems that once they have come to power, the ethics of certain Écolos aldermen are waning. Here are some examples in Schaerbeek, where Écolo has been in power for almost 20 years.

Isabelle Durant’s successor in Schaerbeek, Vincent Van Halewyn, 1st alderman, has been dragging for 10 years a troubled affair of forgery of the diploma, with an unpaid debt of 35.000 € to the Brussels parliament. In order to receive a salary of 2,000 €/month as a parliamentary assistant, Mr. Van Halewyn had declared himself a university graduate, a diploma that he would in fact obtain only 2 years later. In total, he will unduly receive 35,000 € of public money from the parliament before the situation is discovered. Asked to produce his diploma, Van Halewyn had to resign and Isabelle Durant will put him back in his Schaerbeek fiefdom.

For the past 10 years, when asked by several people, Mr. Van Halewyn had always answered  » this problem [de 35.000 €] is solved « . Recently, when asked by us, two independent sources of the parliament denied this statement of the interested party: the first alderman Ecolo of Schaerbeek, has in fact never reimbursed to the Brussels parliament the 35,000 € unduly received, what he himself will recognize later on a famous social network. In terms of integrity, we have seen better it seems…

THE THREATS OF VAN HALEWYN

But we don’t stop there. When the Facebook page of transparencia.be revealed this non-reimbursement of 35.000 € for 10 years, the interested party justified himself by a  » The parliament never sent me a request for reimbursement « , which is correct. However, from an ethical point of view, it would seem that the least that could have been done would have been to spontaneously reimburse the public money that was improperly collected. Especially coming from the elected official of a party that in 2017 made the socialist mayor of Brussels Yvan Mayeur resign for undue remuneration of comparable magnitude. Écolo warned, the party nevertheless maintains its indelicate alderman. Where did the virtuous cries of the Ecolos elected officials for Yvan Mayeur (PS) to pay back, a year ago, go? Selective indignation? The initial article of  » La Dernière heure  » in 2006, already revealed the clientelistic practices of subsidies granted by the Écolos aldermen of Schaerbeek(1).

Later, Van Halewyn went even further, announcing that he was filing a complaint against Transparencia. Let’s bet that his lawyer’s bill will be less than the 35.000 € that he should pay back? After the false declaration of diploma, the intimidation. In terms of ethics, we have also seen better…

Can a public official hire his relatives as collaborators? In France, this is now prohibited since the François Fillon affair in 2017. In 2007, the former prime minister had his own wife hired in parliament for unverifiable benefits. This is the problem with family employment, as the controller of benefits is related to the controlled person, and it is difficult to imagine a politician firing his or her relative for insufficient benefits.

In Schaerbeek, Isabelle Durant’s « clan » was also known for its practice of hiring family collaborators, paid by the municipality’s money. When Isabelle Durant was head of the Ecolo group in Schaerbeek, and responsible for the appointment of green aldermen, one of her daughters, Marie Willame, had been hired in the cabinet of Schaerbeek alderman Christine Smeysters (Ecolo), during the 2006–2012 legislature. According to the newspaper La Capitale, Marie Willame, who had no professional experience, became a cabinet assistant without going through any call for applications. The 42% of young job seekers in Schaerbeek will appreciate having the impression that you have to be a member of a political party or a daughter of a good family to get a public job in Schaerbeek.

Ironically, her father, Jean-Claude Willame, Isabelle Durant’s husband, cried in the press at the time about the  » clientelism of the Socialist Party  » that threatened Schaerbeek in 2006, when at the same time, his daughter was entering professional life in the Ecolos cabinets set up by mom(2). Following this, twelve years later, Isabelle Durant’s husband still handles public insults as soon as someone dares to criticize Ecolo, as evidenced by his comments on facebook in October 2018.

At Écolo Schaerbeek, political dynasties also exist since Elise Willame, the other daughter of Isabelle Durant and Jean-Claude Willame, is now being considered for the position of Écolo alderman in Auderghem.

AFTER THE DAUGHTER, THE NIECE…

Ms. Decoux strongly denies any favoritism:  » Out of 180 applications received, Noémie Durant was simply the best . One may wonder why, given her exceptional qualities, she applies so close to her aunt Isabelle and not to other vacancies? Has the obligation to declare conflicts of interest referred to in the Royal Decree of June 14, 2007 for government employees been respected?

Once in power, do we suddenly become blind? November 2018, despite this liability, Écolo Schaerbeek is preparing to reallocate mandates to the old guard of Isabelle Durant, The co-president of Écolo, warned of these facts still mure in his silence. Bringing a new generation of Ecolos to power does not seem to be the priority in the city of donkeys (nickname of Schaerbeek(3)).