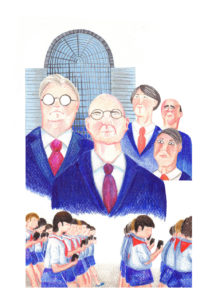 If a historian of the future were to look at the books that most profoundly influenced the late twentiethe and the beginning of the XXIe century, perhaps he would choose The End of History or the Last Man by Francis Fukuyama (1992) and The Clash of Civilizations by Samuel Huntington (1996). More than a quarter of a century after their respective publications, these two emblematic essays of the pivotal period from the end of the Soviet Union to September 11, 2001, and beyond, have enduringly polarized the debate and continue to generate passionate commentary and controversy.

It is probably no coincidence that in a chapter of his latest book, Autodafés(1), Michel Onfray draws a parallel between these two books and compares, in a sort of retrospective match, both their intrinsic contents and their predictive potential. A parallel rereading of these two books, which, ironically enough, are by a Harvard professor (Huntington) and his former student (Fukuyama), is indeed enlightening. From a philosophical point of view, Fukuyama and his work are part of the Hegelian tradition, that of German idealism, which also influenced, probably more than they wanted to admit, thinkers like Marx and Engels. Fukuyama thus takes up the thesis of the end of history(2) to apply it to current events.

To put it simply, the end of the Soviet empire would be the announcement of an « end of history », in the sense that a rational Weltgeist (the Hegelian « spirit of the world ») would impose without too much difficulty the triumph, at least ideologically, of (neo)liberal democracy on the whole planet. In Fukuyama’s sense, the « end of history » does not necessarily mean the end of conflict, but rather the idea that democracy (or rather a particular form of democracy, associated with the neoliberal free market economic regime) would become the unassailable horizon of a unipolar world. Clear echoes of this thesis can be seen in the famous « Washington Consensus ».(3)as well as in the « TINA » ideology(4) which forms its matrix: there would be no alternative to the indefinite expansion of a free-trade world market, supposedly self-regulating, bringing prosperity and resolving all conflicts.

THE BREVIARY OF THE CHAMPIONS OF HAPPY GLOBALIZATION

Quite quickly, Fukuyama’s book became the breviary of the preachers of « happy » globalization and of the thurifers of an unabashedly Reagan-Thatcherite neoliberalism. A few years later, in 1996, a Harvard professor published the Clash of Civilizations, which challenged this fine « finito-globalist » edifice with an ultra-liberal twist. Could Huntington’s diabolus ex machina (in the eyes of the proponents of the consensus and the end of history) not remain in the hangers? From the outset, the Harvard professor and former adviser to President Jimmy Carter challenges this idea of a happy globalization, which would signal the emergence of a global civilization and a unipolar world. If we look closely, is this idea of a single civilization not the wishful thinking of a small elite, politically and economically powerful, but numerically very small, and sharing what Huntington calls the « Davos culture »? Every year, this city in Graubünden hosts the World Economic Forum, which brings together business leaders, bankers, senior civil servants and leading politicians. From a purely numerical point of view, this globalized world elite does not represent much. Even if we include those who share their options to a greater or lesser extent, we would arrive, according to

Huntington’s estimate, at about 1% of the world’s population. However, this 1% has a power of influence that goes far beyond this numerical modesty and can count on allies that are sometimes unexpected to criticize this Huntington’s impediment to globalization.

For, once again, one is tempted to say, the representatives of a certain so-called « progressive » left will not be long in joining the critical chorus of Davos devotees, miffed to see their mantra of a triumphant and happy globalization belied. What do they blame on the Clash of Civilizations ? First of all, for being too « simplistic ». This is the case, for example, of Edward Said, who, in Le Monde, criticizes Huntington for establishing a false opposition between East and West, which, according to him, are  » labels that prevent us from seeing the diversity of the world(5) . In fact, far from limiting himself to describing a Manichean confrontation, Huntington defines in his book no less than eight civilizational areas, interacting with each other. The same Said also criticizes him for presenting civilizations as entities hermetically sealed on themselves, frozen, and neglecting the exchanges and crossbreeding that characterize them. However, one only has to read Huntington to see that he says exactly the opposite:  » Civilizations have no clear boundaries, no clear beginning or end. One can always redefine one’s identity, so that the composition and forms of civilizations change over time. Cultures interact and overlap(6)(7) « .

In an interview given to L’Express in 2008, the writer Jean-Marie Le Clézio, who has been known to be more inspired, adds a layer. In it, he said:  » I hate Samuel Huntington and his theory of the clash of civilizations . Why? Because  » the cultures are all mixed, including the western one, made of many elements coming from Africa, Asia. You can’t stop miscegenation(8) « . As we have seen, the Harvard professor says nothing that contradicts these assertions. One would think that these prominent critics have read a book…that Huntington did not write.

However, if the success and interest of a book are measured by its predictive accuracy, it seems undeniable that the master is beating his former student Fukuyama to the punch. Among other examples, Huntington’s analysis of China as a civilizational pole (re)emerging and successfully competing with the Western pole seems almost premonitory:  » The victory of the West in the Cold War did not produce its triumph, but its exhaustion… Economic power is rapidly shifting to the Far East, which is beginning to acquire more political influence and military power(9) « . And the Chinese government’s current ambitions with respect to Hong Kong, Singapore and, even more so, Taiwan are already reflected in Huntington’s words that  » The (Chinese) government considers mainland China to be the core of Chinese civilization to which all other Chinese communities should turn… It seeks to position itself as the world’s representative of sinfulness. For the Chinese government, people of Chinese descent, even if they are citizens of another country, are members of the Chinese community and therefore subject to some degree of Chinese government authority(10) « .

If we reread it today with more serenity, in a context where the fierce polemics have calmed down (although…), we discover a work that is quite different from the sulphurous and simplistic firebrand that some

have enjoyed caricaturing. A former advisor to President Carter, Samuel Huntington’s thinking is geopolitical and pragmatic. Twenty-five years ahead of his time, he describes a complex multipolar world in which ancient and emerging civilizational blocs are asserting their desire to play a major role, and in which the West’s claim to universalism is increasingly being called into question. And this world, where history is far from being closed, is ours.