THE ART OF MANIPULATION 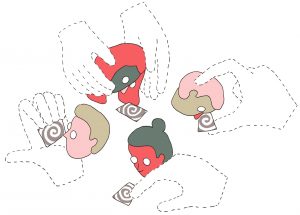 We saw in the « Advertising Threads » section of the previous issue of Kairos (No. 40) that more and more of the advertising industry’s financial resources are going to the Internet. Persuasion techniques on this interactive medium are obviously very different from other types of advertising. James Williams and Tristan Harris, who have worked in the advertising industry, especially at Google, are well informed and show how we are manipulated. They have created a site called Time well spent («  Stop wasting time « (1)) that tries to reconcile humanity and information technologies… Wouldn’t it be an impossible mission when we discover, in their manifesto that has gone viral(2) that the giants of the net,  » hijack people’s minds like magicians do « .

Indeed, just like magicians, Internet advertisers look for blind spots, vulnerabilities and limits of people’s perception, in order to influence them without them even realizing it. They play on the psychological weaknesses (conscious and unconscious) of Internet surfers to capture and divert their attention.

THE LIE OF « FREEDOM

The users of the network go there with a certain intention, to get information about this or that, and the art consists in making them quickly lose sight of this objective and attract them where the hidden manipulator wants them to go. James Williams says, « At the individual level, it manifests itself as distraction, addiction for some, confusion, a sense of scattering… And at the societal level, it also manifests itself as impulsivity, which takes the form of some violence.  »

Thus, while Western culture dominated by neoliberalism claims to be based on ideals of individual choice and freedom, it is quite different. Tristan Haris’ site makes it clear:  » Millions of us fiercely defend our right to make ‘free’ choices, while we ignore how those choices are manipulated upstream by menus we didn’t choose in the first place . » Indeed, one of the 10 ways to manipulate minds is to not offer all possible choices and to limit the menu to what « they » have decided to lead you to. Analysts of the art of manipulation have an amusing formula to describe this capture and diversion of attention:  » Here is the sad truth: several billion people have a slot machine in their pocket « .

Much of the thinking of those trying to bring ethics into the digital(3) focuses on compulsive and addictive behaviors towards the digital and the use of smartphones in particular. But isn’t that mission impossible when you realize that the average French person consults his or her smartphone 26.6 times a day, and that this number rises to over 50 times among 18–24 year olds? It’s a good thing that we, as resisters, are bringing this average down.

James Williams is not very optimistic:  » Do we still define what we want to pay attention to? Or do these technologies decide for us? For me, this is a political issue of primary importance. (…) We have arrived at an industry of large-scale persuasion, which defines the behavior of billions of people every day, and only a few people have their hands on the levers. That is why I see this as a great moral issue, perhaps the greatest of our time.  »

One can only share this concern when one realizes that persuasive technologies are taught in places such as the Stanford Persuasive Lab where, as their web link(4) clearly indicates, captology, the intersection of mind control and digital technology, is taught. Welcome to the world of the willing harpooned.

Awareness of the damage caused by productivism has accelerated in recent times. The mainstream media is very fond of images of plastic waste floating on rivers and oceans and pictures of the stomachs of marine animals that have died of a plastic overdose. The producers of these plastics feel logically targeted and one of the biggest polluters, Coca-Cola, has launched a rather obscene greenwashing campaign.

The slogan:  » Don’t buy Coca-Cola if you don’t help us recycle « . Reversing the blame: the multinational that produces 4,000 bottles every second tries to make consumers responsible for the catastrophe of the 6th continent of plastics and pushes the provocation to the point of pretending to refuse customers who, oh shame, would throw away the empty bottle.

Blatant untruths (Coke’s PET bottles are said to contain up to 26% recycled plastic, while their CEO admits in an interview with Elise Lucet of Cash Investigation that they are only at 7%), untenable promises («  Our goal for 2025 is to recycle one package for every beverage sold. (…) « By 2025, we want our bottles to be made of at least 50% recycled plastic  »)… But if the firm is so bad at recycling, it’s our fault as consumers, of course:  » We receive too few empty bottles in return. This packaging ends up in the wrong garbage can or worse, in the street or in the sea. It’s time to step it up: help us recycle!  »

Coca-Cola does not hesitate to lie to continue to sell its disposable bottles. Worse, each time the public authorities try to reduce the use of single-use packaging (eco-taxes wanted by Ecolo in the 90s, deposit on liquid food packaging in preparation in France, in the Brussels Region…), we find the polluters’ lobby with Coca-Cola at the head of the resistance.

The consumer associations fulminate:  » Coca takes us for fools … !  »  » The hypocritical greenwashing of the brand … ». But nothing stops the multinational’s double talk, it pretends to promote the circular economy, gives kind advice to drinkers of the brownish liquid («  Don’t throw your bottle away »,  » Did you know that it’s better to drink the whole bottle and/or can of Coca-Cola before throwing it away?  »)

Never stingy with provocative recups, the multinational even goes so far as to recover (sic) Michelangelo and his painting The Creation of Adam.