Smog alerts » are not alerts 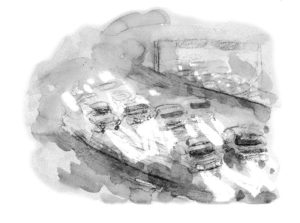 » Today, the presence of a thermal inversion will prevent pollutants from rising above 200–300 m altitude. The wind will be significantly more present than yesterday (around 3 m/s) but its action will remain too limited to disperse the pollutants properly. PM10 levels will therefore remain above 70 µg/m3 in the north of the Sambre et Meuse corridor « .(…)

« The weather conditions forecast for tomorrow, Thursday, and the day after tomorrow, Friday, will remain generally unfavorable to the dispersion of pollutants and do not suggest any tangible improvement in air quality. This situation is explained by the presence of a subsidence thermal inversion (around 300 m altitude) and a weak to moderate wind which contribute to limit the dispersion « (…)

» The SMOG alert went into effect at 6:00 a.m. this morning due to peak pollution. The speed limit is 50 km/h everywhere in Brussels and 90 km/h on the freeways above the Walloon ridge (thus north of the E42, included). Speed controls are reinforced.  »

Are we really in the presence of a « sudden threat », of something that « suddenly happens ». Have we « suddenly » been bombarded with 5.4 million cars in Belgium? Had this been the case, let’s imagine, having lived yesterday in a world where pedestrians, bicycles and public transport occupied the majority of public space, that the alert would have really been given and would have had all its meaning. Imagine: overnight 5.4 million cars, that our utopian attempts to redesign the city are reversed; that we live in a society where pedestrians, cyclists and public transport are the norm, and that, suddenly, this landscape is transformed into what our cities are now? How would we react? How absurd would it be to trade our freedom to move around without resorting to a market energy — oil — living in close proximity to others, in convivial spaces where the air would be clean and where the services essential to our everyday life would be gathered?

But it is that the change was made little by little and that we accept at its rhythm the modifications which it induces. We don’t suddenly go from a city where pedestrians, caravans, horses, bicycles and public transport dominate to a city crossed by highways, rings, viaducts, tunnels, parking lots… Gradually, each of these modes diminishes or disappears to leave room for only one. Progressively, we accept it, the contestations of yesteryear are melted in the history, the past being named to better glorify the present. Gradually, we can’t imagine living any other way. The metaphor of the cooked frog is a perfect illustration of what has been happening in our societies and shows how progressive and continuous changes elicit few defensive reactions from us(1). Let’s imagine a pot of water in which a frog is wading quietly. A gentle fire is lit under the pot, which gently heats the water. At first, the warm water gives the frog a pleasant feeling. She continues to swim, but the temperature continues to rise and the water becomes hot, a little too hot for the frog but she does not panic; she tells herself that it will pass eventually. When the temperature of the water becomes really unpleasant for the frog, it is then weakened, so it endures and does nothing. It is obvious what will happen next: the water temperature will rise, until the frog will cook and die, without ever having left its bathing place. If this same frog had been directly immersed in water at 50°, it would have reacted by giving a kick that would have saved it by expelling it immediately from the pot.

We are that frog. Most of us no longer perceive the negative potential of the changes that have affected our societies. Gradually, we accepted them. Worse! We even often gave them positive attributes. There is therefore little reaction, opposition or revolt. Let’s imagine that we take a subject 40 years ago and plunge it overnight into our time. What would he think of this society: of the omnipresence of advertising, of The Voice Belgium, of « social networks », of mobile phones, of the political show… All-car?

To evoke the « smog alert », in a society where the car show attracts in 2013, a record year, 385,000 visitors, where advertising for cars assails us daily on the radio, television, in the street, has something indecent, and profoundly misleading. « Smog Alert »? While the number of departures in civil aviation is expected to double by 2030, from 31 million to 59 million — average annual growth rate of + 3.6% — (International Civil Aviation Organization, www.icao.int.), the number of passengers carried will increase from 2.9 billion to 6.3 billion — average annual growth rate of + 4.5%. « Alert »? While the Flemish government persists in its project to enlarge the Brussels ring, defeating any ecological vision and social, and therefore any long-term perspective(2).

This anglicized wording shows us to what extent these media and governmental messages are a symbol of the decadence of our entertainment societies. Smog stimulates representations other than those of « air pollution », and evokes something climatic rather than an effect due to human activity; « smog » confuses our minds. But by this formulation worthy of a horror movie, the approach to the problem of air pollution and the measures it should imply, are absolutely denied… and relegated to the next alert.

Danger is not something that comes out of nowhere and manifests itself on « peak » days. The danger is daily: it is that of our way of life, of what we have become as human beings, whose capacity to think and imagine other possibilities is eroding a little more each day.