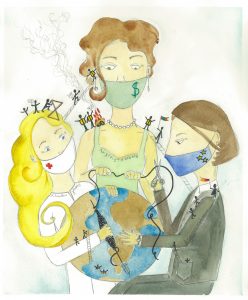 Caramba! The next world has not yet arrived. Start-up nationsWhatever it takes (cuckoo Manu) and hoping for better days (who must have tried to take a plane when an old volcano was awakening), the money is getting longer, the financial chasms are getting bigger, the capitalist states are emptying their pockets and it is in front of the eyes of millions, billions of people, that the pockets are being created

While waiting for the imprecations, the multiplication of mantras and the repeated calls to fear, resilience, yaka and faukon (unlike the real ones, who still govern) and vigilance are bearing fruit (my little finger tells me that it is not necessarily won), multiple movements are born, here and there, claiming many different motives and taking on four emblematic names (at least) but not at all synonymous. What if we took a step back and looked at them through the lens of semantic exploration?

Revolution, revolt, rebellion, slingshot: since the Yellow Vests crisis, we hear more of this little background music, which rumbles from time to time but — believe the forces of order and the authorities — shrivels up the camembert box just as regularly. Let’s add to this the civic disobedience that Kairos also reported on, very recently. We will have a very large panel that is not as homogeneous as we think. If the terms are quite similar in terms of their origins, it is not at all the same in their meaning and use. We will not see a President use the term « revolt » when he is familiar with revolution(1). Both words come from the same Latin root, which means « to return ».

The revolt, dear to Camus who devoted to it — at least — an enlightening essay(2) but also remarkable plays, of which Les Justes, does not have the same perspective as the revolution. This one is an emotion or a feeling, that one is a process, an action; on my left, they want to overthrow a system, on my right, they want to perpetuate a regime but adapt it; on the Camus side, they turn the table over with everything on it, even the best dishes, to replace them with other dishes, quite different; on the Macron side, they just want to dust the table and replace (dearly) the worn-out cutlery and the chipped plates. Real revolutions never really happened, even if the objective of these phenomena was to overthrow a system that did not work (or to the detriment of the weakest, the most fragile, the most neglected). Let us add that, for Camus, the objective is to overthrow something which is similar to religion, to God, to this all-powerful authority seen as an instrument of oppression. God, today, has been replaced, in a way, by the goddesses science, economy and politics. It cannot be said that this was done for the benefit of the population. We talked about the French Revolution (which put down Louis XVI but gave Napoleon I), the Belgian Revolution (we put down a Dutch king to put a Prussian king in his place), the May ’68 Revolution (which put down the patriarchal system in the style of de Gaulle but put the presidents of the Fifth Republic on a pedestal), the October Revolution (out with the czars! Welcome to Stalin, Lenin, Putin! ), the Cultural Revolution (Mao before, Mao after, what else ?) … And what can we say about the digital, technical, industrial and computer revolutions, which have never really improved living or working conditions and have rather accentuated the exploitation of some by others?

We will have evoked the Arab revolts (the people who fight to be taken by the Islamists, by the extremists, by the nationalists) and the Bounty revolts (is it necessary to specify that they ended up in a cool jail?)…

The picture looks pretty grim. Let’s try to find some comfort and reasons to be in hope with the slingshot and the rebellion…

So, what is it about? On closer inspection, the sling is only a tool for pressure by members of the same social group on the representatives of the said group. It’s a bit like following the spirit of revolt born in a strong head… The Fronde of the 17th century has nothing to envy to that of the 21st century, which sees the different political bodies oppose (often by sulkiness and egoism of a level of power not consulted, not for the improvement of the living conditions or survival of the fellow citizens) to the maneuver of a central power. Dare I add that this is often the case with French representatives? The slingshot is almost invisible in Belgium. Or it is limited to inflating biceps, then bursting the bubble thanks to the much claimed « Belgian compromise ». Slingshot, front, but above all… do not change the system, even if it means driving everyone into the wall!

As for rebellion, put forward by the group Extinction Rebellion, with spectacular actions on a myriad of issues of concern, it outweighs the others: excuse me, it is the subject of a paragraph in the penal code! This is a legal term whose origin refers to… war. A rebel is a person who wages war against an element, a person, a group of people. When that group of people is called a group of police officers, rebellion results in a one-way ticket to a cell (with built-in slaps, if you’re really bad). When this group of people is called a group of parliamentarians, it is called a potentially lost opportunity, since we are in a democracy(3). One will of course have understood the notion of the social classes present here: if the sling is done within the same social group, a rebellion is an action of resistance of a person belonging to a social class towards another. If the resistant person has the means to enter into rebellion, this is called disobedience. If the resistant person does not have the means, this is called an article in the  » Dernière Heure » and the « Une » on RTL-TVI.

From these two oppositions of resistance, an observation is obvious: we are not out of the woods. From an anti-productivist point of view, one cannot decently opt for either of these perspectives. The revolution will turn to resume the same system, but differently. The revolt, if it is not maintained by a common enemy to be put down, leads to extremes. The slingshot only feeds the social groups that make it. If these social groups are not powerful or recognized, they will have nothing. Since rebellion is warfare, it is not certain that a victory won will be followed by a defeat. As much to say that no system can spring from these movements, alas, if not an unleashing of violence in all directions.

If, at this point in reading this somewhat discouraging array, you haven’t yet opened the bottle of whiskey to drink it down, here’s something to keep your faith in the future: civic disobedience. On the condition that we commit ourselves together, in this refusal to follow without much thought the rules laid down, the imposed norms, the forced closures, disobedience will have an impact if this disobedience is at the same time subtle enough, sufficiently widespread and truly lasting. For this civic disobedience to have weight, moreover, counting on enlightened and bridge-building minds will be particularly strong. This includes building bridges between all parts of society, without seeking the interest of any one portion of that society.

Everything has to be invented. Or, if you think about it, everything is cumulative.

Wouldn’t these seemingly mutually exclusive notions make sense if they interacted and complemented each other?