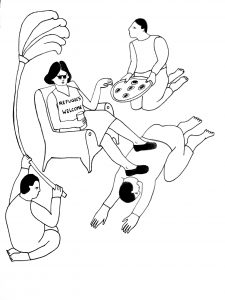 Having actively accompanied the war rhetoric, or having passively done nothing to counter the misinformation that feeds it (which is, like it or not, a form of warfare as well), they will now be able to reap the praise that the saviors usually receive(1): « Refugees Welcome ». The bourgeoisie of the left, the one of the post-Charlie demonstration of January 11 in Paris(2), as well as the one of the European capitals brandishing their welcoming signs, most often does not try to eradicate the real structures at the origin of massive emigrations from the dominated countries.

In the same way that one could not consider as reasonable the fact that all the Malians welcome the Belgians, once the Tihange power station has exploded, if they invested in the same time in our nuclear power stations, one cannot, without making genuflections which require a particular intellectual flexibility, be satisfied with the blissful welcome of the refugees of the countries which one destroys. Thus, « The solution is not to « tear down the walls and let everyone in », as the nice liberal « leftists » chant in their simplistic idealism. No, the viable solution would be to tear down the real wall: not the one erected by the immigration services, but the socio-economic wall. In other words, to change society so that people are no longer desperate to flee their homes.(3). But this probably requires a little more effort than chanting « all welcome », especially when you belong to a middle class that will not suffer from the massive arrival of refugees, but will rather benefit from it. Thus, « A poll published on September 2, 2015 showed that the poorer and younger people are, the more reluctant they are to the arrival of refugees, while the richer and older they are, the more favorable they are (Elabe poll for BFMTV). « Poor bastards! » the mainstream media and their stars will say (…) But the upper classes (…) will of course be able to give lessons in morality, and refer any objections to the far right; private schools are there, for example, to protect their offspring from the social consequences of their narcissistic good feelings »(4).

Didn’t the Federation of Enterprises in Belgium (FEB) itself see the terrible opportunity « to seize this opportunity and offer a chance to asylum seekers or refugees within your company »(5). The « luck » of course is not that of these refugees who will be exploited for even less than their Belgian colleagues and who are prepared to accept much harsher working conditions, but that of the bosses who see only greater profits generated by greater competition between workers. The bosses who will have created the racism that will ensue will therefore have achieved four things in particular:

- increase their profit and inequality what they call « competitiveness » between workers;

- to give the illusion of their magnanimity and their interest in the fate of the refugees;

- to make us forget how their warlike, extractivist, and competitive worker policies are the cause of the population movements;

- diverting the anger of the workforce onto refugees, when both should be fighting side by side against the bosses.

So they create racism while pretending to fight it. Or rather, they do not fight the manifestations of racism that are direct secondary consequences of an unequal system, but advocate « diversity », that of the blacks on the board of directors, or gender parity on the board of Wall-Mart, or the quota of refugees among their employees, which in no way question their operating system.(6) Anti-racism that requires little commitment, except to be able to endure social cocktails, or to walk in the rain during « demonstration » routes marked out between two points of the city, without questioning the iniquity of the socio-economic system, as opposed to a true commitment to fraternity between peoples.

The right bourgeois thinking will obviously immediately see in these remarks a right-wing drift, a closure to « multiculturalism », paying little attention to our arguments, which in this kind of case does not care about reason and reacts instinctively, seeing Le Pen everywhere. However, we must remember that we reject this ersatz collective, this unity of monads which the power is so pleased with(7)We are now in the process of creating a true association of diverse and united beings who recognize where the power lies and want to fight it, without hiding the fact that we are also dominated in our minds, more or less:  » The oppressor’s most powerful weapon is in the mind of the oppressed, » said Steve Biko.

Already in 1864, faced with the employer’s strategy of breaking strikes by bringing in foreign workers, the English union, anxious to unite the industrial classes of different countries, wrote: « We hope that such relations will soon be established and will result in raising the too low wages to the level of those that are better shared, to prevent the masters from putting us in a competition that lowers us to the most deplorable state that suits their miserable avarice ». Moreover, he was already guarding against any accusation of xenophobic drift by pointing out: « The fault is certainly not with the brothers of the continent, but exclusively with the lack of systematic liaison between the industrial classes of the various countries ».(8)

Business leaders and primary anti-racists are thus in agreement on this issue. Because in denouncing those who try to show that the so-called societal fights (against racism, sexism, homophobia…) are often used to hide the really emancipating social fights, the bosses and the antifas are doing one and the same thing: they are leading a false « multiculturalist » fight where the « respect » for the other most often hides a deep disrespect, and the anti-racism an imperialist racism; where a universalism is most often imposed from the start while the real universalism « is always the result of a dialectical process and of political struggles carried out in common »(9). However, « the problem with the politically correct multiculturalist fight against racism is not its excessive anti-racism, but its concealed racism »(10).

Basically, it is more important, rather than looking at the actions of foreign leaders in their own countries (in Iraq, Libya, Syria…), to see what this focus on elsewhere allows us to conceal in our own countries. Thus, for those who are not convinced by any of the arguments in this article — they will probably have stopped reading before — we will add the one that will perhaps provoke their deepest anger, namely that inquiring into the veracity of the allegations of abomination of the non-Western other, repeated daily by the gramophones of the mass media, is secondary. Whether the tyrant is one or not, we know from historical experience that the West does not intervene out of abnegation, that its interests are not gratuitous, that it defines what a victim is in a biased way. Otherwise, he would have denounced more massively the crimes against the Serbs in Kosovo, for example, or would have tried to avoid the massacres of Palestinian civilians by the Israeli army. The most formidable enemies are in fact its best allies: Saudi Arabia, Qatar.

The West therefore needs an enemy. Rather than hating the « bad », he actuallyadores it, because it is necessary for him. If the other is « abnormal », it is above all, more than naming the other, to name us « us » and to state that « we are normal ». If we place so much importance on chasing the « bad », it is mainly to define ourselves positively. This explains the media’s relentlessness, the triumphant monomania of blacklisting the other, who would be everything we are not. The « enemy » never exists in relation to itself, in the absolute, but in relation to the one who names it. Bloodthirsty or not, everything will be done to make the public believe that he is. Meanwhile, the United States and its allies can continue their crimes and ensure their Western way of life. Non-negotiable.

One can choose that the enemy is the FN which is spreading in the working class, or the bellicose secularists who only see Islam: « What is new, and really disturbing, is the obsession with Islam, the frenetic secularist discourse that is spreading in the upper half of the social pyramid, and which is much more worrying, basically, than the incrustation of the FN vote in the working classes.(11) Depending on the enemy, one will choose different ways of interpreting reality and history (especially the history of the success of the FN). By not trying to understand the processes that lead a part of the people to vote for the extreme right, we would never radically exercise the thought that would allow us to grasp that the first camp (democracy and its traditional left-right alternation parties), by its iniquitous and devastating policies, has generated the second camp, the one commonly referred to as « extreme », which, strong now with its success, participates in spite of itself in defining the first camp as the one of the good. In this framework of binary thought, profitable to both camps — the politicians who run it and the dominant ones (multinationals, billionaires, stars of all kinds) — the opposition would be only a decoy, occupying the crowds while under the false alternation the great victory of the only camp really present is perpetuated: that of capital and its hold.