Preludes to transition. Why change the world? 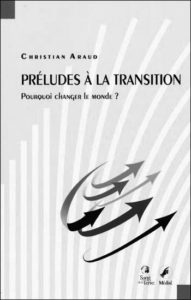 Christian Araud’s name was already known as a contributor to the journal Entropia (in issues 4 & 7). Here he is signing two books. The first one is a testimony of his professional life, of the events that led him progressively to the idea of degrowth. In this respect, his career as an international consultant in terms of development is far from being exemplary! But our man, now retired, is well aware of this. If one is grumpy, one can always see in it the confessions of a repentant. But let the one who found the way the first time throw the first stone. The problems of water, intensive agriculture, housing, transportation, etc., were encountered during his multiple trips to Malaysia, Korea, Romania, India, Mexico, Peru, Niger, Senegal, among others. His brief encounter with Ivan Illich opened his eyes to another side of the world’s reality. The writing is lively, not devoid of self-mockery and full of meaningful anecdotes. One will have understood that the reading is rather light — in the positive sense of the term — and moves away from the theoretical pensums on degrowth (which are perfectly useful and indispensable).

Change of tone with Preludes to Transition. Christian Araud delivers here a very structured, documented and argued work in favor of an essential transition, which he links to and reconciles with — there is one of the originalities of the book — degrowth. Evoking Hans Jonas and David Holmgren, the author draws up, in all lucidity, a state of affairs

catastrophic and details four likely future scenarios, « brown techno » (slow oil decline, rapid climate change), « green techno » (slow oil decline, slow climate change), « earth stewards » (rapid oil decline, slow climate change) and « lifeboats » (rapid oil decline, rapid climate change). Among the top-down initiatives, permaculture and agro-ecology represent in his eyes a kind of paragon. Chapter 5 offers avenues for action, both individual (voluntary simplicity, thrifty and autonomous housing) and collective (eco-districts, eco-cities, Noah’s Ark), names the obstacles to political action, but also its conditions, compares resilient lifestyles in the city and the country, etc. To conclude, Araud describes some concrete experiences, with their advantages and disadvantages: the Mas de Beaulieu in the Ardèche, Les Amanins of Pierre Rabhi’s association « Terre et humanisme », the Trièves in the Vercors, to Cuba and, of course, Totnes in the United Kingdom, where the transition movement was born. Between pessimism and optimism, the author draws the contours of a future. We could also summarize his position by the formula « nothing is acquired, nothing is lost ». ARAUD Christian, LATOUCHE Serge (preface), La décroissance ou le chaos. The journey of an international consultant, ed. The Drunken Pedalo, 2012, 200 pages.

ARAUD Christian, Preludes to the transition. Why change the world?, ed. Blood of the Earth, 2012, 240 pages.