Our right… is not negotiable 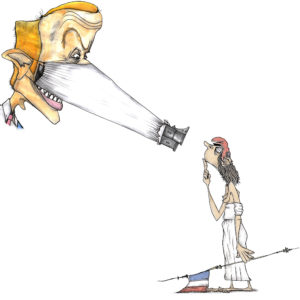 Notre Bon Droit (NBD) is the result of the meeting between Isabelle, a nurse from Pont-à-Celles, and Stella, a European lawyer living in Brussels. Isabelle, who granted us this interview, had realized by the end of March 2020 the abysmal gap between the alarmist speeches of the government, relayed as such and even amplified by the media, and the reality on the ground: « Where is the pandemic? Very quickly, she protests against the climate of fear aiming at making the citizens accept the battery of measures attacking their fundamental liberties. Both in her professional environment and on social networks, she tries to reassure people that the virus is really harmful but limited, and to warn against the security drift. For her part, Stella makes the same observation at the European level, where she notes another disturbing phenomenon: with a few exceptions — including Sweden -, the majority of the European Union member states spout, « to the point », the same discourse aimed at provoking panic and flabbergasting, and often adopt the same measures  » that have jeopardized the rule of law and the fundamental rights and freedoms of citizens since the beginning of this unprecedented crisis . The two women then decide to join forces to better resist. At the beginning of 2021, they founded NBD in order to inform citizens about their fundamental rights, to alert national and European decision-makers, and to lead legal actions benefiting the largest number of people (unlike the « Class Actions » in the United States, Belgian law does not allow for collective legal action). They are surrounded by jurists, lawyers of Belgian and European law, as well as dozens of scientists, researchers, doctors, both Belgian and European, in order to carry out their actions. With an extensive website(1) and multilingual, a dynamic Facebook forum and a YouTube channel, NBD’s audience is growing rapidly. Its newsletter has 20,000 subscribers to date. « We can estimate our number of active followers across all networks at 40,000 « . In addition, NBD is expanding in France and Quebec, and is also active on a European scale, via NBD Europe. One of NBD’s first actions concerns the contracts between the European Commission and pharmaceutical companies regarding vaccines. It is important to note that the contracting parties have chosen Belgium as their jurisdiction. Having obtained, thanks to whistleblowers, a copy of these contracts hidden from both the public and the European Parliament under the pretext of « business secrecy » (!), NBD discovers that the Commission has agreed to exonerate the groups from any responsibility in the event of ineffectiveness or harmfulness of these vaccines. However, thanks to a thorough legal analysis carried out by the Debandt law firm, NBD has demonstrated that these clauses are considered to be unfair under Belgian law and should therefore be declared null and void. NBD therefore alerted the Deputy Prime Minister and Minister of Social Affairs and Public Health, who must have felt all the more concerned because, like the other Member States, Belgium was perfectly aware of the content of the contracts, as the Council had given the Commission the negotiating mandate beforehand and had agreed to the final text afterwards. However, after denying the evidence, Frank Vandenbroucke refuses any dialogue with NBD. Moreover, following a brief passage on Bel-RTL, the doors of the media slam brutally in front of the association, which does not even manage to publish the least white card in the newspapers.

Far from being discouraged, the association intends to prepare an appeal against the European contracts for the purchase of covid vaccines and is against the European digital certificate. At both the national and European levels, it carries out citizen actions, including a letter-writing campaign to Members of Parliament against the Pandemic Bill in Belgium and a campaign to raise awareness among Members of the European Parliament of the legal and scientific problems posed by the European digital certificate. Optimistically, Isabelle believes that citizen pressure worked on the pandemic law because, while the government was planning to pass the law in the spring, the vote will finally be postponed to the low point of July, when public attention is focused on the floods. At the same time, the executive is imposing a « Covid Safe Ticket » (CST) through a cooperation agreement between the federal government and the federated entities. This CST is then presented as being able to again allow the holding of events gathering more than 5,000 people (then 1,500). Concretely, in the summer of 2021 , only three events are concerned: the festivals of Tomorrowland, Pukkelpop and the Grand Prix of Spa-Francorchamps. Two in fact, because the organizers of Tomorrowland prefer to cancel the event rather than comply with it. From the outset, NBD believes that  » the invention of this huge gas factory is in fact a Trojan horse to access all personal data, and therefore the digital identity of everyone, in complete disregard of the RGPD(2) . The appeal lodged by NBD was dismissed by the judge using a curious argument: while he agreed that it was disproportionate and infringed on freedoms, he nevertheless validated the CST because, according to him, « it is either that or a return to confinement », which has no scientific basis.

Unfortunately, the analysis of the « Trojan horse » is quickly confirmed: as early as September, the Brussels and Walloon parliaments vote the generalization of the aforementioned CST to cafés, restaurants, cinemas, theaters, etc. ! But of course, all for a limited time, right?! All those who have only limited confidence in this umpteenth promise of the authorities will be eager to help NBD and, if they have the means, to answer its call for funds to support our « faltering democracy ».(3) NBD is a volunteer-based organization that has difficulty finding the necessary funding for its legal actions, both at the Belgian level and at the Court of Justice of the European Union. All the necessary information is available on its website, which also includes very clear « toolboxes » per country to inform citizens on legal, scientific and health matters.