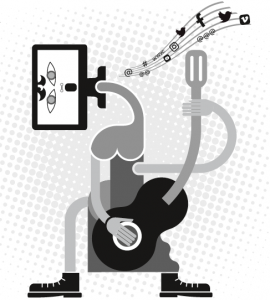 Music is a magnificent human invention. It has its roots, at least in part, in the song of the birds that lived (so many have already been murdered by industrial society), in the nature that surrounds us. Music comes from singing and singing is music. It is an extraordinary language and as such represents a major evolution, as described by Lewis Mumlford(1), in the lives of human beings. It is the heart, soul and body of our lives. The instruments, once fashioned by humans, have come to extend and accompany this singing. Music is a human creation and it exists only through the grace of human relationships. Music is shared with others in a given space and time.

As someone who has had the good fortune and privilege of giving hundreds of concerts, from solo to big band, I know that music is invented in the relationship with other musicians and with those who are near me and who listen. This carnal and human presence is indispensable. It is because I see these others, musicians and public, that I feel the vibrations of their bodies, that I see their faces, read their emotions, share their smiles that my practice makes sense.

It is this communion of souls and bodies that gives life and musical poetry. The music that can be heard is the result of these constant exchanges between us. What I play is thus transformed, modified, sublimated by what I see and feel, by this coming and going of indefinable, unclassifiable, unique sensations. If this time and space are not shared, then the song is no more, it is an ersatz music.

If we’re all locked up at home, then let’s not make music. Let’s not pretend that it is still possible under these conditions. The magic that melody reveals, the trance that rhythm confers, dies from this ignoble masquerade to which so many so-called musicians have given themselves up. Internet does not reinvent life(2), it transforms it into a parody empty of love, empty of the very essence of our human condition, empty of the carnal absence of the other. Let us refuse this existence alienated from industrial machines that, far from our eyes, murder, pollute, poison, enslave and, above all, dig the grave of humanity(3). Music only needs, but it is essential, the other, others to invent the song of the harvest, the song of joy or sorrow, the song of a dignified life. You do not measure to what extent your submission to the cult of the Internet, which does not date, alas, from the era of the deconfituré confinement, but which it amplified, is the swan song of the music and the musicians. You will be swept away like so many others, waiters, cashiers, farmers, doctors, receptionists…, by robots which have the advantage, in these times of collective psychosis of indefinite duration, of not contaminating anyone and of responding exactly to the wishes that the connected machines attribute to their followers.

Your subjection to the permanent immediacy manufactured by smartphones connected to the Internet has destroyed the notion of past, of consciousness of history. Thus you are no longer able to realize that little by little the song has been emptied of its substance and that, if we do nothing, it will accelerate.

Computers have already greatly opened this mutation by allowing the advent of « music by the meter », inhuman repetition of the same two, three or four bars over and over again, to the point of nausea. This destroys the soul of musical creation. The ultra-liberal turn of the 1980s had already robbed it of its popular and political strength. Look around you, music is massively consumed, but it does not accompany societies anymore. Singing is no longer part of everyday life or the rituals of life. You who call yourselves musicians and who have converted to the cult of the Internet, have become the docile and blissful servants of a digitized industrial system whose only purpose is the alienation of humans to connected cages, and as a consequence the destruction of the planet.

» As the chansonnier Pierre-Jean de Béranger was sentenced to nine months imprisonment and a fine of ten thousand francs, the crowd invaded the courtroom and several newspapers published the incriminated songs. Popular emotion was at its peak and police reports were concerned about the extent of the demonstrations of discontent, especially from the students of the Latin Quarter. Two years later, in 1830, the insurrectionary days known as the « Three Glorious » led to the overthrow of the regime. Many commentators at the time attributed to P.-J. de Béranger, and particularly to his song The old flag, a responsibility of the first order in the exasperation mixed with enthusiasm at the origin of this new revolution(4).  »

Hervé Krief, day 101 of the year 01 of the confinement (June 26, 2020), troubadour installed in Creuse, author of the book Internet or the return to the candle (republished by Écosociété in 2020), member of the collective Écran total.