Nuclear: the containment of information worked well for eight months 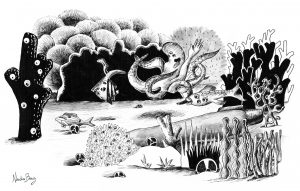 The year that is ending will have been rich in events that, in other times, would have passed less unnoticed. On April 15, while Belgium was totally confined, ONDRAF (National Office for Radioactive Waste and Fossil Materials) launched a major public consultation on its project for geological or underground storage on national territory as the final destination for high-level radioactive waste from the activities of Belgian nuclear power plants.

A consultation on such a serious project, whose consequences will be felt for centuries, even millennia, and at a time when everyone is under house arrest, was untimely to say the least and had to be postponed. This is what four associations (the ASBL Fin du Nucléaire, Friends of the Earth and Grappe, as well as the cooperative Rescoop Wallonie) demanded. They pointed out that the initiative of ONDRAF could be considered as a misuse of procedure and, consequently, demanded a new consultation during normal times, during which each citizen could obtain an answer to the questions that he or she could ask, both on the legal data and on the scientific data of the dossier.

Not only didONDRAF not respond to this request, but the federal Parliament endorsed this refusal by rejecting a proposal, albeit a very moderate one, tabled by the Green MPs, who were asking for an extension of the consultation period beyond the June 13 date. This request was based on the attitude adopted by the Regions for other public inquiries. The good news is the position taken by the three regions against the ONDRAF project. All of them have declared that they refuse any geological storage on their territory. A slap in the face that’s nice to report!

At the same time, between April 4 and 26, forest fires broke out in the contaminated territories near the Chernobyl plant. Over several hundred square kilometers, these fires have resuspended radioactive substances that have accumulated on the ground and in the vegetation for 34 years. The city of Kiev, about 100 km away, was affected by caesium 137 fallout; an activity more than 700 times higher than « normal » was measured there. Data for strontium-90 and transuranics such as plutonium and americium were not provided.

The fires were finally brought under control; nevertheless, the event reminds all those who would like to believe that the 1986 disaster is definitely a thing of the past, are seriously mistaken and deceive us. The danger of the site of the accidental power plant remains very real, especially when we know that thousands of irradiated fuel assemblies are present there and that climate change multiplies the major risks of fire(1).

Radioactive contamination of forests and water is also a major concern in Japan, in areas near Fukushima. To obtain the award of the Olympic Games scheduled for last summer, the Japanese government had announced that the decontamination of sites evacuated after the major accident of March 2011 would be completed and that the consequences of the disaster of March 2011 would be fully controlled. The international community has pretended to believe this fable, which has been largely disproved by the facts to date.

In the Namie forest, about 20 km northwest of the plant, in the so-called « difficult return » zone subject to access restrictions, the radioactivity measured last August was more than 50 times higher than the levels found in downtown Fukushima(2). The rivers receive a continuous supply of cesium accumulated in the forests; this supply decreases only slowly so that the contamination of freshwater fish remains important and keeps certain carnivorous species unfit for consumption.

THE POLLUTED WATERS OF FUKUSHIMA

Another problem, equally worrying, is the fate of the immense quantities of water used to cool the molten fuel of the damaged reactors. These 1.23 million tons of radioactive water are currently stored in very large tanks (more than 1000) which, according to the operator TEPCO should reach saturation by mid-2022. Faced with what is increasingly clear as a dead end, TEPCO and the Japanese government recently announced, in the midst of the Covid-19 epidemic, a forthcoming decision on the option to « solve » an intractable problem: to gradually discharge these vast quantities of radioactive water into the Pacific Ocean.

According to its promoters, this option would involve a preliminary filtration to retain the most problematic radioactive elements, but it would nevertheless lead to a significant radioactive pollution of marine ecosystems and fish fauna. The outcry from Japanese consumer associations and fishing federations has temporarily caused the government to back down. We are waiting for a political reaction at the international level and in particular from the European Union to denounce what is clearly a violation of environmental law.

Parallel to these events concerning civil nuclear power, on September 21, an exceptionally far-reaching political statement was made concerning military nuclear power. The position paper is an open letter of support for the Nuclear Weapons Ban Treaty (NWT) signed by 56 former presidents, prime ministers, foreign ministers and defense ministers from 20 NATO member states as well as Japan and South Korea.

I can’t resist the pleasure of sharing a few succulent passages from this historical message with Kairos readers:

» We call on our current leaders to advance disarmament before it is too late. An obvious first step would be to declare without qualification that nuclear weapons serve no legitimate military or strategic purpose… By claiming the need to be protected by nuclear weapons, we encourage a dangerous and mistaken belief that such weapons enhance security… There is no doubt that a new nuclear arms race is underway and that a disarmament race is urgently needed.

It is time to end the era of dependence on nuclear weapons for good. In 2017, 122 countries took a courageous and long overdue step in this direction by adopting the Nuclear Weapons Ban Treaty. This Treaty will soon become binding international legislation…

To date, our countries have chosen not to join this majority of States in supporting this Treaty. But our leaders should reconsider their position. We can no longer afford to procrastinate in the face of this existential threat. We must be courageous and bold and adhere to the Treaty. With nearly

14,000 nuclear weapons, spread over dozens of sites around the world and in submarines that patrol the oceans at all times, the capacity for destruction is beyond imagination. The Treaty on the Prohibition of Nuclear Weapons lays the foundation for a safer world, free of this ultimate threat… We must adopt it now « (3).

Among the 56 signatories of this open letter are former UN Secretary General Ban Ki-Moon and two former NATO Secretaries General, Javier Solana and Willy Claes. In addition to Willy Claes, who was also Belgium’s Minister of Foreign Affairs, there are also three other personalities from our country. Eric Derycke, also Minister of Foreign Affairs, Yves Leterme and Guy Verhofstadt, both former Prime Ministers. This open letter went almost completely unnoticed, as the Belgian press probably considered it a minor event.

A few weeks later, Honduras ratified the TIAN and as the 50th country to have done so allows the Treaty to enter into force on January 22, 2021! This information was reported in most of the Belgian daily newspapers but did not find any place in the TV news… almost entirely taken up by the anxious chatter of experts about Covid-19 and the journalistic comments on the latest Sciensano figures!