Manipulate the planet! When the experts prepare us for it 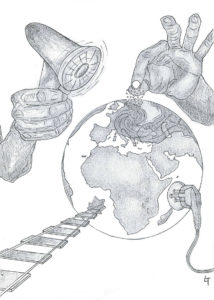 Very few people have heard of the LOHAFEX or SPICE projects. And that’s normal. There has been very little, if any, press coverage, probably to avoid provoking a much-needed reflection on geoengineering and its implications.

LOHAFEX is the project of a German-Indian team of scientists aiming to test a technique of ocean fertilization by adding iron particles (LOHA = iron in Hindi; fex = fertilization experiment); in 2009, the German and Indian governments gave their authorization for a mission which took place between January 7 and March 17, 2009. It consisted in drowning 6 tons of fine iron particles in the waters of the Southern Atlantic Ocean over an area of about 300 km². The objective was to show that it was possible to stimulate phytoplankton production and thus massively increase CO2 sequestration. The generalization of this practice, its initiators hoped, could thus contribute massively to limiting global warming. In addition to the fact that the first results of the experiment were disappointing, it provoked an outcry from environmental associations and the disapproval of those responsible for the Convention on Biological Diversity, who judged that this type of experiment violates the Convention and the moratorium on geoengineering adopted within it.

SPICE is the project, finally aborted, resulting from a transdisciplinary reflection initiated in the United Kingdom by three of the seven Research Councils. The project aimed to test in the open air the injection of stratospheric aerosols (SPICE is the acronym for Stratospheric Particle Injection for Climate Engineering). It was supported by four universities, several government departments and the private company Marshall Aerospace.

After the press conference marking the launch of the project, in 2011 the popular reaction was not long in coming. An avalanche of protests broke out against its promoters. In April 2012, the experiment was permanently cancelled.

GEOENGINEERING: WHAT IS IT?

It’s not just about seeding the oceans or reducing sunlight. Geoengineering consists of a set of broad techniques for manipulating planetary ecosystems in order to adapt them to the current industrialist and technologist dynamics. In fact, as the authors of the report « The Great Climate Fraud » (1) brilliantly express it, geoengineering aims to entrust a self-proclaimed geoengineering elite with the mission of transforming the planet into a cyborg operated by them, entrusting them with the de facto management of the world.

Because geoengineering is not the invention of climatologists but of engineers. In order to develop tools powerful enough to have a real impact on climate, geoengineers must ignore or minimize the complexity of the living, interconnected ecosystems they want to change.

The mad doctors of the climate, even if they have been rather discreet since the setbacks experienced by the initiators of SPICE and LOHAFEX, have not disarmed.

Many studies have been undertaken and completed in recent years. Canadian physicist David Keith, attached to Harvard University, is the world’s leading figure in geoengineering. He has continuously proposed projects to deploy solar radiation management techniques on a large scale and has obtained the support of several well-known billionaires such as Richard Branson and the ubiquitous Bill Gates to finance his work, who has devoted several million dollars to it, of course, for the good of humanity.

Among these projects, there is one that has quietly made its way while we are all obsessed with the fear of a nasty virus. It is about SCOPEX (for Stratospheric Controlled Perturbation Experiment), a project which is called to make its first steps in this month of June 2021. The project involves spraying calcium carbonate dust (Ca CO3) into the upper atmosphere in order to mitigate global warming. The first step is to launch a balloon carrying scientific analysis material 20 km high. The launch is scheduled to take place near the city of Kiruna in Sweden thanks to the collaboration of the Swedish Space Corporation. The second step involves releasing small amounts of calcium carbonate to test atmospheric reactions and pave the way for a full-scale experiment by the end of 2022.

Of course, at this stage, it is still only a relatively small-scale experiment. But, above all, it is a question of obtaining the guarantee of representative scientific organizations so that the experiments of solar radiation management are legitimized in the eyes of the political leaders and the public opinion. There is no point in denying it. The Paris Agreement in 2015 created the illusion that a common political will was born to fight climate disruption.

The facts are there to show that the industrialized countries have above all obtained, thanks to this agreement, a welcome respite to postpone any concrete action. Five years later, there is no evidence of a decline in global greenhouse gas emissions. We are still at the stage of declarations of intent with long-term commitments, while avoiding the slightest questioning of past choices.

Everything is being put in place to make people accept the idea that geoengineering will offer us a range of tools that we will not be able to do without if we really want to limit the damage caused by climate change. Indeed, the main asset of geoengineering lies in the fact that it is part of the current dynamics. Thanks to technological innovation, we will be able to mitigate the misdeeds of the technologies inherited from the last century, while improving them and, above all, without giving up the frenzy of production and consumption that they have allowed.

THE DUBIOUS ROLE OF THE IPCC

As early as 2011, the IPCC (Intergovernmental Panel on Climate Change), has been very ambitious about geoengineering. At that time, he entrusted a group of experts, including many scientists involved in geoengineering research, with the task of evaluating the potential of geoengineering techniques!

In its 5th Assessment Report in 2014, the IPCC developed the concept of negative CO2 emissions, which implies the implementation of future technologies capable of massively removing CO2 from the atmosphere. Thus, thanks to the work carried out or sponsored by oil groups, bioenergy with CO2 capture and storage (BECSC) is clearly taken into account in most of the IPCC scenarios that make it possible to limit global warming to 2°C, by removing CO2 from the atmosphere.

The IPCC strongly believes that large-scale deployment of BECSC will one day be necessary, while at the same time admitting the likely unsustainability of the technology and the risks and uncertainties it entails!

Its 6th evaluation report is expected by 2022. According to the North American NGO ETC Group, which analyzed the draft report, geoengineering is becoming more and more apparent as a possible means of adaptation and mitigation.

The new IPCC report will discuss most existing geoengineering techniques at length. This is due to the influence of the oil industry and the military industry.

The current chairman of the IPCC himself, an economist and former EXXON employee, considers that geoengineering must be taken into account. We must be vigilant when the 6th IPCC report is officially published and encourage a vast democratic debate at the international level to highlight the unacceptable impacts on humanity of choices inspired by megalomaniac engineers and supported by power-hungry billionaires.