Maintenance of order? Not for everyone…

On February 8th, lobbyist Koen Blijweert passed away at the age of 64. The French-speaking press did not relay this information, whereas in Flanders, several newspapers published articles on this death.

The term lobbyist used most often for Blijweert is not ideal, as we will see. In fact, Blijweert represented everything that our society cannot stand today: corruption, organized state crime, collusion, nepotism. In a word, the ultimate decadence of a rotten state.

He was the son of Renaat Blijweert who managed the Amelinckx companies in the seventies. He was nicknamed the man with 70 interrogations. He had been questioned countless times for his involvement in various « cases », but had never been convicted.

He had started his « career » by creating a company specialized in pest control, which some suspected of paying bribes to obtain public contracts.

His links with the all-powerful CVP in general and with Léo Delcroix and Jean-Luc Dehaene in particular were known to all.

He had been involved in a huge VAT carousel set up by the company Action Trading but the statute of limitations had put an end to the proceedings, as if by chance.

He also entered the annals of organized economic crime by sending the deputy public prosecutor Dirk Merckx to a brothel in Amsterdam with his car, driver and credit card in exchange for a halt to the prosecution of him.

When the position of the CD&V became less powerful, it turned to Bart De Wever and the NVA. The famous dinner at Bruneau’s where the latter was present as well as Didier Reynders and Jean-Claude Fontinoy(1), Blijweert was also there as an advisor of De Wever.

Similarly, he was the leader of the sharing of kickbacks in the contract for the relocation of the federal police to the Administrative City and RAC 2. In this file, he officiated with the same Fontinoy for the MR and with Luc Joris(2) and Michèle Lempereur for the PS(3).

His death leaves only the former boss of the PJ Glenn Audenaert who, after 10 years of more or less sabotaged investigations, is being prosecuted for corruption, money laundering, violation of professional secrecy and forgery, in this case(4).

Blijweert had a splendid chalet in Megève in which he invited many Belgian politicians, including Bart De Wever. According to Apache, the premises were equipped with numerous cameras useful for keeping track of the romps and confidences of our leaders(5).

Blijweert was the carrier of the CVP, then the CD&V and then the NVA. He made a pact with the socialists and the Walloon liberals. Everything was good as long as the commission was there. And the more evidence he could keep that his partners had their hands in the chocolate pot, the better.

As nature hates a vacuum, it has already been replaced.

How much longer do we have to put up with this kind of individual?

The summit in the corruption affair linked to the move of the federal police to the RAC 2 has just been reached thanks to the revelations of the newspaper De Tijd(6). It is reported that the Special Tax Inspectorate (ISI) has signed an « amicable » agreement with Franck Zweegers, the owner of the Tour des Finances. All of this has remained a secret until now. Clearly, Zweegers and Blijweert were able to hush up the case, which resulted in limited costs for them.

How much longer do we have to put up with this kind of individual? Is our judicial system capable of protecting our democratic system, or what is left of it, from « Koen Blijweert »? It is permissible to doubt it.

Shouldn’t our police forces be redirected to this type of mission rather than policing its own population?

Isn’t the crisis we are experiencing the opportunity to get rid of this type of parasite?

To ask the question is to answer it. 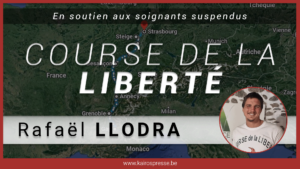