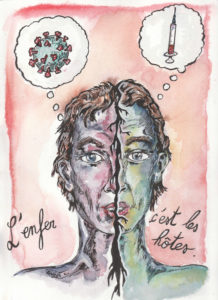 For this post, I would like to not put the letter « e » with the grave accent once. A question of a star’s whim? Why not, after all, following my wonderful post on the vaccine. In this regard, I would like to express my sadness, my frustration, even. I was expecting your barrage of insults, mountains of quips, insults like « you conspiracy nut ». Nothing at all. I would like you to know that I was amazed. The hot season has allowed me to read many amusing things, first of all the double question, that of the vaccine selfishness and the imprudent people, put in the pillory by other people undoubtedly more altruistic slumped in their sofa. I have become cautious with time and will only aim to talk to you about caution and providence. And if I’m not going to use the letter e and its grave accent, ask my drug and computer dealer who will explain to me that the keyboard is at the end of its useful life — after 5 years — and that I’d better stop using this machine and buy another one. I wasn’t being very careful with my words, though. I was following the adage of Father Chirac who, it is said, did not only say stupid things, he also did some (hello, 1997? Uncle Jospin says thank you). Chirac said:  » When caution is everywhere, courage is [sic] nowhere « .

So, here we are, between three waves of coronavirus and three booster shots, the expression where the link was openly made regarding caution and this fact of (maybe) thinking only about oneself, between the people who wanted to have some distance, invoking caution, and not getting vaccinated and those on the other side (the good side, of course) who accused them of only thinking about themselves and even that they are anti-vaxx and that they are going to vote for Eric Zemmour (or to get fired up for Lionel Messi, to each his own). Now, first point of an argument that will count 375 without the appendices (I know how to motivate a readership), the attitude that the first ones show does not make me think of anything else than this prodigious term, caution.

As usual, this article has no vocation to be rigorous and even less reliable. It seems to me to be at least respectful of the readership of Kairos to make this preliminary warning. May the noble audience of this newspaper forgive me.

So what is prudence? Get out your Gaffiot, which tells us that the word « prudence » comes from prouidentia, feminine noun of the 1st declension, coming itself from prouidens, a beautifully banal present participle from prouidere, verb of the 2nd group (friends of Latin, good evening!). Pro has an interesting meaning: it evokes both the before (in geographical terms) and the after (in temporal terms). As for uidere, at a time when we are constantly shriveling the ears of his interlocutors with « you see? », I will not do you the insult of … Yes ? Good. Uidere includes the polysemy of the verb « to see », as much « to observe with one’s physical eyes » as « to look by means of one’s spiritual eyes »…hence « to understand, to grasp ». Let’s stop for a moment to consider this abundance of meaning: it is as much a matter of  » seeing further than the end of one’s nose » as it is of « not having eyes bigger than one’s stomach « !

Revolutionary! This is because it is as much a question of thinking about what your action will cause — on yourself as on others — as it is of being fussy, weighing the pros and cons, going further in time and space than your favorite newspapers recommend. In other words, it’s about taking the time, without being harassed by the constant barrage of headlines and ads promising a bright future for people who get vaccinated. National unity is beautiful. So that’s the case for caution. We will note for the good mouth that the adjective « prude » would derive (it is well the only case where that would derive!) him also of the same root as « prudent ».

And in this case, this caution seems to be used in a fair proportion by its users. One might reply that this caution is not in order, that time is running out and that the variant is knocking on our doors with the devastating smile of a German minister who is taking part in a ceremony to honour the victims of the floods. Prudence here is rather in the camp of the people who are careful and will be vaccinated when it will seem to them salutary or important (obliging someone, it is not to incite him to be careful, we will return to it). They see the side effects of vaccines, their benefits, but also the problems that can arise from them. If one understands the government’s logic (I assure you that there is one, Jacques Attali said so), it is truly imprudent. It aims only at the short term by evacuating the problems of conscience of a fringe of the population which expresses itself, it does not see further than the end of its territory and it discriminates the other countries which do not have its means. The lamentable race to the vaccine shallot once again leaves on the side of the road to collective immunity all those who hesitate, who do not know, who have heard chilling stories of side effects… Or those who can’t afford to ride in the Rolls Royce of vaccine privileges. In doing so, they are being more pseudo providential than prudent. Yet (feel my love for drama and strong dramatics) these two words come from the same root. Nevertheless, prudence is human and providence is divine. As for providential men, I refer to Kaïs Saïed in Tunisia or Emmanuel Macron in France… There is a kind of aberration in the use of terms: where we want to be prudent, we show ourselves to be the holders of a necessarily positive providence, yet providence is only expressed after the fact, having seen the practical consequences of a word, a gesture or a behavior. Less often before… This ties in with Chi-Chi’s phrase that I took as one of my hooks. It reminds me of the great actor and playwright Peter Ustinov who said that  » courage is only made of unconsciousness, while cowardice is based on solid information « . The argument of some proselytizers of compulsory vaccination is similar to this point: let’s get vaccinated, even if we are against it, but let’s do it for the others… And if one is not sensitive to this, cornegidouille! We are cowardly and so selfish! All the more so as caution — or even resignation… — is also necessary, and much more than we think, in the head of many people who have been stung. They see the future that lies ahead of them. They don’t want to, for their own sake. They are resigned to being vaccinated. In this respect, the prodigious publicity campaign for the vaccination in Brussels has put forward benefits for oneself much more often than for others: to go on vacation, to party, to play sports, to go to the soccer … And the others only come in one poster (out of 6 different ones produced). Nespresso, what else ? Vaccine selfishness is thus everywhere. And a certain form of prudence (we see what awaits us or threatens us) too.

I believe that many people who are cautious (to say the least!), in the first sense of the word, about the vaccine and who are easily lumped into the « anti-vaxx » camp, are infinitely more cautious than others who have received the vaccine and believe they can do whatever they want, as in the famous « life before ». It is not all, we must be quick to say. Nevertheless, this trend exists, and it could be summarized as « Let’s break the limits since we are stronger than the virus and the vaccine makes us stronger than Superman (but only after three doses) ».

In the scientific field, on the other hand, it is normal to be cautious: the truth is never acquired for ever, it will change according to discoveries and experiments. « Prudent » by nature, science can never be accused of selfishness. Unless Big Pharma … Sorry? No, I didn’t say anything! Caution, seen negatively, is in fact everywhere (except perhaps among some/all politicians, delete as appropriate).

Returning to my original topic, and to vaccine selfishness, what seems to be an aberration and a horror of language makes sense: after all, selfishness is nothing more than taking care of oneself, protecting what is most important to one. This selfishness can only be prudent. But it must also be realistic: it must be nuanced with solid arguments, and not turn to egotism which is the real plague (I leave aside egocentrism, although everything in our individualistic society pleads for such a preference: my face before that of others, and everything must revolve around me, like this French woman, in the middle of the coronavirus pandemic in the West Indies and who complained about having to go back to France, who had rabies and hatred.) Our society is very sick: it lacks prudence, is inflated with egotism to the point of death, and adds to this (I hope to have demonstrated this through my columns) a total disregard for the accuracy of words. Let us never forget Camus’ phrase: « To name things badly is to add unhappiness to the world « . Aren’t we acting totally in this direction if we talk as if it were a bad thing, harmful and toxic, the vaccine selfishness? Are we not plunging into a kind of vaccine religiosity, which is becoming the real pass to access society’s activities? And one can ask oneself if, in this framework, religious, even mythical « providence » is not insidiously replacing the serene, concrete and protean « prudence ».