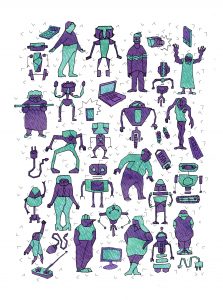 We have entered the age of robots. In any case, this is the message that is abundantly served to us by the media: a message that invites us to rejoice in the multiple services that will make these new companions, as docile as they are, indispensable to our happiness
than benevolent.

In order to remove any possible reluctance, promotional initiatives have multiplied in recent months to familiarize us with these strange creatures of living appearance that are robots.

French robotics startup Aldebaran, acquired in 2015 by Japan’s SoftBank, has developed its first humanoid robot NAO, billed as an ideal companion that is engaging, interactive and customizable. To date, Aldebaran boasts of having sold 9000 NAOs worldwide during a commercial adventure that started in 2006. NAO provides reception and concierge services in hotels, greeting guests and providing information in several languages.

In Vendée, in a specialized center of the association Autistes sans frontières, NAO develops special relationships with children and, according to its designers, succeeds in calming them and improving contacts with adults.

But Aldebaran also offers ROMEO and PEPPER, other humanoid robots, younger and just as friendly. ROMEO has been designed to assist the elderly or people who are losing their independence. Its size (1m10) has been thought so that it can open a door, climb a staircase or catch objects on a table. As for PEPPER, intended primarily for companies, its task is to welcome customers, accompany them and guide them according to their requests or desires. PEPPER is also responsible for entertaining and informing customers « to optimize the performance of the sales force ».

If you have any doubts about PEPPER’s capabilities, you should know that the SNCF has chosen it to host, pilot and entertain
passengers in 3 stations in the Loire region (Nort-sur-Erdre, Les Sables d’Olonne and Saumur). This is a world first in the transport sector and is the pride of the French railways. And that’s not all. PEPPER is also present in Europe in Carrefour hypermarkets where it entertains customers by proposing playful animations for those who have kept their childish soul. He also assesses the level of customer satisfaction at the end of the store by asking them a series of questions…

Very recently, the new semi-humanoid robot LEENBY from the start-up Cybedroid was presented at the Cité des Sciences in Paris. LEENBY has been designed to evolve in hospitals, medical institutes as well as in the family environment. Note that LEENBY is 1m40 tall for only 30kg and 20 degrees of freedom. It can work autonomously for 8 hours. Its many sensors allow it to perform a wide range of activities: agenda management, online information search, reception and reading of emails, gas and smoke detection… It can also be a photographer, a receptionist, a smartbot (in other words, an intelligent robot), a supervisor, a remote control. It can communicate via network through Bluetooth 4.0 or through a 3G/4G chip. LEENBY obviously won over François Hollande since, no doubt dazzled by this new progressive advance, the future ex-president of France proudly posed at his side for posterity (See La Libre of March 30, 2017).

It is difficult for any moderately attentive observer to miss the fact that the tasks performed by NAO, ROMEO, PEPPER and LEENBY are still performed by women or men today. Unlike humans, robots have obvious advantages: they are even-tempered, they don’t make demands, they are never tired or sick, and they are completely docile. In addition, they don’t take vacations and never sleep. Thanks to the development of cognitive sciences, they are more and more « intelligent » and able to decide for us.

Deep Knowledge Ventures (DKV) is a Hong Kong-based venture capital firm specializing in the healthcare sector. On May 13, 2015, the company’s employees, summoned by the management discovered the identity of the new member of the Board of Directors. Its name is VITAL and it has unparalleled strategic analysis skills: it can compile and analyze data useful to the company in record time. VITAL is a robot with artificial intelligence that is the standard-bearer of the robolution. A « robolution » presented as inevitable that will put us, poor humans, in competition with robots.

We are called to live with this cohabitation and better still to improve ourselves. This is the project of the GAFA visionaries (Google, Apple, Facebook and Amazon); they invite us to change our status and identity if we do not want to be overtaken by artificial intelligence. This is what Elon Musk has in mind when he imagines installing a connected electronic device in the human brain with the aim of improving our quality of life.

It is also possible to store and interact directly with electronic devices. He has just founded a new company for this purpose called Neuralink(Sciences et Avenir of 28/03/2017). It thus answers the wishes of Larry Page, co-founder of Google for whom « the human brain is an obsolete computer that needs a faster process and a larger memory ». A new man, a man-machine hybrid should thus come into being, according to the transhumanist vision that is proposed to us. Are we ready to accept such a scenario?

I would like to think that the overwhelming answer is no. On the other hand, we are in danger of falling victim to the frog’s syndrome when the water temperature rises slowly but surely. When the water starts to boil, the frog is no longer able to escape death. Plunged into the tepid « robolution » today but increasingly hot over the next few years, we are confronted with the need to react quickly or risk having to endure the unacceptable in the long run. This is not what the European Parliament is proposing. In the February 2017 session, MEPs voted to adopt a European legal framework for robotics and to eventually grant robots a special legal status! This position means a « realistic » adhesion to a society that establishes the confusion between man and machine.

The proposal put forward by some politicians to tax the work of robots is intended to be critical and socially protective. In reality, it is only a derisory pretense. It is time to become aware of the anthropological catastrophe in progress; it is a question of organizing resistance and opposing the sorcerers’ apprentices of an inhuman techno-science drunk with its power.