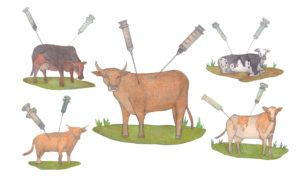 Let me be very clear about this: there is not an ounce of seriousness in the article that I propose to deliver to you. Neither a great truth, nor a big lie, just a digression that you may find welcome in these times as heavy as they are gloomy, as exasperating as they are artificially filled with hope.

The other day, during a training session that was actually quite nice — imagine for two seconds: being at home, at your table, in front of a computer, for 4 hours almost without a break! — A discussion, which was very timely, put on the exchange field a question as unexpected as interesting (you be the judge):

Forget about the refugees, the wars in Yemen and Congo, the terrorist attacks in Pakistan and Burkina Faso. Neglect the loss of a series of individual liberties and the forgetting of the gestures that make the salt of social life, and you will obtain this formidable question that makes this word pass for the Grail of happiness, the pinnacle of joy, the paroxysm of bliss.

An interminable exchange ensued, during an afternoon when, by the greatest of coincidences in Belgium, it was raining, according to an expression that is as concrete as it is unrefined, « like a cow pissing ». It is then that, in a flash of genius to which your favorite newspaper has accustomed you, I began to list in my little head a series of expressions or images related to this animal as heavy as it is peaceful. It is necessary to explain the relationship, because at first it is not obvious. Are we being taken for animals ready to be stung? Would we be considered an integral part of an urban farmyard and farm? Would we put ourselves in large enclosures like the above-mentioned animals, where we wait — more or less wisely — for our turn?

Not at all. Very prosaically, the word « vaccine » derives from « uacca, uaccae », in Latin, which means « any bovid paid to watch trains go by and humans run to catch trains, buses, subways and even bicycles ». In summary, we learn from the etymology and history of the French language that the term was first used specifically for the fight against smallpox. Indeed, the good scientist Jenner, inventor of the vaccine in question, would have used in his experiments pus drawn from the hand of a patient, who had herself contracted the disease from the udder of an infected cow. And it worked perfectly: you use the virus to fight the virus. Then, in a commendable perspective, vaccines have multiplied, although with less and less relation to Fernandel’s favorite bovine in the well-known movie. So much for the (tenuous, nonetheless) link.

But before, what was the word used, you might ask, with the same greediness as if you were to ask me if I was vaccinated (and the answer would be « I’ll only speak in the presence of my lawyer »)? The word « serum » (already well attested by the Romans) which means … « whey ». It’s back to the cow. For the less optimistic, one could choose « uenenum », an ambivalent word meaning both « the remedy » and « the poison », and, for the others, a little prayer, an invocation to the gods, and that a form of collective immunity lives on, hoping that, on the one hand, the epidemic disease disappears (with a certain cost, in terms of deaths, all the same) and that, on the other hand, the gods hear the prayers and see the gifts offered in the temples. This has not necessarily changed.

Let’s get back to the cow and all the derivatives as flourishing as the business of Messrs. Jeff Bezos or Elon Musk — like what, the crisis… but that will be for a future issue. « We are not cows to milk », « Ah, the cow! », « Do not be cow with me », « He drinks petitlait », « It is really good the vaccine », « It is a period of lean cows », « Eat rabid cow », « Death to the cows! », « It is a cow skin », « It rains vaccines as cow that pisses », « Farewell to calves, cows and pigs »… The expressions related to this peaceful animal, although a little heavy and fast (especially if the said animal, taken by a sudden frenzy, starts to run after you when you had the simple idea to come in a field, HIS field) testify to a relationship to nature, to simplicity, to happy and not so boring sobriety, that we have unfortunately lost, even if rurality still impregnates us a lot.

Thus, vaccines, which in a way take over from our grandmother’s remedies and other natural panaceas, are now only made of chemicals and complex combinations that are jealously guarded as carefully as the vaccine. Ah, hell of a vaccine. Cash cow of the pharmaceutical industries, star product of Big Pharma, geopolitical object with macro and micro cosmic dimensions as much as scopic. We would fight between neighbors, we would push each other in a family, we would envy the others, forgetting to protect ourselves and to reinforce our immune defenses while waiting for the much vaunted product to reach us. We gnaw at ourselves in doubt, we get angry at not being privileged, we are jealous of the television host or the municipal official who has benefited from it.

In the end, we do ourselves more harm than good, and we almost forget that, while we are crying to obtain our « vaccine pass », our « vaccine coverage » obtained thanks to a passage in a « vaccinodrome », thousands, even millions of people are not waiting for anything anymore, since they have already been forgotten for a long time by the Western powers and the wealthy (except when there is an attack or an epidemic that is both well localized and above all, very circumscribed: an article in Le Monde, an article in Le Soir, photos in Paris-Match and a line in The Last Hour) and that they die, slowly and silently, of malaria, diphtheria, malnutrition, drought, the aftermath of war, projectiles or bombs, bad weather, poorly treated cancers… In infinitely more formidable proportions than this coronavirus which will have simply benefited from all the diseases of the modern society. And against these, unfortunately, there is neither a vaccine nor a remedy at the moment.