Language to the rescue of a battered collective 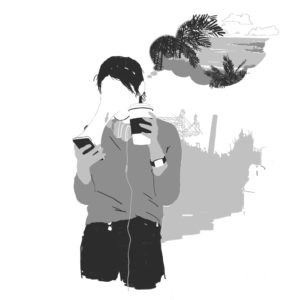 What the development of science and especially the multiple technical applications it has made possible, is the hope that we can cast off the moorings of our human condition. We are talking beings and, whatever the anti-speciesists say, talking is the specific trait of the human species. And this is far from being without consequences: to speak makes that we do not have any more immediate report with the real, we reach this last only through the words. Talking allows us to make present what is not present; but talking forces us to recognize an absence, a negativity, in ourselves. It is on this impossible to evacuate from ourselves — this limit — that we base our possibilities. But today we are so much at the point of sharing the satisfaction of having got rid of everything that is a limit or constraint. In the name of our individuality finally recognized, we want to free ourselves from all that would come to limit us in the name of the collective. But in doing so, it is the collective, the common, that has been pushed aside.

On closer inspection, all this has been actively at work for almost half a century, and we are now — unless we deny it — having to see the effects and consequences, particularly on education. Let’s remember that, in the world of yesterday, a child had almost no say in the matter. He had to wait to grow up, which meant a period of waiting and a distant promise. While waiting for this to happen, it was necessary to make the child accept the rules of good behavior, on the grounds that he would only be able to speak once this work had been accomplished by the family, first, and then by the school. In other words, it was necessary to prepare him for future social life and the institutions that organized it. Everything therefore went hand in hand with an indispensable « bringing to heel » which implied what could be called three great unwritten laws: authority, otherness, anteriority. The authority, because this one was considered from the start as legitimate thing: it is by leaning on it that one could make the child accept that it submits to what requires the fatality to grow. Otherness, because it was self-evident that the others were in a position of foundation and that a debt was owed by each one to society as well as to those of the generation before. The anteriority, because no one imagined that they would not have to worry about the tradition, that is to say, about everything that was there before the arrival of the newcomer, and that had to be transmitted to him.

We will have to accept that the entry into our « new world » has profoundly weakened these three great laws, sometimes to the point of blurring or even extinguishing them. To a growing extent, authority has been questioned, and as a result, devalued, even to the point of gradually losing its legitimacy; it has thus become less and less operative and, little by little, the child has been able to escape what growing up requires. As for otherness, it has been anaemic to the benefit of « meme », of the encounter with only one similar; ceasing to be recognized as what necessarily precedes the construction of each one, it has been seen progressively reduced to a then traumatic encounter, to which the individual, unhappily, always risks having to confront himself. The anteriority, finally — also that of the tradition -, saw itself more and more disaffected; it is consequently all the dimension of the historicity which gave way to the prevalence of the only present — what one called the « presentism » of our time.

These profound changes have meant that adults have fewer and fewer beacons and moorings to object to this typically contemporary conviction: that the individuality of the child — but also of everyone — must find its bloom without hindrance, that its own sensibility is to be supported from the outset, even that it can and even must be self-determined and that, to do this, it is only a matter of surrounding it with love. We behave as if it could spontaneously find its full and happy development, without having to refer to what precedes it, and without having to submit to any conditions to continue to obtain this love. Now, the three laws mentioned above are closely linked to the dissymmetry that characterizes the first relationship of the child to each of his parents, this inequality of roles and especially of « places » that many today would like to see disappear. Only here, whatever happens, in the condition of the beings of language, the dissymmetry and the disparity of the « places » — those of the speaker and the listener to begin with — cannot disappear: they are specific to the human being — they are even, as we have just evoked, the constitutive feature of it.

What kind of world do we live in? The answer is simple: we live in a world that no longer lets us hear what our condition as speaking beings obliges us to. It should not surprise us then that this will only favor the emergence of more and more people who are under-equipped for the language condition and less and less able to find their way in life.