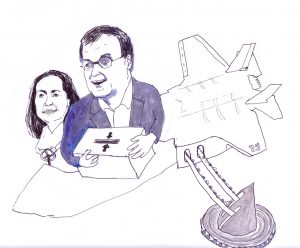 So, we went to the polling stations, here, there and elsewhere; we put our ballots in the ballot box: one to elect our local councillors, the other, our representatives to the Province, thus using our right and the relative privilege of being able to choose, from among those who stood for our votes, the figures best able to meet our personal and collective aspirations. The least we can say is that the result of this election has surprised both patent observers and voters for whom voting, even if it is compulsory, is a serious matter and also presents the opportunity to see, perhaps, things take other turns than those we were forced to endure until now.

As we have seen, the traditional parties — the socialist party, the reform movement and the Christian socialists — have all, in varying proportions depending on the place, lost a few feathers in the adventure, while the ecologists, the PTB and other lists, more or less marked to the left and more modest in terms of their sympathizers and potential voters, have shown themselves to be sometimes spectacularly successful, mainly in the large urban areas. From there, as we have also seen, voices were heard calling for local alliances to overthrow those in place for the past six years, which in many ways had not responded to the expectations of the citizen-voters. At the forefront of these hopes and wishes are a few union leaders of the FGTB — the CSC having remained well away from any post-electoral excesses — , Green leaders and others. They all called for left-wing majorities wherever possible, and there was no shortage of opportunities. And then, here and there, we negotiated the day after a vote that some called historic; and we saw. Ecolos forming an alliance with the MR, socialists renewing the same majorities, cdH in the same way; the  » great wave of the left  » becoming a shiver on the brackish water of small-scale politics.

However, the facts are clear: what a significant number of voters have expressed is, first and foremost, the rejection of the policies pursued at the federal level by the MR and its associates and sponsors of the N‑VA. A policy that is scandalously at the service of the middle and upper classes, who, as we know only too well, proudly escape taxation while pensioners, employees and others  » These resources will be largely used to replace and reinforce the arsenal of our air and land forces, resulting in a debt that will be extinguished in barely two generations. That the punishment of the neo-liberals did not turn out to be even sharper remains unexplained. As much as the one that hit the old socialist party, of an equivalent magnitude, as the party with the rose — increasingly faded — has long pursued a federal policy that differs only slightly from that of the MR. We had the opportunity to smile and laugh here, in the Liège region, at the campaign led by the PS which, from slogans to promises, made the most of the best days of the old POB to the point that, if it had proved to be founded elsewhere than in pure illusion, it promised nothing less than the Revolution in all possible and imaginable fields. As usual, and to quote the famous words of Charles Pasqua or Jacques Chirac,  » Promises are only binding on those who believe them « . And still, many are those, sympathizers and voters of the PS, still lulled by these beautiful flights of fancy, will have attended the ridiculous and stupefying, even villainous campaign of the post-election period, which aimed ignominiously at discrediting the movement of Raoul Hedebouw. This is because the PTB refuses to enter into majorities that would only pursue their objectives when they have obviously been sanctioned by a large part of the electorate. Of course, the riposte, often funny and relevant, was not long in coming, but the maneuver will have fed the no less stupid attempt at demonization led by the blues, which aimed at sowing panic in the most fragile heads by presenting the PTB under the face of the  » and continue to trust us, good people, we will continue our policy for employment («  jobs, jobs, jobs  »), cohesion, social justice and the fight against poverty in our own way, according to Charles Michel and other members of the brotherhood of liars and storytellers who no longer make anyone laugh.

Let’s summarize: change is not for today and it won’t be for tomorrow either. The old political organizations, everywhere, are still managing the immediate. Nowhere is there any awareness that our time is running out, that Nature and all that it encompasses — we humans, all plant and animal species, from insects to fish, from birds to terrestrial and marine mammals — is in a truly unimaginable peril, that this mercantile civilization, the insane project of appropriating all that exists for our sole and distressing profit, all this will collapse in jolts that can only be monstrous. We voted in vain, we will pay for it. And expensive…