It will still be a plot! 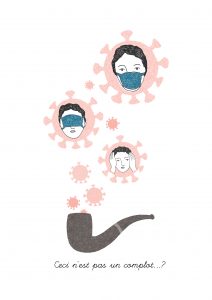 The guardians of the media orthodoxy, who have largely participated in raising the collective anxiety about the epidemic due to the coronavirus, are well annoyed. Bernard Crutzen’s film, Ceci n’est pas un complot (online, free of charge, on https:// www.youtube.com/watch?v=HH_JWgJXxLM), interviews moderate people from different sides, does not launch into risky hypotheses, relays proven facts (these are mostly productions of the major Belgian media). Those who felt challenged were therefore forced to look for the small beast in what would be the hidden intentions of the director. Let’s take a close look at the sometimes surprising reactions of the media that we dared to question about their treatment of the SARS-CoV-19 epidemic.

DISTURBING, BECAUSE IT PUTS THE FINGER WHERE IT HURTS?

Let’s start with the zero degree of political analysis: Caroline Lallemand, journalist at Le Vif reacts on the spot (February 8) and begins her article with  » a Belgian documentary with a hold-up sauce « . How can we dare to put on the same footing the pamphlet made by libertarians who use every possible means to criticize the States (wishing to see them weakened in order to advance their dream: more and more power ceded to a world government driven by multinationals) and the film by a progressive who questions the reason for the single thought that we see in most of the media? The title of a second article, the next day, does not hide the peremptory negative judgment: « A poison made with talent »(1).

Arnaud Ruyssen, a journalist at RTBF, who has been known to be more inspired, says he has decoded the documentary and considers that it presents the media  » as manipulators complicit in the advent of an authoritarian regime. Thesis that the conspiracy theorists take up again, arguing that the Covid-19 is a means to set up a society of control, liberticide. « He also considers that the video  » completely downplays the heart of the problem with this epidemic… namely the potential to blow up our hospital system.  » Did he see the same film we did? Indeed, these two statements do not correspond to the reality of the film, but allow it to bring out the joker word: « conspiracy ». One can think that, in a certain way, the journalist translates this feeling of great responsibility («  Can we sweep away 20,000 deaths with a wave of the hand? by reducing them to the fact that they represent « only » 0.17% of the Belgian population? « The messages delivered had to strongly encourage listeners to strictly observe all the rules laid down by the public authorities. Disappointed by the RTBF journalist’s « skin-deep » reaction, Kairos invites him to a debate with Bernard Crutzen.(2) Alas, the TV commentator will refuse, although like many others, he insisted on the interest of having contradictory exchanges and a broad debate on the way the media has acted in recent months around Covid. Only the regional television station BX1 organized a debate with Bernard Crutzen(3), but with such an imbalance in the place given to the various speakers that the director felt trapped, « like a bull entering the arena of a bullfight .

It is impossible to list here all the reactions of the mainstream media, but they were often along the lines of  » It’s not a conspiracy, but … » (Dorian de Meeus, editor of La Libre, February 12). (Dorian de Meeus, editor of La Libre, February 12). L’Avenir will headline that the documentary  » is an oriented film « . In fact, Crutzen did not hide the fact that he was shocked by the media treatment of the pandemic, which he felt was a  » bludgeoning « (4) (but this is a feeling clearly shared by the majority of the population), the real question being:  » Is it justified or not ? It was the people interviewed by Crutzen who used the words  » propaganda « ,  » consent factory « ,  » sacrificing freedom of thought « .

We will only note for the anecdote the comments on the quality of the documentary, the choice of interlocutors and screen captures, the use of techniques that are essential for a good video, the position of the director («  Crutzen’s position is not clear, he is not a journalist, he is an author. What bothers me deeply is that the public confuses the position of an author with that of a journalist…  »). All these arguments avoid having to answer the central question:  » But why this unanimity in sending messages that has had the effect of distilling a very great anxiety in the majority of the population?  »

With a bit of hindsight, we can see that the film, completed at the end of December 2020 and made public on February 6, was the first to make observations and to launch, in a document supported by facts and testimonies, questions that are now being taken up and developed in many media. In the interview with Bernard Crutzen that Kairos published on its website(5) at the beginning of March, the director also senses a « tremor » in several editorial offices. Of course, it is never easy to recognize in a short period of time that one has made a mistake, but since mid-February one feels that the very strong unanimity behind the media-government’s single thought is cracking little by little. Thus, Le Soir devoted two pages to the analysis of the film, but had the skill to have outsiders speak (so as not to contradict themselves?):  » There are about ten of them who agreed to talk to us about Ceci n’est pas un complot, Bernard Crutzen’s documentary. A film that marked them. « This has allowed the newspaper to juxtapose unfavorable opinions, but also comments that join and sometimes amplify criticisms of the media world’s handling of the epidemic. From the Feb. 27 article: « It’s outrageous how Wilmès packed up the guy from the Kairos news site ‚ » Kris raged. « It reminds me of Orban’s Hungary. » The mainstream press , the one that can be frequented, would forget the essential : « It is a pity that it no longer relays issues such as poverty or solidarity », Julie believes. « (6)

Bernard Crutzen’s documentary has brought to the surface facts that are strangely hidden by most media. One thinks of this video in which Marc Van Ranst explains to an elite audience how he manipulated the media during the H1N1 flu crisis. The video(7) appeared on Kairos on December 15, 2020, an excerpt of it was picked up by This Is Not a Conspiracy , and since then it’s been making its way up in some newsrooms. This question of conflicts of interest earned the almost generalized opprobrium of the profession when Alexandre Penasse dared to ask Sophie Wilmès the question. However, this is the ABC of being a journalist and this concern about conflicts of interest was hardly noticed when the epidemiologist Yves Coppieters clearly denounced it in his report to Parliament.(8)

The indignant reactions of some media to the questioning of This Is Not a Conspiracy are perhaps justified by the fact that they feel accused of being part of a « grand conspiracy ». If such theories exist (see the followers of the « Great Reset » theory(9)), what Crutzen’s film reveals is not complicity in a vast conspiracy but rather sheep-like behavior, sometimes even « well-intentioned » at the outset, but which leads to an overall negative result.

We can cite as causes of a discourse unanimously generating fears:

- A certain sense of responsibility (or obedience?) that pushes one to relay, without much critical distance, the injunctions of the authorities. This aspect is strongly correlated with the very conservative and power-oriented positioning of most of the major media’s editorial offices.

- A naive belief in Science, with a capital letter, without realizing that if there is a scientific method, if there is a scientific corpus which is elaborated over decades, there are also many scientists who are advocates of private interests and that the strategy of the sowers of doubt has been perfected on other files (tobacco, asbestos, pesticides, climate change…)

- The bias induced by the « entre-soi »: in most environments, we only exchange with people who look like us, who think like us. This is even truer for teams of virologists who are self-convinced that the only priority must be the eradication of the virus.

- The focus on the health aspects of the crisis, without taking into account the social, economic, psychological and political components of the decisions.

- The lack of knowledge of The Shock Strategy(10) which allows the powerful to take advantage of chaotic situations to advance their neo-conservative agenda.

- Many journalists seem to have little awareness of the biases that explain their univocal readings, oriented in a hygienic sense and, until recently, uncritical of measures that deprive freedom, even drifting towards an authoritarian logic.

This is not a conspiracy is certainly not conspiratorial in the sense that it would have us believe that the majority of journalists are complicit in a vaguely secret political project. The video is not only aimed at the general public, but also at those who « make the information », hoping to convince them that it would be in their interest to be less docile and to act in the direction of the concluding sentence of Bernard Crutzen’s film:  » In a democracy, shouldn’t the press be the first line of defence against the abuses of power? In this crisis, on the contrary, it seems to accompany the power, even in its delirium « .

On February 6, Bernard Crutzen made his film public, offering it for viewing on the community website Vimeo(11), which allows the sharing of videos made by users. 17 days later, on February 23, when the film had been seen more than 600,000 times, Bernard Crutzen received the following message:  » Your account has been deleted by the Vimeo team for violating our guidelines. The reason is that you can’t post videos staging or encouraging self-harm, falsely claiming large-scale disasters are hoaxes, and making false or misleading claims about vaccine safety « . No response to requests to know where they had found such unauthorized claims. Obviously, asking questions about these sensitive topics is not allowed. Vimeo only wished  » good luck finding a platform to host your videos « . In fact, Crutzen had foreseen this and thanks to uploads on Youtube and « pirate » copies we are at 1.530.000 views. But we can share the director’s concerns:  » Blatant proof that the Internet giants are setting themselves up as censors? That they decide what can be said or not said? That questioning the vaccination is forbidden?  »