Island of resistance on the Picardy coast 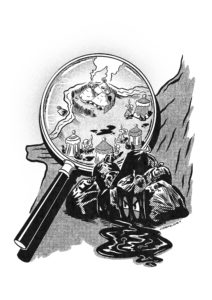 It’s a charming village, half of which is populated by Picards and the other half by seasonal workers. The latter have had ties there for years and the Belgians are there in large numbers. The signatories of this document are part of it.

Since the March 2020 municipal elections, a new majority has been elected with a large majority of votes and a high voter turnout, over 70%. This first sign of originality contrasts with the results obtained on the run in most of the French communes where the elections were marked by a record abstention.

This majority has placed a new mayor at its head and defends within a non-aligned political association a very dynamic approach with ecological and social values.

The mayor and his team are following a long period of stagnation and disengagement with a majority that, for two terms, anaesthetized the lifeblood of this former fishing port, once important, whose tide gauge transported fish directly to Paris.

Following the decline of fishing, the city became a seaside resort very popular with the « good society », with its casinos and its large hotel.

The First and Second World Wars (with their 4 years of German military occupation) took their toll on this flourishing tourist haven. However, there is still a small and developed industry of locksmithing, canning, taps, foundry and flasks.

The municipality is managed by the Communist Party since the post-war period until the fall of the USSR. This long period of time allowed for the establishment of important social gains, the effects of which are still noticeable today.

As everywhere, the delocalization of industrial production has weakened the small local industry, which nevertheless survives by employing a significant number of workers and craftsmen.

The incongruous management choices made by the previous majority have deepened the decline of the town. Taking as a pretext the natural crumbling and retreat of the cliffs on the seashore (the town is located precisely at the beginning of the cliffs that extend to Étretat), the municipality had decided to invest in a real estate and commercial project at a distance from the coast, to the detriment of the seaside vocation and the historic heart of the town, where abandonment was reflected in a large number of signs of houses for sale and the deterioration of public facilities. The population and the merchants oscillated between discontent and despair, governed as they were by a municipality deaf to their demands and having chosen to indulge in a real estate and commercial project far removed from the social needs and character of the city.

The new municipal team took the reins in the midst of a pandemic and containment. Refusing to be contaminated by the ambient climate of fear and individual withdrawal, it has promoted, without waiting, a policy of opening up public space by reinvesting the neglected center, and especially of opening up minds through multiple popular events and cultural activities adapted to the diverse sociology of the population.

In so doing, the mayor and his team are gently assuming a form of institutionalized civil disobedience to official injunctions on covid behavior that seem more counterproductive than useful, in that they instill isolation and gloom.

In this way, they are respecting the commitments expressed at the time of their investiture, the effects of which are already visible with the revival and opening of new local businesses and the disappearance of signs for houses for sale.

This policy of openness gives pride of place to a range of activities in which novelties rub shoulders with the revival of traditions. The whole is deployed in symbiosis with the particularities of a territory regrouping three sites of a rich urbanistic diversity

and cultural, from the old fishing port to the district of the beautiful 1900’s villas, passing by the 14th century church classified « in the middle of the village ».

Markets, which have existed for centuries, continued during the pandemic, as did the flea markets and craft markets that attract large numbers of local and seasonal people.

Street animations, some of them organized by shopkeepers with the support of the municipality, flourish in the historical center: song recitals (sometimes in Picardy language), wood carving workshop, without forgetting in summer the popular ball on Saturday evening.

In general, the municipality is careful to grant free access to many activities in order to preserve the social mix.

An associative life has also invested the city. The town hall took the opportunity to recycle the old school closed by the previous majority into a House of Associations. The Little Museum was born from the combined efforts of a photographer and a local historian and offers an interesting look at the past with its archive collection. The listed church, mentioned above, is also the object of an Association of Friends of the Belfry which works to enhance its value and to defend the urgency of undertaking repair work. It must be said that with its ecclesiastical belfry (civil building attached to a religious building) it has only two other examples in all of France. The roadway is being redesigned to create a large pedestrian area around the church. The beaches with their typical pebbles are the object of the attention of the city council which has installed new cabins and reading corners.

Another challenge for this municipal team is that it has not had much time to relax since its election a year ago.

The mayor invited those present to visit the construction site of the future cultural center. Inherited from the previous majority, the voluminous infrastructure is the result of often contradictory ambitions that have given birth to an unwieldy hybrid with a somewhat pharaonic cost. Trying to reframe the directives of a « pretentious Parisian » architect and the control of a cacique who had led the city in a procession of lavish spending, the new mayor is working to give relevance to this enterprise, including installing a cinema whose ability to bring people together is no longer in question.

The path will not be a straight line, but the political will may well overcome all these shortcomings.

Back home after a long absence imposed by the pandemic, we could observe that, in the streets paved with small flags fluttering in the wind often present in these regions, faces were smiling and that the « tide washed away the sadness and the sinister ».