Is Covid-19 a dystopian virus? 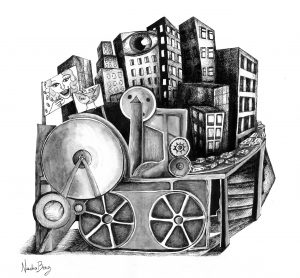 Novlangue, thought police, absolute transparency, thought crime, rewriting the past, generalized surveillance (or  » tracing  »), « citizen » denunciations: so many terms borrowed from the Orwellian vocabulary, which strangely echo a reality that has become, unfortunately, our daily life. Has the  » common decency  » dear to the author of 1984 definitively deserted our societies hypnotized by a hypothetical « zero risk » health security? In short, with the emergence and entrenchment of Covid-19, has our reality become dystopian or, more precisely, has dystopia become our new normal? But perhaps we should go back to the sources of this now overused term to try to see it more clearly…

Utopias are much more feasible than we thought. Today, we are confronted with a new question that has become urgent: how can we avoid the final realization of utopias? Utopias are feasible. Life walks towards utopias. It is probably not by chance that Aldous Huxley placed this sentence of the Russian philosopher Nicolas Berdiaev at the beginning of his Brave New World. Contrary to what is often believed, dystopia is not the opposite of utopia, or even a utopia that has « gone wrong(1) « . Let’s shift the spotlight and imagine, on the contrary, that the dystopia is the utopia finally realized, with the technological, scientific and psychological means (in particular mass psychology) of the 20th and 21st centuries.

Let’s continue thinking and imagine that our goal is to create a « perfect » and « scientifically based » dystopian society. How do I go about it? Wouldn’t a first « good idea » be to marginalize and, if possible, to silence artists and more generally cultural actors, those eternal dreamers, those ferments of potential contestation of the perfect system we call for? The circulation of a nasty virus and, beyond that, Plato himself, in The Republic, are holding out the gauntlet. In his description of the Ideal City, this « dystopian » utopia before the letter, since these two terms are less antinomic than they seem, the Athenian philosopher already advocated the banishment of poets and poetry, those seeds of irrationality that distort and contaminate the public mind and make bad citizens, that is to say those who do not obey the Guardians, members of the upper caste. Indeed, in the Platonic classification, democracy is the worst of the regimes, except, not all the others, as Churchill said, but only tyranny. Why? Because, according to Plato, in a democracy, all energy is no longer directed towards the public good (as defined by the upper caste) and citizens indulge in unnecessary or, to put it better, non-essential activities and pleasures(2).

SCIENCE AND TECHNOLOGY AS UNSURPASSABLE ABSOLUTES

If there is one figure that will remain prominent in this Covid-19 crisis, it is undoubtedly that of the expert, in particular the virologists, to whose advice the politicians have generally chosen to bow. Of course, it is understandable that, faced with an epidemic that no one had anticipated (except perhaps certain authors of dystopias, see below), the political sphere and even more so the media turn to those who are supposed to have scientific knowledge. But some people seem to have forgotten that, far from being a hypostasized Platonic idea, science is above all the product of human activity, likely to proceed by trial and error, and which therefore does not exclude from the outset all debate(3). The whole history of science shows that it is an evolutionary process, which is never fixed once and for all.

In his novel We, Yevgeny Zamiatin (1920), an early Russian revolutionary disappointed by the totalitarian excesses of the Bolshevik regime, describes a dystopian society that is hyper-rational and sanitary and where science and technology are almost erected as new religions. This fiction, which strongly influenced Orwell in the writing of his 1984, introduces us to D‑503, an engineer (like the author himself) of the Unitary State, a kind of globalized Leviathan State established after a 200-year war between cities and countryside. Under the supposedly benevolent leadership of a mysterious Benefactor, the inhabitants, who all have a number instead of a name, live a perfectly monotonous life, sleeping, eating and working at the same hours. All activities, including sexual ones, are strictly regulated. The protagonist keeps a diary that is objective, rational, scientific and transparent, like the main watchwords of the society described by Zamiatin:  » Wasn’t it absurd that the state… left sexual life unchecked? With whom, when and as much as you want… Absolutely ascientific, downright bestial. (…) The Science of the Unitary State affirms that the life of the ancients was indeed this, and the Science of the Unitary State is never wrong. And what governmental logic could there be when people lived in the state of freedom, that is, that of beasts, monkeys, cattle? (4) « .

» Freedom is slavery  » was one of the slogans of the Big Brother world. With social distancing, barrier gestures, curfew times, tracking systems to be downloaded on our mobiles, in
Is trading our freedoms for a very hypothetical health security not exactly the way we are going? The Chinese social credit system is rightly criticized, where the good students of the regime are rewarded while the bad ones suffer bullying and various restrictions. But aren’t we going in precisely the same direction by introducing the already famous vaccination passport, rewarding docile and obedient citizens who will be able to travel, go to restaurants or practice a particular sport or cultural activity, and punishing rebels and refusers, who are excluded from these possibilities and placed under de facto house arrest?

Increasingly, health databases are becoming a business issue. In its contracts with certain states (notably Israel and the United Kingdom), Pfizer has allegedly negotiated the handover of citizens’ medical data in exchange for accelerated delivery of the vaccine. In Belgium, the  » putting data at the center  » project to cross-reference health, tax and social data has also caused a stir. The economic and democratic stakes of such crossings are enormous. When Big Data meets Big Pharma, Big Brother is not far away.

In this premonitory novel, pollution has accelerated and the planetary climate has been transformed as a result of an uncontrolled increase in CO2 emissions and the massive use of chemical products, particularly in agriculture. The Mediterranean is so polluted that swimming is forbidden and all the fish are dead. In Europe, famines, droughts and epidemics reign repeatedly. In most places, wearing a mask at all times has become mandatory and pure oxygen is sold for 25 cents a liter. In the United States, the situation is not much better: New York suffers from acid rain, industrial and intensive agriculture, with massive use of pesticides and insecticides, has led to a drastic decline in biodiversity. Antibiotics, massively present in the food chain, are less efficient and opportunistic bacteria appear. Not bad for this novel written in 1972!

In this sick society (in every sense of the word), small autonomous communities, led by a certain Austin Train, try to survive and resist the large conglomerates that take advantage of the situation… Following the disappearance of Austin Train, a journalist sensitive to environmental issues begins an investigation that will put her on the trail of a large agro-pharmaceutical group, responsible for a huge poisoning scandal in Africa. Any resemblance…

In this mortifying context, and following the example of what happens in our reality, Brunner develops a striking picture of the mental and psychic pathologies affecting this deranged society. Almost everyone is hooked on anti-anxiety drugs and one character even dies from inadvertently eating chocolate while on antidepressant medication. A touch of humor in this hopeless universe…

Explosion of psychological malaise, increasing suicidal tendencies, disarray of an entire youth, sacrificed or even shattered on the altar of a health obsession that seems to drive out any other consideration. In December 2020, Sciensano published some rather alarming figures, showing a clear deterioration of the mental health of Belgians. Among those 18 and over, 64% say they are dissatisfied with their social contacts. In June 2020, 22% of the population reported anxiety and depressive disorders, dropping to 16% during the summer (decontamination period) and rising again to 22% in December 2020. More than 70% of the people surveyed complain of sleep disorders. The groups most affected by these phenomena are 18–24 year olds, single people with or without children, and people on social welfare and the vulnerable(5).

If these trends continue, we may one day arrive at a type of society comparable to that imagined by the famous science fiction writer Philip K. Dick in The Clans of the Alphane Moon. In this 1964 novel, the author of Blade Runner imagines, in the form of a moon independent of the Earth, an autarkic society populated and directed by people suffering from various mental disorders. According to my theory, » says one of the protagonists, « thehe various subcategories of mental disorder must be divided here into distinct classes, much like the caste system of ancient India. (…) Maniacs must form the caste of fearless warriors. (…) Paranoid people must constitute the ruling class. (…) The simple schizophrenics would correspond to the category of poets, although some of them are undoubtedly religious visionaries. The neurotics of the obsessive-compulsive type must be the clerks and office workers of this society, the civil servants without original ideas(6) « .

The lesson of the novel is that this « crazy » society is ultimately no worse, and perhaps even a little better, than the supposedly sane society on earth. Dick’s satirical intention, which is on the side of Voltaire and Swift, is obvious and it seems obvious that he holds up a (barely) distorting mirror to the America of the 1960s.

On a much less ironic note, the very real increase in mental disorders and the consumption of antidepressants leads us instead to Aldous Huxley’s Brave New World , where Soma, a synthetic drug in free use, offers an illusory and temporary escape to the conditioned inhabitants of the globalized state…

MAINSTREAM MEDIA IN A STATE OF CRITICAL ANOSMIA

The goal of mainstream journalism seems to be no longer to ask questions, to question a complex reality, to exercise one’s critical sense, but on the contrary to induce in the interlocutor answers, preferably pre-formatted, obeying a binary logic and responding to the dominant « narrative ». At the forefront of this new look journalism, the arsenal of ready-made formulas, of foolproof clichés that, curiously, nobody or almost nobody thinks of questioning. It is, for example, the now famous antiphon  » The most serious health crisis the world has seen in a century « . In passing, we forget the Asian flu of 1957 and the Hong Kong flu of 1968–1969 which, in total, caused more than 3 million victims worldwide.

While today, the Covid-19 obliterates entire sections of the news, which simply do not seem to exist anymore, the press of the time largely devoted its columns to the post-May 68 social conflicts, to the Vietnam war or to the future Apollo mission to the moon.

On a deeper sociological level, perhaps we should also see in this evolution of media treatment a change in attitude towards death. In the past, it was an integral part of life. One died at home, surrounded by family and friends, and the rituals accompanying the mourning maintained a link. Today, we are more in a « dystopian » perspective, where death has become something obscene that must be evacuated at all costs in closed and anonymous centers, mourning itself having become impossible, a bit like what happens in the film Green Sun by Richard Fleischer, another surprisingly current dystopia. An evolution that the historian Philippe Ariès underlines well:  » Death was once a familiar figure, and moralists had to make it hideous to scare people. Today, just naming it is enough to cause an emotional tension incompatible with the regularity of daily life(9).  »