In this question, no word is taken for granted 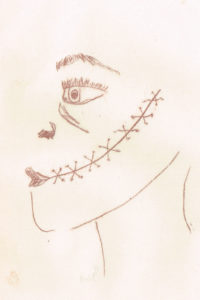 « World » for example. This is the term that the Latins had chosen to express the Greek idea of cosmos. There is cosmos when there is harmony, when a plurality of elements form a unity. To ask ourselves in which « world » we live, is therefore to lend a lot to our social and political situation. Where is the unity when, in the relationship of man to nature and to other humans, the divorce seems consummated? By its antibacterial virtues and its frenetic use, the hydro-alcoholic gel says something about our vain hope to build an empire within an empire, a zone of prophylaxis in the ample bosom of nature. The sanitary mask, on the other hand, symbolizes the only thing that still brings us together: the « good reflexes » of « social distancing ». « All united against the virus » — and all agreed to reduce the organ of speech to an orifice from which it could emerge.

In what world… ? The preposition « in » is therefore even problematic: are we in this world if it is no longer a world? Do we share the terrace of a café when we had to reserve our place? Do we still get into a bar if we have to show a pass to do so? Is there still a church when only those with a QR-code could get through the church door? A world worthy of the name is a place of welcome. Hence the expression « bringing a child into the world ». The birth rate drops. We are quick to relativize: « That’s how it is in wartime, and then it bounces back. » But the funny world war we have entered, if we win it one day, it will be by staying at home, on our couch. You don’t bring a child into the world with the promise, at best, of domestic comfort.

There is nothing, up to the verb of our question, that is not a problem. Our life has suddenly stopped where the other’s begins. Because of a virus which, without being anything, is not the black plague or cholera, we have seen each other only by apologizing for seeing each other, if we did not prefer to run away from each other for fear of catching from the other what he was afraid to contract because of us. This is not living. It is not even

not survive. By prohibiting visits to women and men at the end of life, we have, with our eyes fixed on the numbers, preferred life expectancy to the expectancy that makes life possible. By attacking the relationship, by making it guilty, we were protecting life at the expense of what gives it meaning and flavor.

In our question, even « in 2021(1) » can be problematized. Because we are now living in the covid-19, at its rhythm, under its influence. As there are variants of the virus, the years following 2019 look like variations of the same theme. A film based on a novel is said to be  » based on the work of… ». The famous « world after » is only « the world after covid-19″. This is the world of the disfigurement of the human face by the sanitary mask and its upcoming reconfiguration in facial recognition. The American President warned us:  » Vaxxed or masked « . We will only recover our common life if we agree to extend the external immunity (the sanitary mask) by the internal immunity (the vaccine). In both cases, we will, willingly or not, be protected from each other.

So nothing is self-evident in this question. If not, maybe the little word « we ». A term that Heidegger, in §27 ofBeing and Time, had tried to make us understand: the « on »(das Man) is the subjugated subject, the name of the anonymous, the transversal wave of the « on-sayings » or of the « qu’en-dira-t-on ». « The « we » is opposed to the « we » as well as to the « I »: it expresses the urban reign of interchangeability, indifference and indifferentiation. The « we » is faceless. For the human face is situated at the intersection of the « I » and the « we ». On the one hand, this face makes me absolutely unique. On the other hand, it is the only part of my body that, when I talk to you, you see and I do not. My face is first addressed to you, offered to you, entrusted to you. What we have of cleanest is thus what we cannot retain to ourselves. We are « I’s » by the grace of a « we ». We only have a face through each other.

The uncovered face was the symbol of the pact of conviviality and trust that bound us. Today, it is a question of reclaiming it over our fears. For if we do not live in this world, we will live to try another and to care, from now on, for the interstices through which something like a human, relational life slips through.