Gorged on dessert, deprived of desire 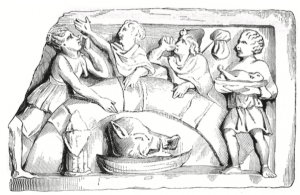 For the past year, the whole of humanity has been under the same constraint. In France, in Belgium, in Europe, in the Mediterranean… the taste and the meaning of life have disappeared. Our cultures are being challenged, and it is difficult to develop a desirable future. So if culture,  » is to be what you are, and not to be what others want you to be(1) « We can search our history for what defines us, or what is a deception, and also understand what connects all of us humans, beyond our cultural differences.

Finally deconditioned for Christmas, stuffed with luxurious meals and papillotes on sale, we finished towards the end of January, with a pasty mouth, our umpteenth cake. We do not lack sugar, chocolate, sweets… in our infantilizing western empire, an empire  » without conscience(2) « . Our basic needs are mostly met — physiology, security, belonging — but our elaborate needs are thwarted: recognition, self-actualization, mission. It’s hard to want a future, to study, to find a job, to find a partner, to maintain your network of friends… It is difficult to make plans, especially for vacations or travel. And it is very difficult to desire authentic achievements, when advertisers are responsible for cutting the desire under our feet. So we fall back on what our civilized society offers us: impulsive desire and its immediate satisfaction. A movie or a series on N‑x, a cheap electronic gadget on A‑n, a click on the extravagant suggestions of YouTube, which gradually lock you in a so-called « conspiracy bubble ». Envy does not respond to a real need, it does not correspond to individual needs, but rather to the needs of the economy: to artificially create outlets.

PRISONERS OF THE ECONOMY

And we find ourselves imprisoned in our homes, working during the day, and feeding images at night. To distract us, to entertain us… while forgetting to cultivate us, in the sense of « rubbing shoulders with the arts ». And by dint of consuming mostly American series, we are losing our culture. France is not America, and I would say, joining the archaeologist JeanPaul Savignac:  » Shit to Caesar(3) « , i.e. shit to GAFA, shit to Trump, shit to Bush father and son, shit to Reagan, etc. Since the age of the virus, we discover a new feeling, something like a « loss of meaning », a loss that is not new. And our gaze is opened to the world, which is cruelly realistic: it is an economic tyranny. We are  » slaves of the economy »(4) . And ironically, it is this economy that is the cause of our confinement, through zoonosis (a viral transmission from an animal species to humans), by destroying natural territories that drive out animals and spread new viruses (AIDS, Ebola, SARS, Covid-19…). This tyranny of the economy is not new(5); what is new is our awareness. We are beginning to understand that the economy is always a tyranny, and that there is also something tyrannical in us, since we have been responsible for the destruction of life for thousands of years(6). Humanity has lived in error for a long time, and we are now seeing the consequences. As the archaeologist Jacques Bouineau says(7):  » The 20th century killed the human being. The challenge of the 21st century is to rebuild it(8).  »

REBUILD THE HUMAN BEING

Rebuild… yes, but how? By working on oneself, and working on the other. As Alejandro Jodorowsky rightly says,  » culture is being what you are, and not being what others want you to be . « For example, by listening to contemporary archaeology, which allows us to question our origins on both sides of the Mediterranean, and to bring a new look resulting from the most recent evolutions of this science, on the reciprocal contributions between Celts and Romans, peoples whose languages and cultures were already close at the time of the conquest of Gaul by Caius Iulius Caesar (Julius Caesar). The whole Mediterranean has lived under the same political regime for several centuries, and even if 1,500 years separate us from the Roman Empire, there must still be something in common, from Marseille to Alexandria, from Algiers to Istanbul, from Brest to Damascus. Christians, Hebrews and Arabs were inspired by a common alphabet, the Phoenician alphabet(9), each letter of which corresponded to the sound and design of a common object. For example, the letter L representing a stick(Lāmedh), the Y representing a hand(Yōdh), or the M representing snaking water(Mēm). The Romans left us the calendar, accounting and law. And if our culture is essentially Latin (French derives from Baslatin), the question we can ask ourselves is:  » What remains of Celtic in us?  » If the ant in the fable is rather Roman, the cicada would be rather Gallic. Rabelais represents well the truculence, the love of life and the pleasures of the flesh, attributed to the Gauls. The sauciness, the humor, but also the imagination, the romanticism, the esotericism, the neo-shamanism… André Breton and surrealism, Art Nouveau and the school of Nancy, inspired by nature and the curved line… and also Belgium (and its vivifying humor) which was in its time one of the provinces of Gaul defined by Caesar. But the other side of the coin is also the fascist and Petainist rereading of the past, seeking to justify colonialism and collaboration(10) by a hypothetical superiority of Germany (industrial and civilized in the Roman manner) over a weak, artisanal, agricultural, cosmopolitan and ungovernable France (like the allegedly undisciplined Gauls divided into a hundred tribes).

It is the same opposition that one finds more or less between Dreyfusards and anti-Dreyfusards, between Communards and Versaillais, between anti-maskers and pro-maskers, between partisans of Justice and partisans of Order. Between those who love life and the risk that life takes, and those who hate the living and wish to take the others with them into the void. And here is that our world is subjected to an unjust order, which prefers tangible signs (you wear the mask… or not), which prefers to submit individuals by the fear of the policeman, and to check their propensity to submit. We can qualify the barrier gestures and the generalized wearing of masks, imposed on children, as a set of abusive measures, because they are disproportionate and unfounded (far from the WHO recommendations). And this abuse signs the perversity of our political and media systems.

The technologies imposed by the technocracy are also abusive and intrusive. In the past, the Warsaw Ghetto was counted using IBM punch card machines; today, the masses are manipulated remotely. One Saturday, at nap time, I received a text message from Social Security a few hours after being diagnosed. This SMS tells me that I will be contacted by phone soon. Where is my free will? Where is my autonomy? Social Security doesn’t care about any of that. It is obsessed with the quest for real-time traceability, so that it can trace the chain of contamination and identify all potential suspects. It was easier for me to fight the virus than to find a doctor « accepting new patients » on Doctolib, and able to issue me a work stoppage. It turned out to be easier to treat myself, and survive, than to understand the administrative intricacies of the « health care pathway » in Covid times. Seven days later, I received a text message telling me that I was cured. Thanks to the Sécu. Thank you Big Brother, we are in the middle of a dystopia.

Basically, in this case, the question that this virus raises is our immunity. The first form of spring 2019 was much more formidable than the current forms. After declaring an inflammation, the virus would go dormant and trigger a cytokine shock, severely disrupting vital organs (kidneys, lungs, heart), and causing certain death. Our western immunity is certainly declining (think of the amount of autoimmune diseases that have appeared in the last few decades), but the virus is not new (Spanish flu, SARS, H1N1, bird flu). Do political abuse and technological intrusion contribute to the decline in immunity? Certainly, by the stress they generate. Good immunity is present in individuals who protect themselves from stress, and maintain family and social harmony. This immunity is present in those who protect themselves from Progress and its batch of deadly horrors: pesticides, fungicides, flavors, sweeteners, xeno-estrogens, heavy metals, relay antennas, Wi-Fi… I recently discovered how to disable Wi-Fi at home(public Wi-Fialways on, and private Wi-Fi off at night(11)), so that’s always a plus.

In conclusion, immunity is present in those who testify to a  » dazzling health, a jubilation of being, an expansive enchantment … », the qualities that Jean-Paul Savignac attributes to the Gauls by studying their art and their fragmentary texts. These are qualities that we lack today, that we would do well to learn from, and that I warmly wish to our readers.