EXCESS VERSUS THE COMMON GOOD 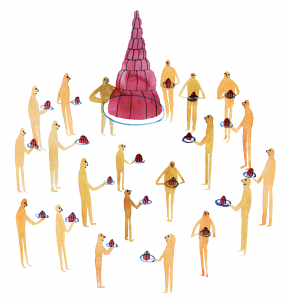 Reference to the virtues of small and medium-sized enterprises appears more and more often in the speeches of decision-makers in view of the advantages they offer in terms of employment and territorial roots. The consideration of the human dimension in political and economic choices is also widely praised, without forgetting the antiphon of sustainable development. However, recent events show that the achievements and concrete projects celebrated by politicians and the general press are hardly inspired by these beautiful considerations.

You have probably learned recently, on May 12, that theHarmony of the Seas has just been delivered with great pomp and circumstance to its sponsor, the American company Royal Caribbean Cruise Line, by the STX France shipyards in Saint-Nazaire. TheHarmony of the Seas is the largest cruise ship in the world and, as such, is hailed with great pride by the French press as a jewel of national know-how.

It is true that this liner can accommodate 6 296 passengers with a crew of 2384 members. It offers its clientele, for its Caribbean or Mediterranean cruises, a multitude of services and leisure activities: 25 restaurants, 4 swimming pools, 2 climbing walls, 3 water slides, 2 theaters, 1 ice rink, 1 nature park (!), 1 miniature golf course and a series of other entertainments for compulsive consumers of leisure activities of all kinds. Its cost is close to 900 million euros. With the prospects evoked for the cruise market (according to specialists in the sector, 24 million people should embark in 2016 to sail the seas of this world), this pharaonic expenditure is expected to be profitable after a few years of operation.

The luxury cruise market is said to have a great future. The cruise ship owner MSC Cruises (the world’s second largest container shipping company), convinced by French know-how, announced on April 6, during a reception at the Élysée Palace, in the presence of the (Socialist) President François Hollande, that it had ordered four cruise ships from the Saint-Nazaire shipyard (a contract worth 4 billion euros). It should be recalled here that the French state has held since 2008, 33.4% of the shipyard, against 66.6% belonging to the Korean group STX Shiftbuilding.

Thus, the French government will be able to take pride in making an important contribution to a large-scale social project: democratizing luxury vacations (in the words of the director of MSC cruises). The compatibility of this type of ship with the protection of the coastal ecosystems intended to accommodate them is obviously not commented on, nor is the flag of convenience of the Bahamas, which makes it possible to undercut prices by exploiting the crew and avoiding taxes.

To those who would insinuate that excessiveness characterizes our French neighbors and would not reach us, I propose to them to look at a very charming Belgian project: the project of chicken breeding in the village of Othée, near Liege. It is about building an industrial henhouse of 39 600 chickens. You read 39,600, not 40,000; this is important because the 40,000 threshold requires an impact study. This type of breeding (it is more correct to say meat factory) where each animal has a comfortable space of a few dm2 to stretch its legs has everything to please: air pollution, water pollution, soil pollution… poor quality of the flesh of these unfortunate animals. Not to mention the most serious point: the massive use of antibiotics and coccidiostats(1) which makes these factories the ideal breeding ground for the development of multi-resistant bacteria and thus seriously threatens public health.

It remains for me to point out that the « future » operator clearly envisages an extension in the long term of the said « breeding ». As excess by definition abhors limits, the objective of 120,000 chickens has already been mentioned.

But excess is not, as some people believe, the only fact of an unbridled and irresponsible capitalism, supported by complicit politicians. It is also very much in the minds of politicians looking for prestigious achievements or simply convinced by the arguments of economists in court.

The project of the mega-prison of Haren, north of Brussels, is a striking illustration of this syndrome (see on this subject the file n°19 of Kairos: « against the prison of Haren and all modern prisons »). How else can we explain the stubbornness of the Belgian state in this project to build, in partnership with a consortium of private companies (Cafasso), the largest prison in the country?

The transportation sector has been one of the most controversial areas of public policy for many years. The SNCB, put under financial pressure according to a questionable profitability logic, is finding it increasingly difficult to provide the correct service that users are entitled to expect.

However, at the same time, colossal sums of money have been spent on a policy for large stations that, to say the least, does not address the concerns of users. In Liege, a station whose architectural aesthetics have been unanimously praised is proving to be very uncomfortable for daily users, while it has been a financial drain for the SNCB.

But the most questionable and most contested project is that of the Mons train station, a project of unprecedented scope at an estimated cost of over 250 million euros. It should be remembered that the initial budget (2006) was 37 million euros. To speak of gigantism in this regard is legitimate. At the very least, it can be said that this is a project out of proportion. When you see the state of disrepair and even abandonment in which most of the stations in the Walloon network are, there is reason to be indignant.

The different cases of manifest excess that have been highlighted have common characteristics. None of them are designed to serve the public; none of them are designed with long-term sustainability in mind. It is to be expected that each of these projects will have enormous difficulties in the near future to meet the objectives for which they were (badly) conceived. The other common characteristic is their public financing, either total or partial.

The construction of giant liners could not take place in St Nazaire without the participation of the French state;

Meat factories can only be profitable if they are granted minimum sanitary requirements. We will not forget the public subsidies allocated by the common agricultural policy;

The last two cases (the prison and the pharaonic train station) have as their main characteristic that they are financed by public money, even though they go against the general interest.

It is high time to open our eyes to a reality that has long been hidden by economists: the large size of a project often ensures the prestige of its designer, but even more often it leads to diseconomies of scale that, in the long run, compromise its operation. In the spirit of the British economist Ernest Friedrich Schumacher, I believe that « small is beautiful ». In French, there is nothing like a project, an achievement, an organization or even an institution, on a human scale.