European Union: towards a « post-democratic autocracy »? 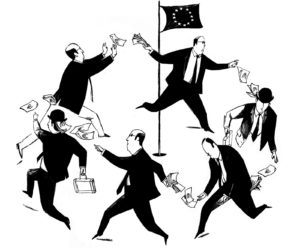 This title may seem provocative. However, it is a cry of alarm launched by the philosopher Jürgen Habermas, a historical supporter of the European integration project(1). What’s going on?

As feared, the European Commission attacked Belgium last month in the context of the European Semester, a process resulting from the strengthening of « economic governance » at EU level. On the menu: 3 billion in savings by 2014, the abolition of indexation of wages to inflation and early retirement. The Belgian government may have frozen the same indexation for 2013 and 2014, but the Commission has made it a matter of principle and was only able to impose a fine because of a legal loophole (the absence of a government in Belgium during the period in question), which expires next December.

In theory, the Commission should apply the same criteria to all countries. But the political nature of these demands is striking when compared to the treatment of the Netherlands, which is equally indebted but more compliant, France, which was also asked to reform its pension system and reduce labour costs but was given a two-year reprieve, and Germany. The reaction of the latter two countries is illuminating: François Hollande said that the Commission had no business « dictating » to France how it should reduce its deficits, while Angela Merkel has not only ignored the Commission’s recommendations but recently explained that giving it new powers was not necessarily a good idea. The calls for a revival of « political union » by France and Germany in recent weeks are instructive: the two heavyweights of the European Union, who are beginning to understand that the democratic deficit of the EU is a threat both to the traditional parties in the upcoming 2014 elections and to the future of the European project itself, are calling for a strengthening of economic policy coordination at the level of the States (creation of a permanent president of the Eurogroup) and for a right of oversight by the European Parliament. The Commission’s demands on Belgium should therefore also be seen as a political test: the Commission is trying to consolidate its power by getting its hands on a state within its reach.

What is at stake is quite serious because the level of wages reflects more than a century of political struggles. To consider, as the Commission does, largely encouraged in this sense by companies, that the cost of labor must be an adjustment factor like any other on the altar of competitiveness is to deny this political dimension, and to leave such a central issue in the hands of unelected bureaucrats. Such a scenario is not imaginary: this is exactly what happened to the countries subjected to the Troika’s injunctions.

The Commission’s latest idea (apparently at Angela Merkel’s suggestion) is to(2)) is to generalize this model by signing « convergence and competitiveness instruments » with each state, contracts by which the states commit to carrying out « structural » reforms in exchange for financial facilities, with fines in the event of non-compliance. The idea is always the same: by weakening unions, lowering wages, forcing public services to be privatized and using all available energy sources, including shale gas, the private sector is allowed to increase its profit margins and it is hoped that exports will rise again, and with them the sacrosanct growth of GDP. These objectives are exactly those of the European Round Table of Industrialists, a high-level lobby (gathering the 40 CEOs of the largest European companies…) which had the opportunity to explain the details during a working dinner with Barroso, Merkel and Hollande last March(3). The demonstrators of the « Blockupy » collective who blocked the European Central Bank and the Deutsche Bank in Frankfurt at the beginning of June were not mistaken: in the name of a budgetary crisis largely caused by the banks, the austerity policies aim essentially at satisfying the short-term demands of the financial markets and the employers instead of trying to get out of the crisis in a coherent and sustainable way.

The issue of government deficits is obviously a concern, but why focus only on spending cuts? The issue of tax evasion and tax havens has come back with a vengeance in recent months with the Cahuzac scandal in France, the discovery by the U.S. administration of the incredible « tax optimization » network(4) set up by Apple but especially the « Offshore leaks », a database revealing the essential role of tax havens in the explosion of inequalities since they allow the richest to escape taxation. It is by definition difficult to evaluate the sums involved, with estimates ranging from 6,000 to 32,000 billion dollars! That is, for the latter sum, nearly one third of the world’s GDP. The main Western governments are increasingly concerned about the issue, the most active on this subject being for the moment… the USA. What does the European Commission think?

As always, the company is short on internal expertise and is creating a working group on the issue. The problem is that a number of EU countries are themselves tax havens (starting with the British Overseas Territories and the City of London, Luxembourg, Austria, Cyprus, Malta, while Belgium and the Netherlands have certain characteristics of tax havens in terms of taxation of capital and capital gains). The composition of this expert group is an important indicator of the Commission’s ideas: the previous groups were overwhelmingly composed of financial market professionals, representatives of multinationals and tax experts for whom tax consulting is an important source of income (starting with the American « big four »: Deloitte, KPMG, Ernst&Young and PricewaterhouseCoopers)(5). Have things changed under the pressure of events? Judge for yourself: in addition to five NGOs, there are five business representatives (Business Europe, American Chamber of Commerce, International Chamber of Commerce, BDI — German employers — and Medef — French employers), four representatives of professional associations of tax advisors and a Swedish professor of tax law. Asking the wolves for advice on sheepfold locksmithing is a kind of indulgence that Belgium could really use.