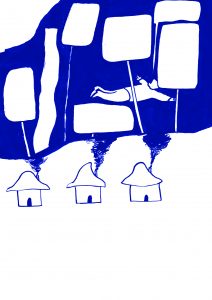 It is impossible to know, at the time of writing this column, if the general confinement will have been lifted, if the ugly virus will have left for other skies — as far away as possible, we can only hope — and if this long period of uncertainty, of fears of all kinds, founded or not, will have ended. In any case, one thing is sure: this long moment will have been the occasion for many of us to go there, on social networks, where beautiful discussions and real exchanges were held, of considerations which all go — except for the endless nonsense and trivialities that we will have had to undergo again — in the same direction and that we will certainly find here, under other pens than mine (which does what it can).

One could summarize these exchanges and wishes with this formula, rough and without appeal, but which says what it means:  » The bullshit is over, we move on ». We can also remember the famous Year 01 of Gébé in the weekly magazine Pilote, in the wake of May 68, from which a film was made that marked my generation. We have seen, in fact, throughout the past weeks, people forced to remain wisely cloistered at home, others forced to go to work with the risk of proliferation of the epidemic among and between these workers, some of whom, for these reasons, have gone on strike or simply deserted their posts. To the great displeasure of the entrepreneurs and the soft heads of the economism at any price who shouted and saw in these desertions the damage of their profits and their dogmas. The slowing down, or even the stopping of many activities, the fact that, for those confined unwillingly but showing a remarkable civic-mindedness, the usual compulsive purchases were no longer more than strictly necessary, all this had indeed the effect that, generally speaking, the great machine of a long time driven by the pseudo-necessity of consumerism found itself practically at a standstill. And, curiously, no one seemed to complain too much about it among the first concerned: the consumers of everything and anything.

One will have noticed — the testimonies coming from everywhere will have confirmed it — that, because of this general slowing down of the activities and the movements — practically no more cars in the streets, less and less planes over our heads — suddenly the air was more breathable in the cities, that the atmospheric pollution was everywhere decreasing, finally, that it seemed well that, in the zones usually cluttered with the thousand toxic substances which attacked our organisms, one could cheerfully open the windows to let enter an invigorating and repairing air. On the other hand, of course, it is no longer lost on many people that this observation irrevocably condemns the entire system, a whole world which, until now, has been the cause of all kinds of upheavals for which we are now paying the price. Numerous studies show, in fact, that the regions most affected by the spread and extent of the coronavirus were those where industrial activity was the most concentrated. This is the case in Northern Italy, for example, where the epidemic has developed at such a pace that our distant transalpine neighbors are the most affected.

In passing, we will point out, to laugh as much as to be offended by it, the disastrous way in which the political and sanitary authorities of France have put in place the measures supposed to counter the threat of a catastrophe of which they were nevertheless warned, as early as before January, by the voice of the former Minister of Health, Agnès Buzyn, who, in an interview with the newspaper Le Monde has, as they say, « dropped the ball »; the moral and penal responsibility of the high spheres of power is clearly established. In the same way, there as here, the austerity policies of the last few years, dictated by the European community and applied with enthusiasm by the different governments that have succeeded one another, have targeted the whole of what was still left of social protection, including public health. We will remember the way the police forces in France treated the health care personnel during the demonstrations that denounced the catastrophic loss of infrastructure and personnel in this field, which is so vital for the community.

The bullshit is over! We need to move on! It would be necessary, from now on, that what the society counts as possible opposition forces start to move. In theory, first of all, taking advantage of the time we are given to do nothing else but think, each and every one locked up in their apartments, their houses. But also, of course, associations, groups, parties, clubs, as in 1789, confined for the moment and dispersed. Everywhere and untiringly, thought must dominate and show its face. That they are published and massively shared on social networks — what a weapon, also, at the disposal of this objective! — ideas, addresses, admonitions, angry cries, claims of all kinds. Because, yes, obviously, thousands of people are becoming aware that the infamous neo-liberalism and its procession of senseless measures in the fields of production, of what is produced, of what is necessary as fossil energies and others for this production, that the fate of the weakest that its own logic produces is unbearable; that it will be necessary absolutely and everywhere to invent and set up all the imaginable alternatives and this, in all the fields which touch the life of all and of all on what became our unhappy planet.

But it is necessary, by all means, that these demands and the multiple alternatives that could, for example, take the form of a  » solemn address to all political parties and their representatives « This would be written by the country’s moral, scientific and other personalities — a kind of Committee of Wise Men — who, for a long time, on a good number of media, have been alerting and proposing the ideas resulting from their research and their conclusions. Of course, our example should also be followed elsewhere, by our neighbors to the north and south, and that within them, similarly, this appeal should be of the same magnitude, since everything is linked and it is only universally that the change of course should be able to take place. Moreover, I would like to launch the idea of a demonstration — the confined could finally stretch their legs — in the streets of the capital — and why not simultaneously in Paris, Berlin, Rome, Madrid… — as soon as the dramatic episode that we are living today will be over and the alarms will be calmed. A large-scale demonstration that would bring together pressure groups, associations, workers’ unions and the multitude of those who aspire to something else and who want that something else to happen. I call on all consciences, on all the best wills so that this project takes shape and that, from now on, those who have the desire and the power to do so, speak to each other and exchange wherever possible.