Diabolical duo of contempt and misunderstanding 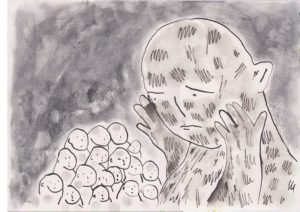 Citizen reader, don’t be mad at me! I didn’t want to speak out and give my poor opinion on important issues anymore. But the news of these last weeks convinced me that I still had to dip my pen in the computer inkwell of a computer to which, out of respect and openness, I learned to speak in its language. I won’t stoop to reproduce myself here, I would be rather afraid that you would take me for one of these pedants that we like to make fun of or, on the contrary, for one of these uneducated gougnafiers that France-Inter makes fun of almost daily in a program broadcast in the afternoon and of which one of the hosts distinguished herself by showing a total disrespect for a pseudo-candidacy of a pseudo-politician who is not yet a politician, but who is saying things that are pleasing.

So instead of listening to the radio, and hearing rotten imitations of the Belgian accent (which doesn’t exist), mockery of right-wing voters (which comes from a kaleidoscopic prism of opinions), top-down looks at Asians, the poor, the Yellow Vests, Africans, the elites, the wealthy, the powerful, I started reading newspapers. Caramba! I was told about demonstrations of caregivers (who are often discredited, except when you want to applaud them from your balcony), about protests against the impoverishment of a part of the population (which, most of the time, the media do not mention, or only in a small note), about popular uprisings of parts of the inhabitants against discriminatory measures. And, between two fiery accounts of protests seen from a rarely journalistic angle, I come across the interview with Cécile de France (initially despised because she is Belgian in the beautiful city of Paris), the interview with Pierre Rosanvallon, a sociologist, who declares that  » contempt has become systemic in our societies « , which indicates that this tendency has become not epidermal and local, but global and more frequent than we think, but also the interview with one of the editors of the Point, Sébastien Le Fol, who published some time ago — because he himself had been concerned, but not only —  » Stay in your place! « where we learn that (snif) Nicolas Sarkozy (re-snif) has also been the victim of a class injustice, of a discrimination due to his origins, in short: to contempt. One may object that it is easy (but I dare) to look a man like the former President of the Republic from top to bottom, staring at him (all the more easily as this was done when he was young, so perhaps even more majestic despite his, shall we say, rather small size). Nevertheless, it opened my eyes to this word heard more and more, as articles, books and events unfolded.

It will not surprise us to know that this contempt comes from the verb to take. Literally, one « takes badly », i.e. one gives a value, a consideration, less than to others. The word « contempt » comes in a commercial sense to give a price lower than that which the thing, or the good is worth… Bloody capitalists! Again, a question of money and price. Yet, such is the grim truth: to despise someone is to give him a lower (or different, but rarely in a positive sense) value to another person, good or social class than he really deserves. In essence, contempt is therefore consubstantial with societies organized in social classes: I am told that, for once, this is not a Western-European affliction, but that it can also be found in peoples from other parts of the world. Finally, here is a negative point that can be found everywhere. Contempt, to put it another way, is almost as normal a process as stereotyping or prejudice. Contempt must be re-evaluated afterwards and lead to balance. This is called theory (you know, that wonderful thing that is almost never followed by practice). What is problematic is when this provision, theoretically very temporary and only on a commercial register, becomes permanent, maintained, and especially placed on a moral level. It will be recalled that the term « barbarian », which initially and only meant people who did not speak the Greek language and were not understood, ended up becoming a synonym for « strange, uncivilized ». Funny shift in meaning, cleverly nurtured by the elites or leaders — hello, Macron, Trump and even De Croo with his famous find of the « unvaccinated epidemic »? This contempt, voluntary, maintained and prolonged, has only negative and toxic connotations for a society that wants to be democratic, in which each and everyone should be able to express themselves without being rebuked by someone who considers himself superior. But that’s still theory and it doesn’t carry us very high. Contempt so installed that it has given a verb, « to despise ». Contempt sets the tone for a very fragmented society — even if it is not basically a class society. Contempt is a notion that spreads as fast as globalization and bad communication that transmits information and pseudo descriptions in all directions. Kairos was, by the way, often a victim of it.

As for me, I would prefer the term misunderstanding. First of all, this misunderstanding comes from a verb, « to misunderstand », often used in its pronominal form « to misunderstand », i.e. « to be mistaken ». In the theater, the word used is « quiproquo ». You mistake someone for someone else but (basically and theoretically) you don’t (or never?) do it on purpose. Above all, this misunderstanding can always be corrected, modified, in contact with the other person and his or her reaction. We are far from this contempt which settles, even insinuates itself in our language, in our attitudes, in our behavior with others: if contempt is an often deep mental process, the misunderstanding is an error which does not lead to definitive consequences (and offers the advantage of being able to constitute the material of a good story at Christmas between two good old stories of the grand uncle). Naturally, my opinion is my own, but it may seem relevant to privilege the fight for to the fight against; the misunderstanding that one can rectify by modesty to the contempt that one does not want to rectify by excessive conscience of its own value.

I would therefore propose changing the famous Latin adage  » Errare humanum est, perseverare diabolicum  » (To err is human, but to persist in doing so is worthy of the devil) by « Misunderstanding is human, contempt only leads to division ». A real breath of fresh air in this burning news of contempt and anger(1)…