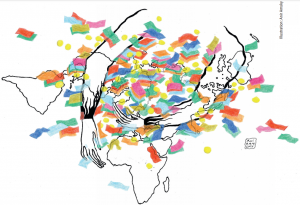 March 2020 outbreak of the crisis, which crisis? The social, ecological, economic and civilizational crisis… which was already very perceptible? Or rather the health crisis following the global coronavirus pandemic? To these numerous crises that we no longer know how to name, how to define, we can add the bracketing of the economy following the coronavirus pandemic, which generates an economic crisis and a debt crisis that had been brewing for years.

In public debates, on the so-called social networks, discussions are multiplying about the « post-crisis ». Most of the speeches suggest a crisis in the form of a parenthesis, during which one could reflect on the post-confinement period, taking in the words of Macron, who called for a change of imagination. Some thinkers (the masculine is used expressly) would have concocted a plan for a better world, a transition applied to all sauces. Yet, as Romaric Godin, a journalist at Médiapart, explains, the economic and financial situation since the global crisis of the previous decade was far from improved.

» The current crisis may be tougher than expected. It is more violent than that of 2008 and, unlike the latter, the Chinese economy, which had supported most of the recovery through very aggressive and ecologically disastrous stimulus plans (through overproduction of cement or steel, for example), no longer seems able to play the same role. Financialization also continues to reduce the impact of policies on the real economy by capturing a large part of the profits from the latter. « (1)

Among the many elements intertwined in the global economy, debt plays a key role. The sharp reduction in economic activity for several months caused by the coronavirus health crisis has brought the painful issue of debt back into the public debate. However, although based on a very complex system, decisions about debt and repayment are primarily political. Hundreds of collectives, and even elected officials, have called in recent weeks for the total and unconditional cancellation of the debts of countries in Latin America, Asia and Africa. In Europe, debates on the mutualization of debts and financial media assure that debts are not a problem because interest rates are low (policies encouraged by the European and American central banks).

On May 13, an initiative led by Bernie Sanders and supported by 300 parliamentarians from around the world sent a letter to the IMF and World Bank calling for full debt forgiveness for International Development Association (IDA) countries by all major international financial institutions (IFIs). The United Nations predicts that the coronavirus crisis could increase global poverty by half a billion people, or 8% of the world’s population. The World Food Programme (WFP) estimates that the number of people on the verge of starvation due to the global economic crisis could double from 135 million to 265 million due to the pandemic. 64 countries currently pay more for debt service than for health care.

MACRON AND HIS AFRICAN INTERESTS

President Emmanuel Macron, after putting on his warlord clothes during his first crisis speech, changed his costume during another presidential address to announce a massive cancellation of Africa’s debts. An announcement that made a lot of noise, repeated all day long in the international media.

On April 13, Macron announced that he wanted to  » massively cancel the debt  » of African countries. However, the G20 countries, including France, have just suspended some of the repayments. While 200 organizations from around the world are calling for real debt cancellation to enable the countries of the South to cope with the crisis, in the final communiqué of the G20 finance ministers and central bank governors of April 15, there is no trace of a « debt cancellation ». massive cancellation of African debts  » proclaimed shortly before by the French president. The decided suspension is only partial and very temporary. Partial because it only covers €12.8 billion out of a total of about €30 billion in expected reimbursements in 2020. Temporary because this suspension is only for this year’s scheduled refunds. And these are not cancelled but only suspended: they will have to be paid in 2022, spread over 3 years and higher interests can be requested.

The grand announcement is not a cancellation. It is likely to be accompanied by an increase in the debt burden in the medium term. By refusing to cancel all or part of the debt of poor countries, the international financial institutions and rich countries are concocting a future of debt and aggravated structural adjustment plans.

Between 2010 and 2018, the average public debt on the African continent rose from 35% of GDP to 60%. So much so that the number of states in « debt distress » or at high risk of debt distress according to the IMF, now stands at 33, twice as many as in 2018. This is the case in Sudan, the Democratic Republic of Congo and Cameroon.

A rise in indebtedness largely fueled by the rise in commodity prices and by China’s loan offers, which have led many countries in the Global South to take on massive debt over the past decade.

The IMF is acting as a fireman while it has been feeding for decades the embers of the weakening of so many countries of the South through privatizations, deregulations and primarization of their economy (to obtain foreign currency to pay back odious and colonial debts). He estimated in mid-March that  » given its health nature, the current crisis should be ‘shorter’ than that of 2009 « . The IMF, which has also been alarmed for several years about the increase in debts and the imminence of a financial crisis, is now being reassuring in order to preserve and make this wobbly system last. When the institution claims that it is urgent  » to protect the weakest economies that depend on global growth « (2), it will unfortunately not be a protection that would involve cancelling illegitimate debts and safeguarding local economies.

As calls for debt cancellation multiply, confusion reigns in the vast majority of media outlets, which brandish cancellations as a threat and at the same time refer to debt restructurings as cancellations. Restructuring is usually done to protect the interests of creditors. On the other hand, a unilateral break-up and suspension approach with the creditors would allow the balance of power to prevail.