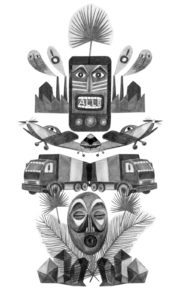 The year 2013 has passed and with it the flood of sms messages sent from millions of cell phones around the world. From emails to e‑cards, the new year is now celebrated in 2.0 mode. These attentions, which have replaced the traditional greeting cards in a very short time, show how much computers and electronics have invaded our daily lives. In a few years, information and communication technologies have become so ubiquitous that it is difficult to imagine doing otherwise. And yet, if we were to be shown the path that certain minerals have taken before arriving in our MP3 players, our computers or our mobile phones, the wishes would have a bitter taste.

The journalist Christophe Boltanski has made this journey for us and tells the story in his novel « Minerais de sang » (1). In a personal style mixing political and judicial intrigue and journalistic quest, the author takes us on a journey on the tracks of cassiterite, the main ore of tin, which is found in all the electronic equipment that populate our stores and homes. Tin is everywhere, says the great reporter of the Nouvel Observateur, « PC, MP3, cell phones, PlayStation, digital camera, decoders, radio, hi-fi, scanners, printers, cars, airplanes, everything that includes electronics, all our modernity contains a trace » (2). For two years, he followed a rock and tried to make all the people linked to his business talk: to trace the chain, to draw links, to understand the networks.

The young miners of North Kivu(3) are the first victims of the cassiterite trade. Living in inhumane sanitary conditions and under pressure from armed groups, they work in the bowels of the earth for days on end for almost no pay. Many soldiers demanded their tithes and did not hesitate to use violence. Since the Rwandan genocide in 1994, the region has seen a massive influx of perpetrators of massacres, fleeing their country and justice. These rebel groups serve the interests of neighboring countries as well as large Western multinationals. With cassiterite, we enter the world of post-colonial slavery and geostrategic conflicts.

From the hills of Bisie, the miners loaded with dozens of kilos of cassiterite took a difficult and dangerous route through the territory of Walikalé to reach Njingala (50 km away) and its traders on foot: « It was only a draught, a place of passage. As soon as the middlemen had collected nearly two tons of cassiterite, they would charter a plane and ship it to their bosses near the border, in Goma or Bukavu. (4). A hundred kilometers separate these cities but the road infrastructures being more than deficient, it will finally prove to be more practical to send the goods in old Soviet cuckoos, piloted by obscure barbouzes with Slavic origins. The cassiterite is mostly delivered to Kigali (Rwanda) on behalf of Mineral Supply Africa (MSA), a company run by an Englishman, David Bensuan. 80% of its production comes from the Congo, and its value increases as much by the distances it travels as by the treatments it undergoes, thus concentrating its tin content: « 3 dollars in Bisie, 6 dollars in Goma, 10 in Kigali. Something to ponder on the capitalist mystery of price formation. (…) The margins, on the other hand, increased geometrically as one moved away from the place of production. A feature often seen in the case of raw materials (5). »

The cassiterite’s journey is far from over; from Kigali, it leaves for the Tanzanian port of Dar es Salaam, this time in a French truck: the SDV, the logistics branch of Bolloré (6), is in charge of delivery. The cargo is then shipped on a container ship to Malaysia, a large high-tech factory. While the country once enjoyed a golden age of mining, the Malaysia Smelting Corporation now buys most of its cassiterite in the Great Lakes region.

Christophe Boltanski discovers, in Ipoh, the former Malaysian capital of tin, two soldering factories, one Japanese, the other German. The latter, Henkel, has long been sourcing from the Malaysia Smelting Corporation. When the journalist tells the story of cassiterite (and its suffering and conflicts) to one of the workers at the plant, the latter exclaims that he understands why the management in Düsseldorf has asked them to find metal elsewhere. Indeed, this decision comes almost simultaneously with the imposition of new rules of conduct and the implementation of the Dodd-Franck Act in the United States, which « requires electronics companies to disclose the origin of cassiterite, coltan, wolfram(7) and gold contained in their devices to the Securities and Exchange Commission, the U.S. stock market regulator. If any of these minerals come from the Congo, then they must demonstrate that it was not purchased from an armed group. » (8) It is difficult to judge the effectiveness of such a measure on the working conditions of miners.

While NGOs such as Global Witness are trying to force companies to change their behavior and encourage legitimate trade that benefits local people, Henkel’s welding wires are being shipped to Antwerp and Shanghai, where they will be distributed once again to other cities, and other factories.

After a life shortened by programmed obsolescence, the electronic equipment will return to the African continent, to Ghana(9), in particular. The true story ends in a dump in Accra. Puny children with respiratory problems spend their day melting down European and American electronic waste to recover the copper and sell it to a smelter.

From the mines to the dump, these technological metals take with them the lives of entire populations. This is how the loop comes full circle like a snake biting its own tail.