COVID-19 WAS WORTH A CARNIVAL 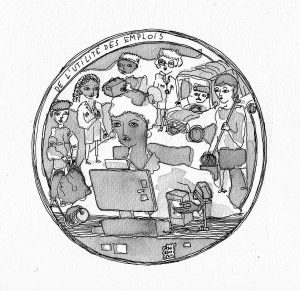 One of the first shocks of the crisis was the cancellation of several carnivals. So, a « little » flu was going to get the better of our age-old traditions? After thinking about it, we did have a carnival, and a big one. Perhaps even a Dionysian tragedy. But what will be the outcome?

In ancient Greece, tragedy was first a religious festival celebrated at the beginning of spring. It was dedicated to Dionysus, a strange god, sometimes considered foreign, known as the patron of collective trances and heady drinks. Like our carnivals, the Dionysian festival announces the rebirth of nature, while making us feel the fragility of the social order. As if to remind us that the vital and intoxicating power of nature and plants is not without its risks. And that the city cannot be totally preserved from the wild world. That of the forests, of the wild animals. And viruses.

What Dionysus brings to the city is a moment of shared intoxication and a temporary overthrow of the established order. In the tragic work dedicated to him by Euripides, Dionysus takes possession of the spirit of all the women of the city of Thebes, who immediately leave their homes, abandoning husbands and children to dance and sing in the mountains and forests. This abandonment of the city by the women, who suddenly free themselves from their duties and their submission, causes a brutal and unexpected upheaval. This is the starting signal for a succession of reversals and blurring of order and hierarchy. Between man and woman, but also between the powerful and the weak, the rich and the poor, the civilized and the savage, the cultivated and the natural space.

Like the Dionysian trance epidemic, the covid19 virus threatens and subverts (temporarily?) the established order. We suddenly realize that the most essential cogs of our societies reside in the most modest and devalued functions: nurses, cashiers, heaters, carpenters. Often these functions are performed by women, who are known to be less well paid and underrepresented in management positions. It was once said that women had a secret link with nature. It is politically incorrect. But historically relevant. Because through the oppression of women, starting with the witches of the past, it is indeed a link with nature, its laws, its powers and its risks, which was occulted, minorized or destroyed(1).

Dionysus is a god who emerges from the wilderness, from the forest, as an emissary of the goddess Artemis, agile and pitiless hunter, patroness of natural worlds with intertwined destinies and futures. For his enthusiastic followers, Dionysus is the purveyor of a sweet and happy trance, of a harmonious union with the god and nature. But for the inhabitants of the city, it can be as disastrous as beneficial, because it brings the threat of a disorder without return, of an irreversible destruction. In Euripides’ tragedy, Dionysus will make Agave, the mother of King Pentheus, commit the irreparable. Believing to have killed a wild animal while hunting, she stuns the city by brandishing, full of joy and pride, the head of her own son, which she takes for the trophy of a lion. The link of Dionysus with hunting, an activity that confronts man with nature, expresses in its own way the risk that Dionysism invites us to inhabit. It is the risk that the hunter is hunted, that man becomes the animal, that a deadly violence falls on the society(2).

ROGUE LINKS WITH THE WILDERNESS

This link with wild nature and hunting, which invites itself into the city to remind it of its fragility, seems obvious to us in the current pandemic. Dionysus takes the women to the hunt in trance. It is while thinking of hunting that they slaughter and dismember the king of the city. The link between Covid-19 and hunting has been demonstrated. This time, it is not the corpse of a wild beast that brings disorder to the global city, but that of a bat or a pangolin. China’s urban sprawl has precipitated the disruption of ecosystems, created unstable boundaries, and generated disrupted exchanges between humans and their natural environment, leading to the explosive spread of diseases(3). Just like Dionysus in Thebes, the virus presents itself in the global city as an emissary of a wrathful nature. And all this makes the economic order tremble on its foundations, the crowned virus threatening to overthrow the crown of financial capital, which is enthroned without measure on the world.

Finally, we must remember that Dionysus is a masked god. The allusion to the tragi-comedy of the millions of masks that our hospitals and pharmacies lack is almost too easy. It is especially the uncertain and dual nature of the individuals during the Dionysian orgy, which strikes by its analogy with the way the virus progresses. As at the carnival, ordinary citizens now advance in masks and their blurred identity carries a disturbing duplicity. From now on, the question is: is he or is he not contaminated? is it or is it not possessed? No longer by the fury of the god of the vine, but by the viral load of Covid-19.

Thus, the carnival, the Dionysian procession, is a small part of Society against the State, to take up the title of a famous book by Pierre Clastres devoted to the forest societies of Amazonia. For tragedy, as a dramatic form, laughs at our pretensions by exposing the cruel downfall of the powerful, and more particularly of all those who transgress the limits of their human condition, such as King Pentheus who thinks he is a demigod. This intractable mistrust of the ancient Greeks towardshybris (excess) is a red thread in the intellectual life of the Greeks. Buthybris is undoubtedly also a dark sign of the drift of our time, when the imperative of profit, alien to any measure, makes us cross the limits of the biosphere at high speed.

However, the aim of the Dionysian rite was not the destruction of the social order nor the definitive overthrow of power, but rather its regeneration, its purification through a form of wild warning and festive revolt, which shakes up certainties, reveals excesses and corrects the impious arrogance of the powerful. Dionysus comes from the deep forests and barbaric lands, to remind us that we are only human and that we must be content with the simple magic of everyday life. The taste of the other, the flavor of wild fruits, the joy of wine. It invites us to a pacification with ourselves, the nature and the others, by relativising the borders of the social organization (by the festival, the disorder, the music) and of the personal identity (by the drunkenness, the disguise, the sensuality).

The ancients had the resources of a vision, if not truly animistic, at least inhabited by this world. Their polytheism opened to the plurality of spaces and ways of life and knew how to awaken the attention to the consequences of our acts. They heard signs that we no longer perceive. They knew the exercise of reading and interpreting these signs of nature and fate. They were sometimes ready to make decisions about action.

Certainly, a wind of change seems to be blowing these days, calling for a return to necessary, sustainable, local things. But can we really hope that once the crisis is over, we will not rush back to the order of the « experts » and the big « economic actors » to find a security solution that avoids any deep questioning? Nothing is less certain, as we are so lulled by the promises of innovation and addicted to technological solutions. Solutions that involve more and more control, surveillance and technocratic management, algorithms, automation and the digital economy. No more personalization that isolates. No more « social distance », an expression that says so well our political impotence, consecrated by the liberal culture. No more resignation. And less carnival?

Max Lower, from the blog symbiosphere(4)