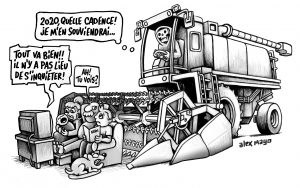 In The Plague, Albert Camus has a priest, Father Paneloux, speak. He evokes the plague as a « redemption », in other words a punishment from God, but also an opportunity to be better; then at the end of his preaching, he castigates a chronicler from Marseilles because he thought that the plague having struck Marseilles in 1720, killing more than half the population, it was thehell, and only that. In fact, the opposition is only apparent. In both cases, we are faced with the same Christian vision, on the one hand the opportunity for redemption, on the other hand hell, only heaven is missing. But for us degrowthers, this episode of confinement, was it redemption, as in the Apocalypse according to St. John, or hell, or better yet, Paradise, as if we had almost reached our goals? Did it bring anything new?

The containment was first a great sanitary mobilization, but it is not new. After the Chernobyl accident, the Soviet state had managed to mobilize many people:  » 120,000 people were evacuated from the forbidden zone, 600,000 « cleaners » and medical personnel were dispatched to provide emergency relief. In the first month, 40,000 conscripts of the Red Army were called up. In Ukraine, doctors examined 70,000 children and more than 100,000 adults during the summer following the accident. Over the next few years, they would perform more than 500,000 medical examinations. This mass sanitary treatment was probably one of the most important ever carried out, before it was largely surpassed, both in size and in coercive intensity, by the one implemented from the end of January 2020, in the face of the Covid-19 pandemic(1). « There have always been epidemics throughout history: leprosy, cholera, plague, etc. The latter, in particular, regularly returned to Europe every 10 to 15 years. The cessation of its « eternal return » after that of Marseille in 1720–1722 corresponds to the emergence of the ideology of Progress and modern medicine. Finally, the dying person will give way to the sick person — the one who can be cured -, the Church, the hospital and the State. Today, with the containment of 3 billion people (a first in the world!), a new step has been taken: the epidemic is once again a historical actor, reminding us that we have entered the « age of risk  » and that the « age of progress » has ended. Before the emergence of the industrial society, there have always been risks, but they were due to the concentration of men in one place or to natural causes. With the industrial culture came those related to the production of goods. The political economy has been able to prevent an awareness of the consequences of pollution, notably on the precariousness of the survival of humanity, and not only of individuals. Beyond a secondary debate on a virus that escaped from a laboratory or a market of

In Wuhan, we know that, since at least the beginning of the 21st century, epidemics originating from zoonoses have multiplied. In other words, the growth of the mass of human beings increased by that of domestic animals is done more and more at the expense of the wild, forcing some animals to come out of the forest; this results in the proximity and the propagation of viruses that would have remained in the wild if they had not been brought out. In 2003, the first epidemic alert arrived, the H5N1 avian flu or SARS. The French government responded by launching the creation of EPRUS(2), an organization created specifically to manage health emergencies by stockpiling medicines and masks, and then by organizing a « health reserve » of volunteers ready to intervene. It would have been interesting to see if these administrative measures would have been sufficient to fight against Covid-19, but unfortunately the EPRUS was dissolved in the name of a liberal management of health and risks, i.e. by ignoring the precautionary principle. Besides the fact that in a liberal society such as ours, for an economist a stock is above all a cost, it is generally denied that the industrial society creates at the same time goods and more and more risks…

This pandemic was nevertheless the occasion for many to feel once again the presence of death, which had been constantly pushed back since the Industrial Revolution, first to the outskirts of cities by moving cemeteries there, then to hospitals. However, death is no longer the inescapable consequence of epidemics, and for some, including transhumanists, it has become almost a « disease » that could one day be cured. In any case, hospitals have played the leading role in this crisis(3). In a sense, it was both a reminder of the existence of death and the triumph of its sanitary treatment. The problem is that everything has been done to avoid talking about the finiteness of everything, the irreversible loss of matter in modern production, and especially the destruction of humanity and life. In a way, only the man-individual can die, but humanity, life, still risk nothing. This is a certainty that no authority has tried to shake. And yet, the proponents of degrowth keep warning against a possible disappearance of humanity and all life because of productivism. The confinement has certainly put a stop — even temporarily — to this acceleration of everything and to the mobility characteristic of this consumerist civilization in which we live. On the face of it, it could be a matter of decline: slowing down, significant reduction in greenhouse gas emissions, oil consumption and even electricity consumption. The confinement was an isolation, certainly, but experienced, at first no doubt, as a  » rest  » for many stressed workers. However, it is only half-tone degrowth, false degrowth, or even « capitalist degrowth » as there is « capitalist relocalization ».

Faced with the inevitable recession, the French government has released billions of euros in aid, especially for the large companies listed on the CAC 40, but this aid is not accompanied by ecological conditions. There has also been a lot of talk about « relocalization », but in the capitalist version, not in ours. One can only be skeptical about the type of relocation envisaged, i.e. made to reduce costs following the implementation of robots that are cheaper than an Indian, for example, or for reasons of service quality. The worst is when it is mentioned for medicines, when we had delocalized their production to India or China precisely because we wanted to avoid paying the costs required by the management of pollution, as in the case of analgesics. Does this mean that the authorities are preparing to remove this obstacle in order to relocate?

For us degrowthists, relocalization is both the means and the end of degrowth. But being homebound, how could we have the means to initiate it? Moreover, this is not capitalist relocation, but open and democratic relocation implemented at the level of bioregions. Its objective would no longer be to produce value, but to satisfy needs in a framework that respects society and the biosphere, the bioregion. This relocation does not aim at bringing back production without asking the question of what is produced and how it is produced. Today, technical and scientific means are directed towards increasing productivity, not towards reducing risks. In other words, the question of risks is only asked once the products are distributed in society, instead of asking it from the start at the time of production. In this bioregional framework, cooperation between production units would be encouraged in order to avoid competition, duplication, waste of scarce resources and waste. It would certainly be accompanied by rationing. But today, this type of relocation(4) is little mentioned, which is another indication that we have not (yet?) learned any lessons from this pandemic.