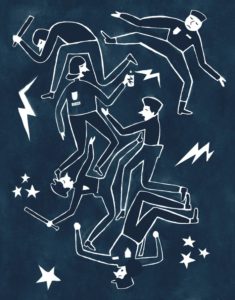 In March 2013, the Observatory of Police Violence in Belgium (ObsPol) was born, an initiative of the League for Human Rights, in reaction to the growing collection of complaints related to the acts of police officers, targeting all categories of people on the Belgian territory.

Victim of its success, the ObsPol website, announced for a launch on March 15, 2013, was the target of a strange operation: a multitude of simultaneous connections, during the night of March 14 to 15, during the last adjustments. The server could not resist: at 8am, the site displayed a message urging the visitor to come back later, the server having reached the limits of its capacity. Why so many connections, at night, when the site was not yet supposed to be launched?

Should we see in these setbacks an operation of destabilization? Some research on IP addresses, with domain name providers, showed that a computer services company, provider for a significant number of municipalities and administrations ‑among them the Police‑, had shown a particular interest for the domain name ‘ObsPol’… Our investigation will stop here, the urgency being to solve the technical problem. A temporary private server, accessible from an address that was not easy to remember, was set up to host the site for a few days, the time to rent a server abroad capable of accepting a large number of simultaneous connections. The site will migrate four days later to its final host, accompanied by a device ensuring anonymity and confidentiality of connections for the visitor.

The day after the birth of Obs-Pol on the web, the public could witness a flood of angry reactions and denigration led by the police unions: on internet forums, radio shows, in interviews, etc. The site also had to endure a slew of « false testimonies », in reality insults and messages of support for the police, submitted on the site via forms allowing the public to testify about the violence they had experienced or witnessed.

In 2010, after having collected numerous testimonies of the massive arrests of the No Border Camp people (see article ‘The protest undermined’), the question arose: what to do with these frightening testimonies, so that they would not be forgotten?

When the question was broadened, the alarming fact became clear. On the one hand, few public spaces, outside of associative circles, give a voice to victims of violence by law enforcement, leaving them in isolation from the trauma they have experienced. On the other hand, a large number of the stories collected never make it to the complaint stage, for various reasons, including the difficulty of going to the police station in front of police officers, ignorance of the procedure to follow, or even fear of repercussions. The feeling of impunity is hardly surprising, and many victims are reluctant to press charges.

In addition to the lack of signs to identify police officers during illegal actions, they also have an unfortunate tendency to file a complaint as soon as a complaint is filed against them(1). Even when the case ends up in court, police officers are more likely than the average person to receive a suspended sentence(2). Recently, for example, an undocumented immigrant who was raped and abandoned in the woods of Gosselies filed a complaint against three police officers. They were convicted in the first instance and have just obtained a stay of execution on appeal(3). Some abusive and even murderous police officers are not removed from their duties and continue their « work ». It is enough to refer to the scandal in Antwerp in 2010 to realize that the problem of impunity creates a shock in the opinion, a mistrust towards the institution. Jonathan Jacob, a young man of 26, will die massacred under the blows of many policemen, while he was locked in a tiny cell, harmless. The facts are known by the diffusion of the images, by the father of the young man, who declares not to have any confidence in the authorities(4). Unfortunately, these two examples are far from isolated.

In view of this, the creation of a service control body was necessary. Some will say that they already exist: the Permanent Committee for the Control of Police Services (Comité P), and the General Inspectorate of the Federal and Local Police (AIG), but these bodies are by no means independent and lack transparency. The AIG is the internal control body of the police, composed of police officers from the same corps as the controlled officer. The Committee P, a police control body, is a place where you can file a complaint if you are a victim of police abuse. This institution has been repeatedly criticized for its lack of transparency and objectivity, including by the United Nations Committee against Torture and Inhuman and Degrading Treatment, which deplores « persistent allegations of abuse of violence by law enforcement officials. This organization calls for « thorough, independent and impartial » investigations in the future(5). In fact, Committee P is composed of former police officers and does not include any members of civil society (6). Moreover, while Committee P presents itself as an « observatory for a global vision of the function of the police », it seems unable to provide detailed information on the extent of police violence in Belgium. However, it has copies of all complaints submitted to the supervisory bodies. In addition, the figures presented in the annual reports are manipulated, since a complaint file does not correspond to a case, but to an event.

Faced with this lack of sufficient legal guarantee, the creation of a police violence observation unit was therefore created.

Actions and tools of the Observatory

In order to measure the extent of the phenomenon, the ObsPol site proposes to establish a survey, at least partial, of the situation in the field, and has a triple objective.

First and foremost, it is about providing a space for information and meetings for victims and the public, in particular by providing relevant information to anyone wishing to know their rights in the face of police violence, and eventually to react. ObspPol also creates a space where victims can share their stories and connect with other victims, or advocates who can help them.

Secondly, ObsPol creates an instrument of citizen control over police abuses, firstly by allowing the collection and processing of information on the phenomenon of police brutality, in order to try to obtain a more global vision of it, free from subjectivity and clichés (exaggeration by NGOs? Underestimation of power?). The observatory examines the context and factors that encourage or hinder violence, including the relationship between perpetrators and victims, political discourse, the attitude of the justice system and institutional control bodies, etc. Obspol also observes the way in which the competent bodies control the police (justice, Committee P, general inspectorate, police hierarchy and political authorities) and act — or not — to ensure that the police respect the fundamental rights of citizens and take dissuasive sanctions — or not — in case of abusive violence, inhuman and degrading treatment.

Finally, a broader mission of the Observatory is to contribute to the democratic debate, by trying to make public policies evolve and by using this tool to generate discussions in the opinion and to question the authorities on the subject. It makes recommendations and proposals for changes in legislation, regulations or practices, to reduce violence and fight against impunity of abusive officials, felt as the most unjust by the population in general, by the victims in particular. Finally, Obspol aims to promote exchanges with similar initiatives, at the European and international levels, in order to broaden the debate and compare the findings and proposed remedies.

After one year of existence, ObsPol took stock. The results are mixed, but rich in lessons on this poorly known and poorly experienced phenomenon of police violence. It may be disappointing because of the insufficient number of testimonies received, compared to the facts observed. Without doubt, the limited promotional forces of the tool are at fault, but we also sometimes see an initial mistrust of it by a part of the population (and in particular activists and undocumented migrants). In this context, let us recall the obligation to declare one’s identity, to ensure the credibility of the information contained on the site; despite a promise of complete anonymity and confidentiality, not everyone is reassured. The limited resources of ObsPol, which is composed exclusively of busy volunteers, has sometimes slowed down the reactivity and delayed the publication of testimonies on the site, and thus the ripple effect with the victims. This number is further reduced by the filters resulting from the methodology used: a large number of testimonies collected were either definitively rejected or temporarily suspended for lack of credibility. The idea is really to have the unquestionable character for all the content of the site. However, despite the modest statistical base, the testimonies of aggression retained are as many lives disrupted, and as many unacceptable acts, to be denounced and sanctioned. Their authors discredit an institution that claims to be irreproachable, both in the training and discipline of its officers, and in the repression shown by its hierarchy towards violent officers. If we had received only one testimony, this aggression would not be less scandalous and should be denounced. In a society where violence, both symbolic and physical, is increasingly prevalent, the authorities’ share is all the more unacceptable because of the monopoly of legal violence they hold. Police violence is a proven fact, but goes unpunished in many cases. Faced with an absent justice and an indecisive policy, the civil society had to organize itself.

( … ) « We got off at our ease in the metro and we waited on the platform for a metro to arrive. As soon as the subway arrived, the doors of the subway remained permanently closed and what was our surprise that at that moment, two cohorts of police officers (helmets, baton in hand and shield) launched the assault on us. The hordes of police came from both sides of the platform, preventing us from escaping as the pace was so violent and foreshadowed a disaster for the helpless and dumbfounded demonstrators. There was no warning, each policeman seized a young person and beat him without discussion or even asking for identity papers. Some got away with pretending to be passengers waiting for the metro. The police then charged, sorting out the people on the platform: anything that looked like a young person in a sweatshirt and jeans was beaten up without mercy. The girl who accompanied me was dragged on the side, hit several times and as if that wasn’t enough, the policeman who was taking care of her, ripped the brake wires off her bike and trashed it in front of my dumbfounded eyes. They lost all control and were hitting defenseless young people in the face, it was a horrible sight and we were powerless because I wanted to help these young people, who were the same age as my children, and each time I was pushed by the police who were shouting at me ».