BUT WHAT HAVE WE DONE TO YOU*? 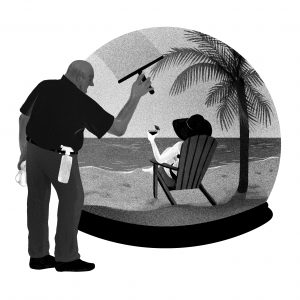 * Sentence pronounced by the television host Yvan Le Bolloc’h, French actor and musician, during a debate on pensions on the BFM TV channel:  https://www.huffingtonpost.fr/entry/yvan-le-bolloch-excede-sur-la-reforme-des-retraites-je-veux-pas-crever-au-boulot_fr_5dfa35c5e4b0969b618e4f21

A cry, among others, among thousands of others, that has been resounding in the streets of the cities of France and elsewhere for more than a year and that is taken up by the strikers, the unemployed, the millions of poor people who form the battalions of the new misery, which is spreading and swelling, everywhere. A cry and a question addressed to this elite, to this time, to this world, finally: what have we done to you, us, the already abandoned, the already almost poor or poor in the making? We the unemployed fired from any form of income, we with our small jobs at minimum wage, we the pensioners under the poverty line? What are we guilty of that you punish us more and more with each passing day?

Wherever ultra-liberalism reigns supreme, it is the same refrain and the same admonitions: it is for the good of the economy, our companies must be competitive, labor costs are too high, flexibility is the order of the day, restructuring plans and workforce restructuring are an inevitability against which we can do nothing, these are the laws of the market and they are necessary and unavoidable, bow down:  » There is noalternative . This is the ditty that is hummed everywhere in the beautiful world of a globalized and sovereign bourgeoisie, which is united with the leaders it has endorsed with the unfailing complicity of the business and financial world.

The question that arises is whether all this, the galloping pauperization, the end of public services and social security once guaranteed to all…, this operation of Finally, thebig clean-up under the pretext of supposedly necessary and unavoidable changes is the result of a reflection carried out in the secrecy of the muffled anterooms of the beautiful world. Can we imagine that these brains have seriously considered these questions and, at the end of the day, have given the order and the procedure to follow in order to get rid of these hordes of barefooters, all these mouths to feed? Some people, and not the least, who are authorities in the field of analysis and observation in these matters, are stating it loud and clear. There would be, well and truly, on the part of the bourgeois bloc, a will to put an end to the surplus represented by the tens of millions of beggars who encumber a planet that is otherwise in great danger, as climate observers and specialists repeat over and over again. The few hundred hyper-rich around the world would be building places that are relatively safe from the consequences of a possible general collapse, which they hope to escape; this is far from certain.

Now that this hypothesis has been established, we need to know how to counteract it. What weapons do the poor have at their disposal to ensure both their survival and that of the environment that belongs to all, rich and poor alike; something that is commonly and blithely admitted but contradicted by the facts (in reality, it is that handful of holders of the immense wealth that the world produces for them, who are the only owners of this world), which is ransacked, bruised in a thousand ways, wounded to death, almost, and only for their greatest profit. So what to do? What can we do, individually and collectively? Alas! Not much, we must be aware of that. Wherever people rebel, demonstrate their disagreement and anger at the injustice and excesses of princes and presidents, the response to their grievances is repression, the violence of which varies from one country to another; there, in Chile, the dead and wounded are counted in the hundreds, here, in France, the police forces, under the orders of the prefects and their minister, are having a field day with unprecedented brutality and almost total impunity, while the justice system, now subject to the orders of the government, is locking up hundreds of poor slobs wearing yellow vests, for, in most cases, minor offences. Unless we dream and wait for a globalization of discontents and expectations that would manifest themselves in a single movement, we do not see that, for the time being, things could really change. The old world is not about to change its basis, we must recognize and accept this. Any form of questioning of what is must be imperatively subjected to silence and the tongues cut off; any State, whatever its regime, is by nature and by necessity, a police State, let it be said.

For the rest, this being said of the social atmosphere, one cannot escape the fact that, in another way, the more and more pressing calls from those climate alarmists who do not stop predicting, with scientific evidence, the now fatal bankruptcy of our beautiful and enviable industrial civilization, are muzzled or taken for unimportant. At the same time, those who prevent the economy and profits from being made, alert us to the extinction of hundreds of animal species, which is taking on colossal and irreversible dimensions for some of them. Can we imagine living in a world without birds, bees, elephants or whales, without unpolluted rivers, without forests? I don’t think so. Nor you either, certainly. So, yes, we must roll up our sleeves and shake the coconut. But, alas, it is clear that the vast majority of happy consumers of big, shiny cars and other carriers of cheap goods are not about to take to the streets to express fears or alarms that are not their own. Our courageous newspaper needs 2 or 3 million readers, so maybe…